Be Advised - The years of typing business briefings and short emails haven't been kind to my writing acuity. This thread serves as my first foray into open writing in some time, and the quality may disappoint... You've been warned.
______________

A couple of months back, my girlfriend (Rachael) and I scheduled a couple of days away from work and home in mid-June. Despite being unsure of our destination, we were certain an adventure was needed, one which would be the inaugural overland trip in Rachael’s recently purchase Jeep Grand Cherokee. The first five months of this year weren’t the easiest for us - constant stresses at work, health issues and deaths in both of our families, and, speaking for myself, a feeling of uneasiness that I couldn’t quite pin down. Despite the stresses, we reminded each other daily that all things considered, we were extremely fortunate to be where we were in life, and our problems were truly “first world problems,” temporary disruptions in comfort that pale in comparison to what many people struggle with on a daily basis. While the change in perspective was helpful, our unplanned overland trip a couple months away served as the light at the end of the tunnel.

Fast forward to today, eight days from departure, and we’ve got a detailed plan of the route in place. Most of our tools and supplies are in hand or arriving later this week, and we have a shakedown run scheduled this weekend, to work out the inevitable kinks in our recently acquired and to-be-named overland rig. Coming from a backpacking and climbing background, it’s taken some adjusting to get used to the comforts afforded by vehicle support, a stark contrast to the ultralight mindset where “ounces make pounds.” Hell, I’ve done a few multi-day trips in the backcountry carrying a pack that weighed less than our new Dutch oven... this will take some getting used to.

The current route is just shy of 1,000 miles, to be driven over four full days. The first day, Thursday the 9th, takes us from Boulder to The Black Canyon of the Gunnison, a beautiful 275 mile drive through the heart of Colorado. Following a night spent on the south rim of “the Black,” we’ll head south along Owl Creek Pass, through the same meadows and basins travelled by John Wayne in How the West Was Won, and continue south to Telluride via Last Dollar Pass. We haven’t selected a camping spot nearby yet, but options abound.

After a night in the Telluride area on Friday, and assuming San Juan county’s plow crew complete the great work they’ve done over the last few weeks, Saturday begins with a drive east, up and over Ophir pass to Silverton. From Silverton the real fun starts, as we amble through the mining ghost-towns around Animas Forks, ultimately picking up the southern section of the famous Alpine Loop, and taking our time to explore the area. Arriving in Lake City, we plan to continue east towards the San Luis Valley, stopping quickly in Penitente Canyon before driving across the valley floor to the Great Sand Dunes. Medano Primitive Road is still closed due to snow, so we’ll likely camp near the dunes, allowing us to wake up early Sunday and explore the vast expanses of sand, before returning back to Boulder in the afternoon.

A large amount of work remains to get ready, but the trip has already begun to push the daily stresses and annoyances to the background, allowing the deep canyons, high passes, and cool mountain streams to begin to come into focus. Just eight more days…
Last edited: Jun 1, 2016
Reactions: Daniel Etter and O.Dfj

Great write up so far! Looking forward to more!

The route has been finalized, though we're still waiting to hear about the conditions on a few of the passes we'd like to take. Looks like the final route will be closer to 900 miles all together. 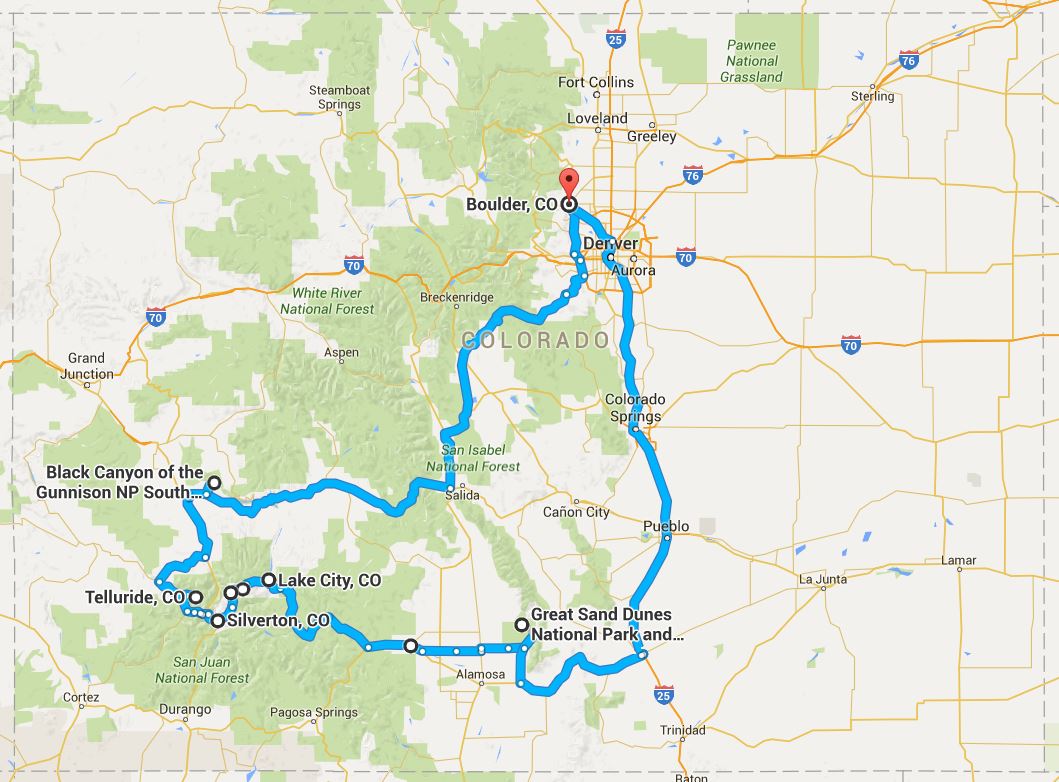 Less than 24 hours until departure, and everything is coming together beautifully. My SO picked up a Yeti cooler this weekend and we've got it pre-chilling with some beers and ice packs, the food prep is complete, and most of our gear is organized in separate bins which will make packing the car a lot easier. I also picked up a tarp and some tent poles yesterday, hopefully I can figure out an awning setup.
Reactions: Steve

That is awesome! I am heading your way on the 26th of this month. Would love to hear about your adventure and see pics as I am still in the "final planning stages myself.
You must log in or register to reply here.
Share:
Facebook Twitter Reddit Pinterest Tumblr WhatsApp Email Link
Top Bottom