Trail Guardian - Leave it Better Than You Found it

Michael submitted an Article on the main site!

Trail Guardian - Leave it Better Than You Found it

Get Yours FREE. Details Below.[/caption]...

You are tugging at my heart strings!
Great incentive program!
The world just became a little better, and will continue to do so as this way of thinking grows.
Thank You for this article!
Reactions: chuckoverland, Explore Maine, RainGoat and 3 others

This is such a good idea! I am thinking of areas to clean up and hopefully can get some jeep club members to help and introduce them to OB
Reactions: Explore Maine, RainGoat and Jeffrey Richards

Thanks!
Reactions: Jeffrey Richards and Northernlady

This is a really great way to recognize those folks that try to leave it better than they found it. I hope it spreads the idea throughout this great land and anywhere Overlanders may wander!
Reactions: Jeffrey Richards and Northernlady

Should help greatly ! so many just need the slightest bit of encouragement to do the right thing !
Reactions: B Wild, Jeffrey Richards and Northernlady

Great idea Michael. Keeping trails and back roads free of trash and abuse is always a topic of conversation when I'm out with friends enjoying the great outdoors.
Reactions: RainGoat, Jeffrey Richards and Northernlady

We do this even when we stop for a trail break. Always police the area we've camped for garbage including ammo casings, bottle caps and cigarette butts.
Reactions: Explore Maine, B Wild, Jeffrey Richards and 1 other person

I here you what an awesome idea, just this past week my dad , oldest son and I were out hunting and stopped by one of the remote camp sites. We spent an hour cleaning up all the crash . I should of took pictures, it was awful. But when it was done the camp sites were clean 4 bags of trash were removed, the fire pits were restocked with rocks awaiting the next group of campers, hopefully they'll take better care of it.


Sent from my iPhone using OB Talk
Reactions: LuxuryOverland, RainGoat, B Wild and 1 other person

Love this and the fact that this group has the culture to sustain rather than consume!


Sent from my iPhone using OB Talk
Reactions: B Wild and Jeffrey Richards

This is a great idea! :D
Reactions: Jeffrey Richards

Great Idea. I always try to pick up all the crap... I mean trash I see when I'm out on the trail.
Reactions: B Wild

I love this. I'm already doing this as part of my job , plus I'm a Cub Scout leader and we already teach this to the kids. This is great, keep it up!
Reactions: B Wild

Good job Michael. Hopefully this will motivate some more folks to get out there and make a difference.

The San Bernardino National Forest has a healthy Adopt-A-Trail program. I have been participating in that for the the past several years. I have done about 150 hours and The Varmints have racked up about 400 hours between them. It is depressing to see how some people treat our open spaces. If we can get more folks to switch from being part of the problem to becoming part of the solution that will make a huge difference. 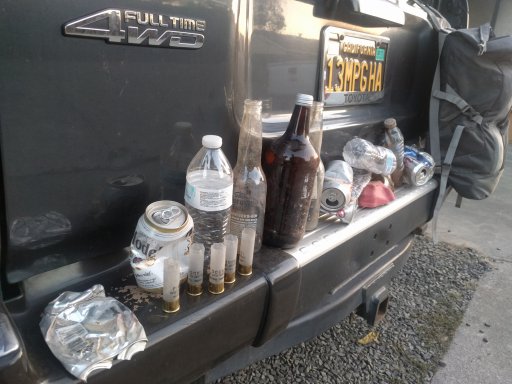 Didn't have the opportunity to set up a rally point, but this weekend, my wife and I were camping up at Berryessa, and then drove north and spent time driving through part of the Knoxville OHV park - and cleaned this stuff up.... Oye...
Reactions: Explore Maine
T

Great Idea, but not all of us have the ability to try and get the fancy coin. Some just do it because we should. Right now travelling through montana and pulled some junk from the river I was fishing. I'll do it in any river or place I'm at.

Great program. I've been following those ideals for years