now that I've had time to work some of the kinks out of my rig, I figure it's time to make a build thread. This isn't my first subaru build, but decided to go auto with this one. Having the auto tranny has helped considerably allow my small, under torque engine get me over hills and obstacles I couldn't in my previous manual rig. I started off with a 99 Subaru Impreza Outback Sport with 100k miles for $650. 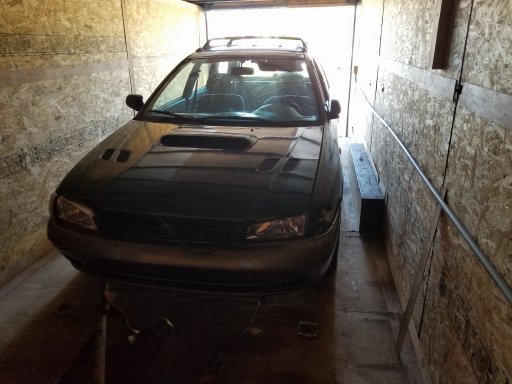 My previous rig (the Warback) is in the background. 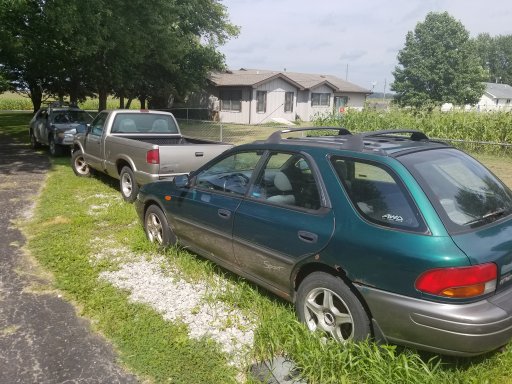 Car ran very rough and hadn't been driven in a few years. There was considerable amounts of rust on the undercarriage, but the unibody was solid. So then I got to work tearing everything apart to see what was needed. Note that there was no front steel bumper underneath the cover when I removed it. 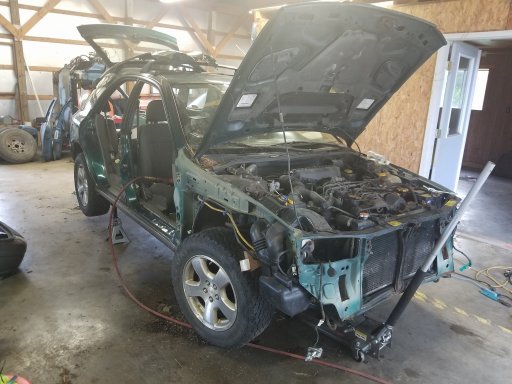 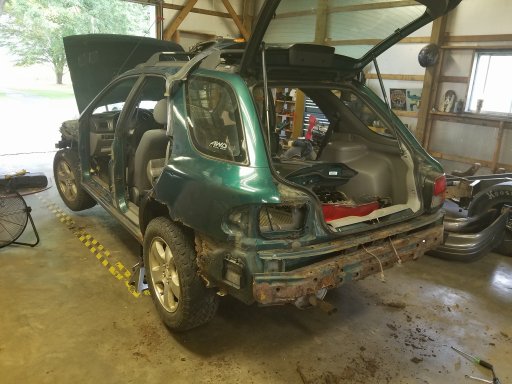 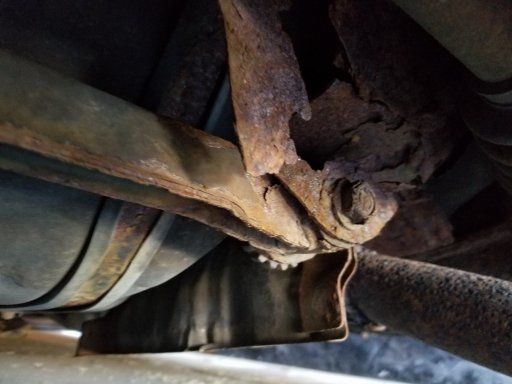 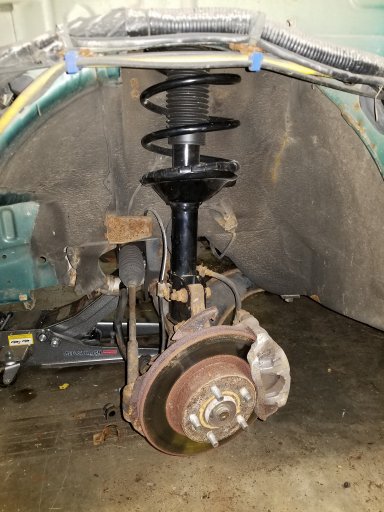 Cutting away arches to fit tires 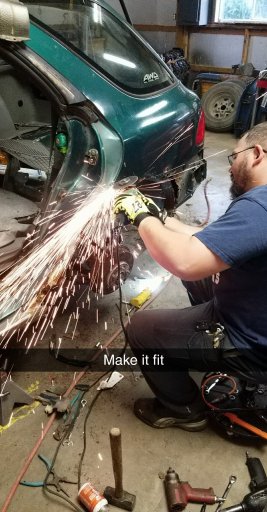 rear struts for 2.5" lift along with new rear brake lines that I broke. not pictured is the forester trailing arm brackets which help recenter the wheels after a lift. 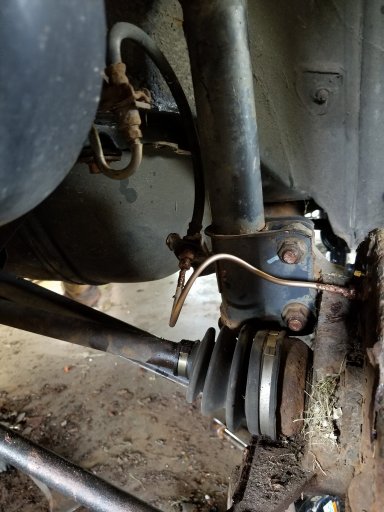 Rear subframe took the longest. here's tear down, comparison, and installed with a coating of bedliner. Gas mask was the only way to keep all the rust out of my eyes and mouth 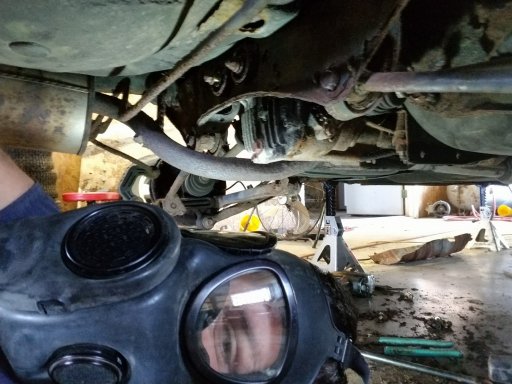 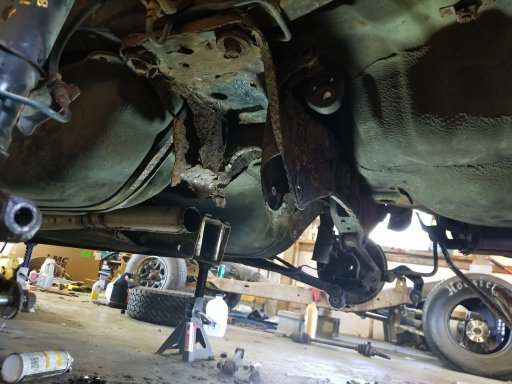 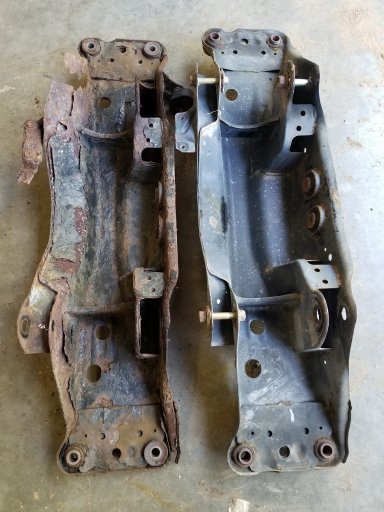 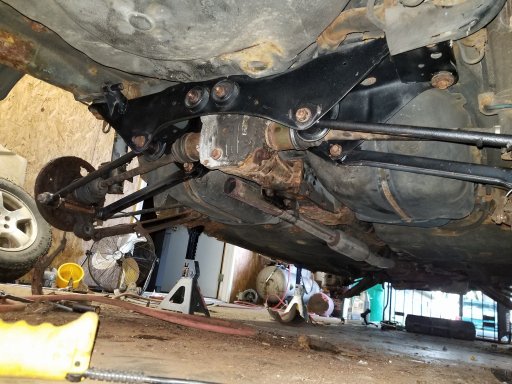 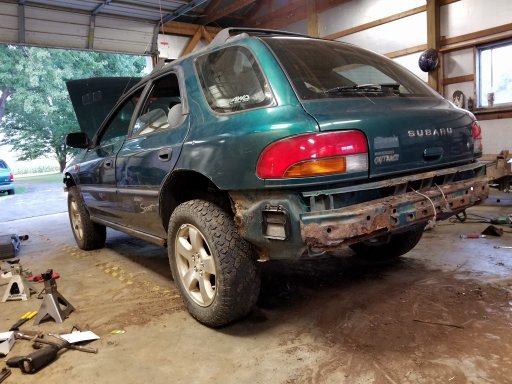 This was all just to prepare to get it roadworthy. I knew I'd still need a front bumper to even be legal, so on to another buddy's shop.
Reactions: Smileyshaun

Seeing how everything was being peacemealed together from trashed subarus, I began calling her trasharoo. Now I know that's a company name, but her name stuck.

Next up was the bumper. Using scrap metal and a hand me down bull bar from an H3 we started to mock it up, then weld 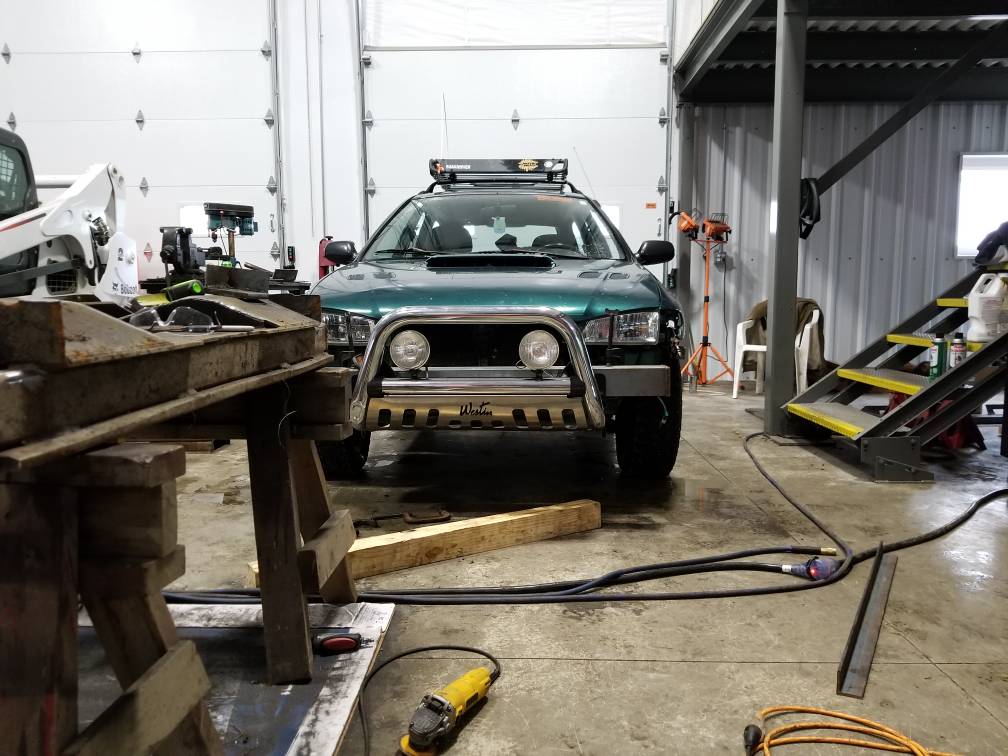 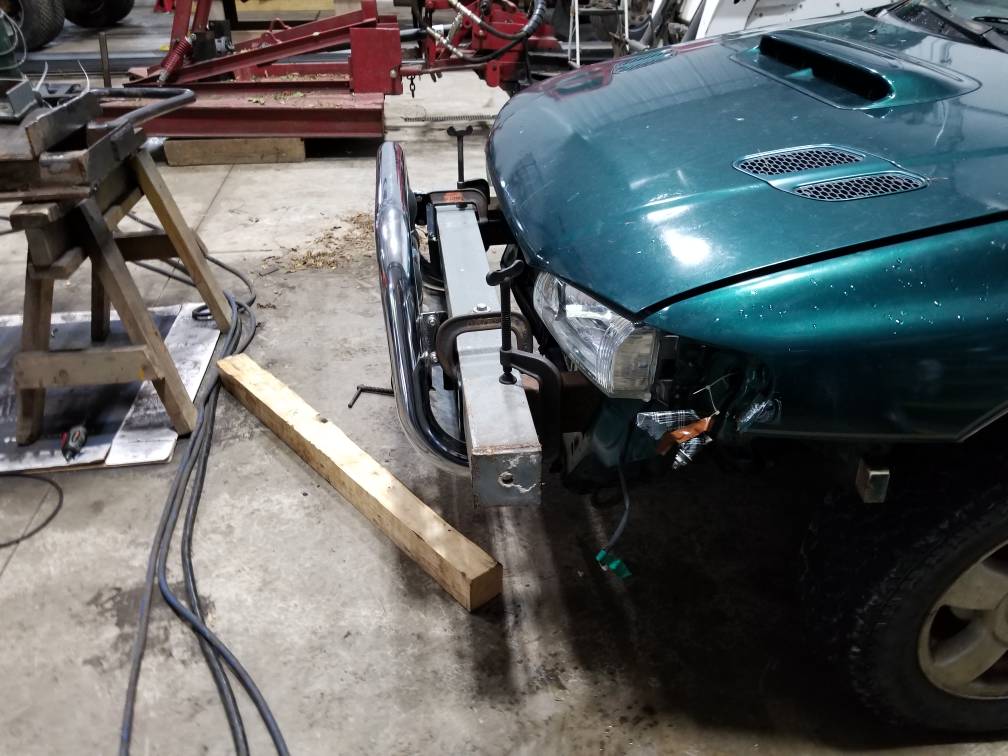 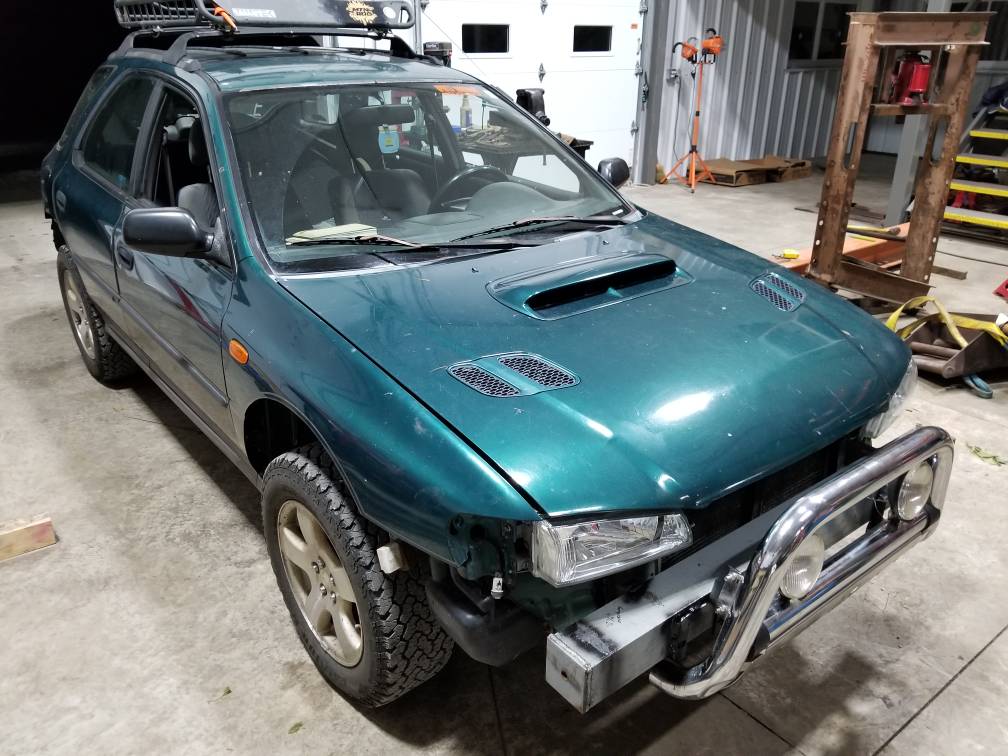 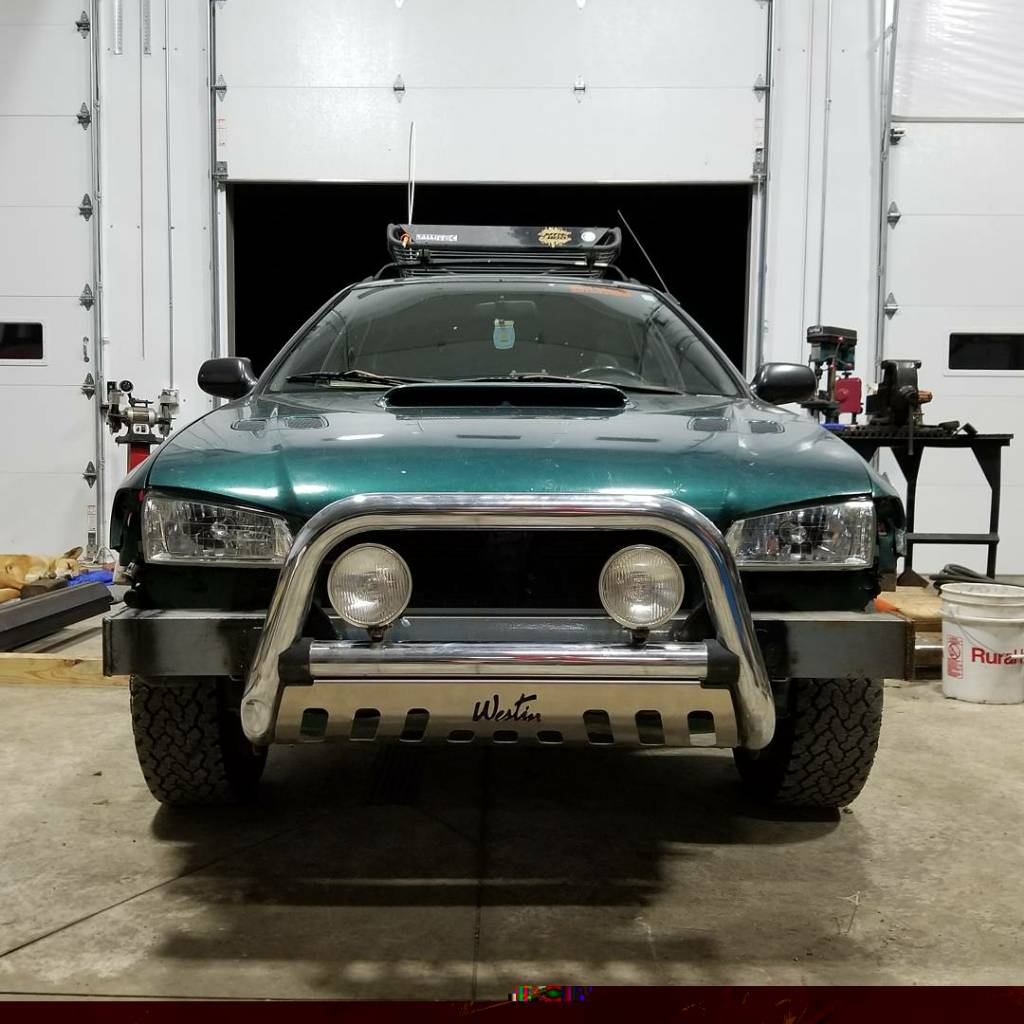 Took her for her first run at Grandpa's Pit. She did well but figired out there were a couple mods needed
Removing the sway bars made me the only subaru at this event to not free hang a tire at the entrance to this trail

I made it up the side of this sand hill 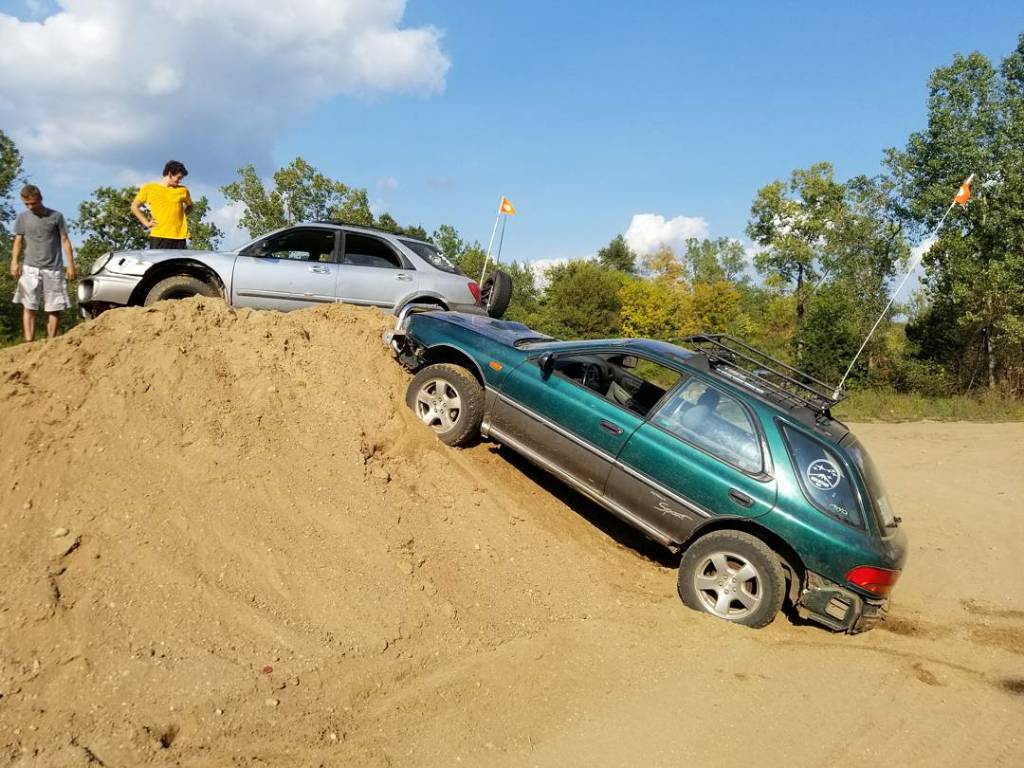 At the expense of it knocking my fog lights back 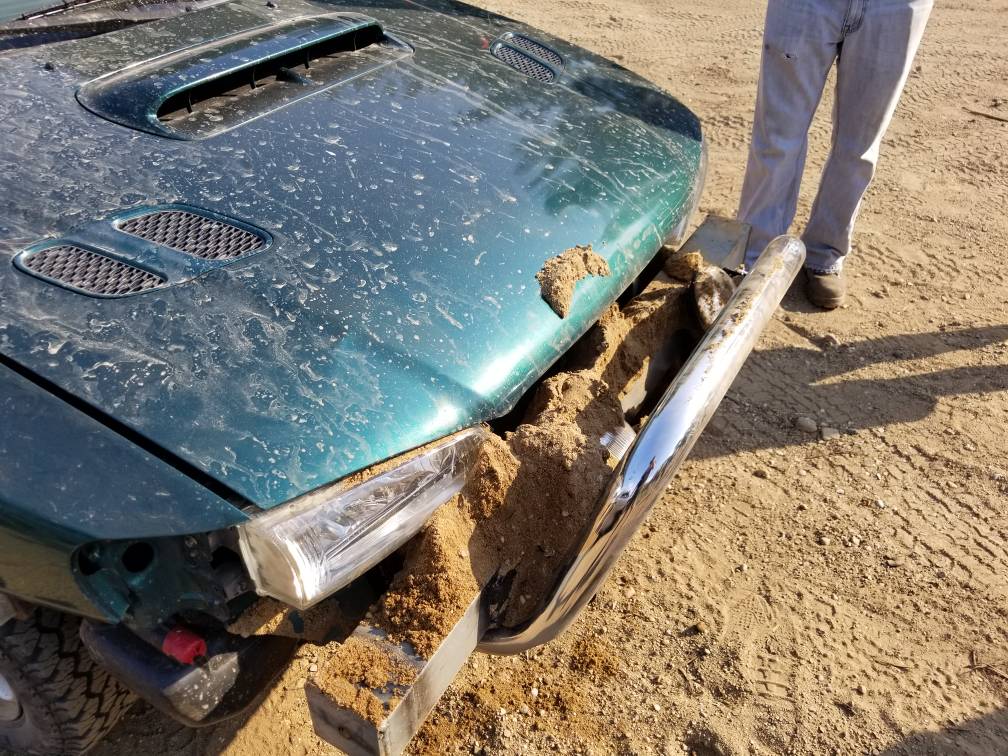 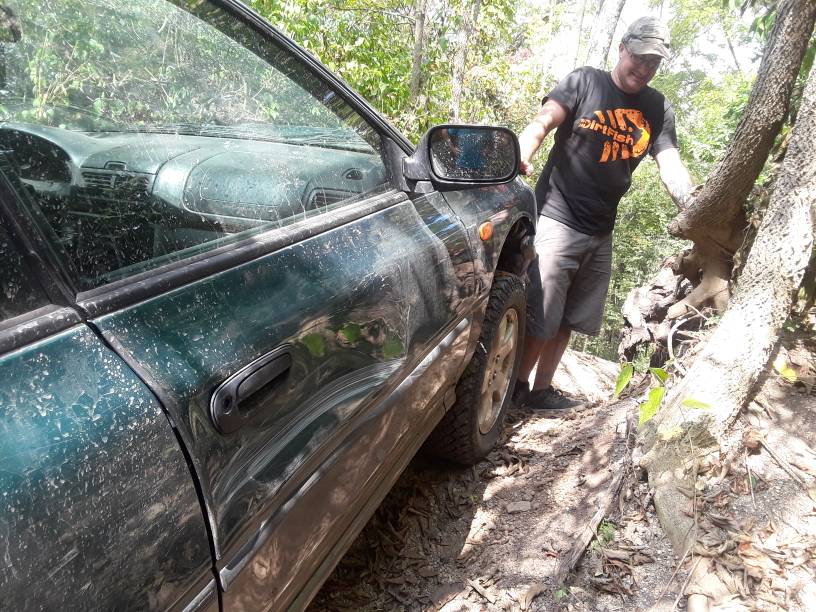 Our group photo there 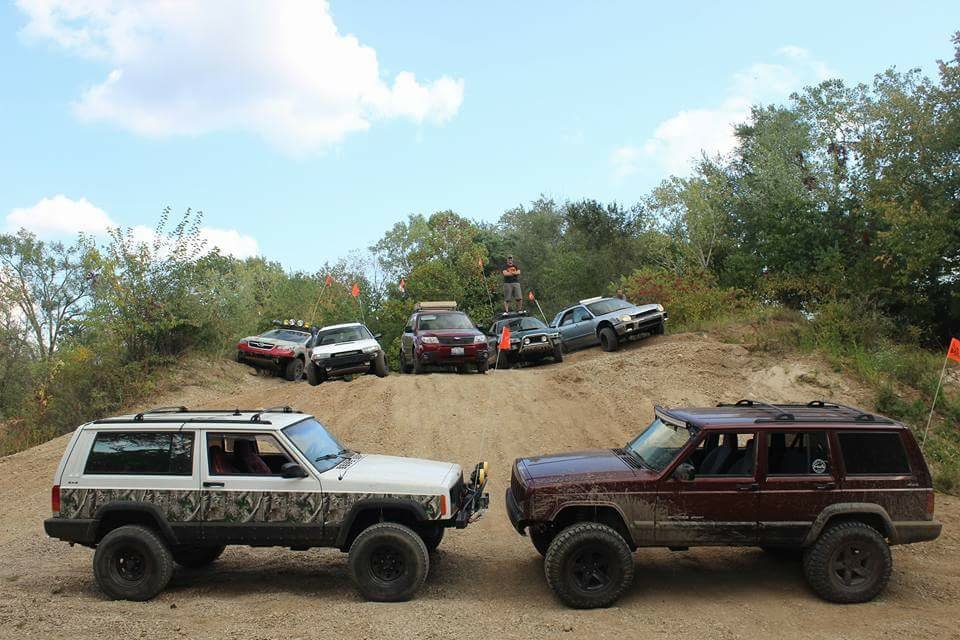 Apparently I can't upload video. They had a good mud hole there but she stammered like hell because I got water in the intake. She rocked every trail though. Got an old cobra CB and fit it in the dash pocket like it was made for it. 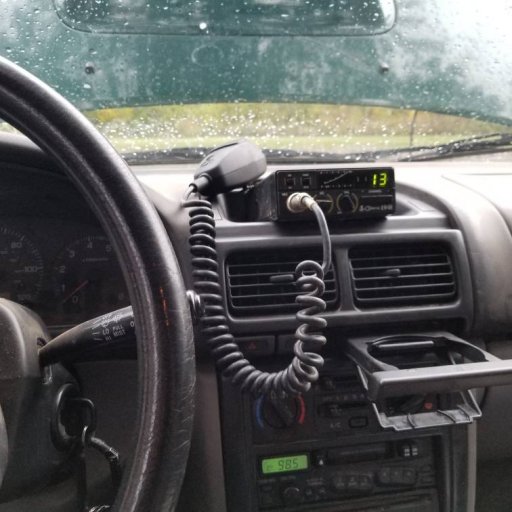 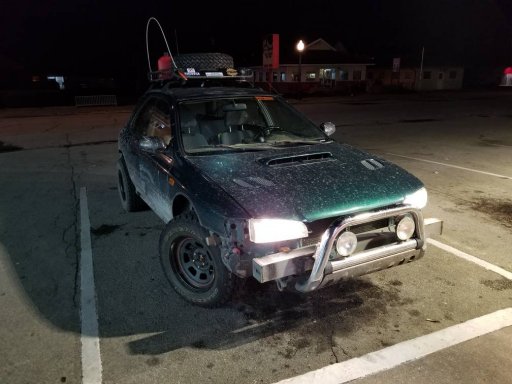 Made it to campsite 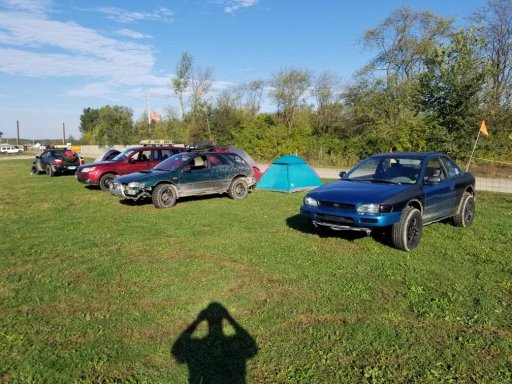 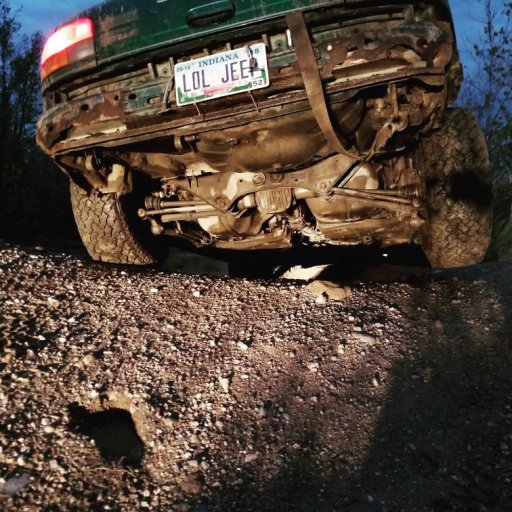 Testing out my new tracking app

Group photo while the storm rolled in 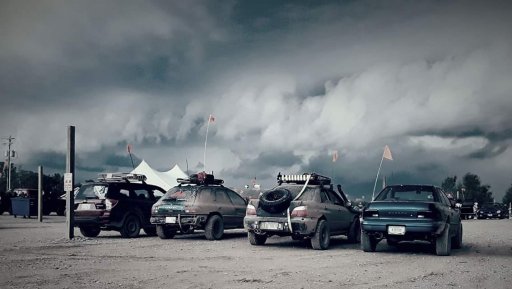 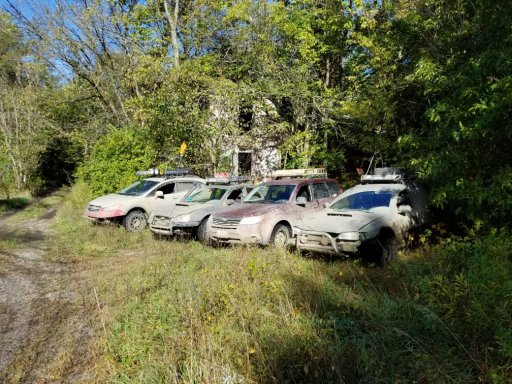 I love the build. There's something special about bringing a car back to life like that. I have a 2010 outback, but older gens have a special place in my heart. i want to lift mine, but I refuse to do just a spacer lift. If I'm gonna do it, I'm gonna do it right. How did you know forester struts and springs would be compatible? I want to do a suspension lift- I assume that was implied- and unfortunately there doesn't seem to be much help in offroad parts for the gen 4 outback.

PS what cargo rack did you use?
Reactions: THEpoorguy

First gen forester struts are a direct fit, but the 2nd gen forester struts have spring perches further away from the knuckle, allowing larger tires. As far as true suspension there really isn't anything available for any of them. I really need to update this, since I've lifted it more, and rolled the car haha. The roof basket was a cheap curt basket.
Reactions: Logan Hall

Rolled it? You really did a lot of work on this rig since the last time I stumble across this thread. Nice to see you got it out to run some trails. Hope to see more up-dates soon!
Reactions: THEpoorguy and Logan Hall

JDGreens said:
Rolled it? You really did a lot of work on this rig since the last time I stumble across this thread. Nice to see you got it out to run some trails. Hope to see more up-dates soon!
Click to expand...

It's obviously been a few since I hopped on the forums. I have a lot of updates, just drove her 2 hrs to Badlands Offroad Park and back for a fun trip last weekend. She just won't give up lol
You must log in or register to reply here.
Share:
Facebook Twitter Reddit Pinterest Tumblr WhatsApp Email Link
Top Bottom