Ever wondered why a bank of batteries connected in parallel seem to fail sooner than expected?

Most of us connect a bank of batteries together in parallel, which is, electrically, the correct way to increase capacity at a given voltage (in most of our cases, 12v). Depending on how the vehicle is set up to be used, one, or more, batteries are used to provide power for a variety of uses. Winching and off grid sustainability being the two most common that overlanders need to consider. Choosing the size and number of batteries depends completely on individual requirements in terms of power usage, but in general, the more, the better, within reason. Weight being the biggest consideration.

However, how many of us have considered that they way we charge these batteries in parallel is the reason one, or more, fail prematurely?

The following aims to help understand how to charge a bank of batteries that are connected in parallel correctly and reduce the failure rate, therefore saving us a few $$ in replacement battery costs.

Unbalanced Charging: It’s all about resistance.

All batteries in the bank are the same (type, age, size). For example, you should not connect a deep cycle battery with a starting battery (I bet most of us do though), or connect an older battery with a new(er) battery.

Figure 1 below depicts how most of us connect a bank of batteries. But, this results in an (electrically) unbalanced system due to uneven resistances in the wiring and connections. 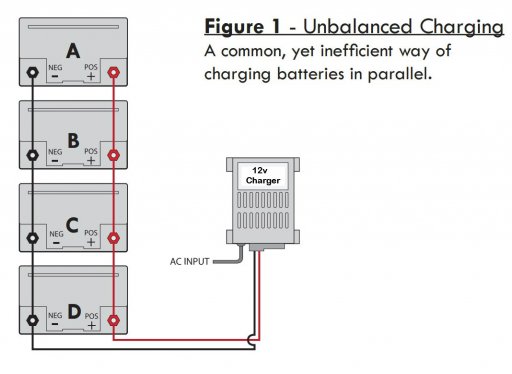 The first battery in this configuration will receive a higher (faster) charge than the others and be worked harder under load than the next one and subsequent batteries.

Theoretically, each battery will charge and discharge at the same rate (i.e. current flow), but this is not the case in reality. Small, but measurable, differences in resistance between each battery connection reduces the current flow through each of those connections as shown in figure 2.

Balanced charging is the way to eliminate these differences by evenly distributing the resistance of the connections across all of the batteries. Doing this allows for balanced charge and discharge, therefore gaining the best life potential from each battery and ensuring they all have a similar, longer, lifespan.

Balanced Charging: The correct method to charge batteries in parallel.

The simplest way of achieving balanced charging is to connect from each end of a bank of batteries. In the example below, each battery will draw current through exactly the same number of connections. This is a far better method than demonstrated in the two examples given in Unbalanced Charging above. While a difference still exists (approx. 15%), it’s much less of a difference than before. However, this is still not perfectly balanced.

This method of charging can be used on both an even and odd number of batteries. 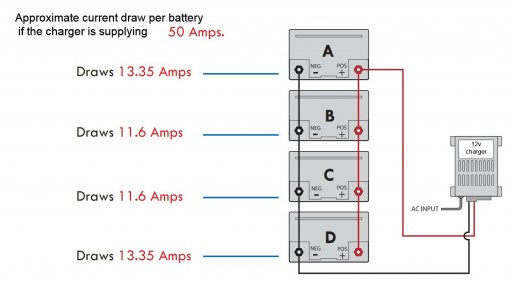 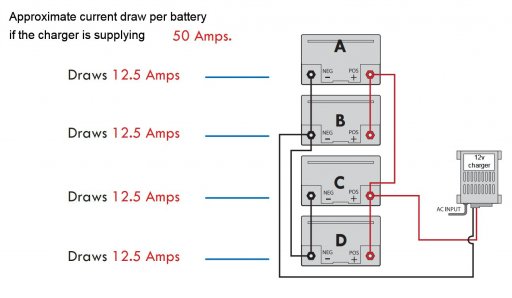 Note, the drawing above is a schematic, making it look like the negative connection from the charger is longer than the positive – this is not the case, they should be the same length.

Likewise, the connections between each battery should also be identical lengths. And to re-state, they should all be the same gauge.

This method of charging will ensure that each battery draws the same amount of current from the charger, therefore maximising the life of each battery because they charge and discharge at the same rate as each other.

This method of charging can be used on an even number of batteries.

An addition to this would be to incorporate a desulphator, would could increase battery life by 2 to 3 times. These work by adding a pulse to the charge. This pulse is driven at a known frequency that breaks up and dissolves sulphate crystals that form on the battery plates.

While the above may be considered overkill and too much down to the last detail in terms of design and installation, by following a few simple rules, the life of your auxiliary batteries will be extended, saving several $$ along the way.

In reality, we will probably break a couple of these “rules” (for example, mixing starting and deep cycle batteries and different lengths of cable between the starting and the first auxiliary battery), but, we could also learn from differences between unbalanced and balanced charging.

It would be worth considering changes in wire gauge (larger) to compensate for longer distances, thereby maintaining similar resistance of each connection. There are tables available from cable and wire manufacturers that will help work out the volt drop, at given voltages, per metre (or foot), but you still need to find out the resistance of the cable or wire you have bought per metre (or foot) before you can figure out the volt drop.

In the world of overlanding, most of us have a split charge between the starting and first auxiliary battery, in which case we’re stuck with what we have, but in some cases, we may keep them separate by using two alternators and in some vehicles, mains (shore or generator or solar) power might be used to stay on top of battery charging while parked up. In any of these cases, the principal of equal resistance of each connection should be considered to ensure maximum battery life.
Reactions: Jedi, Jakes2514, tkt0912 and 4 others

This thread, I missed earlier. Is everyone running on a similar setup?
Reactions: Luis Merlo

It's something I worked on while researching battery to battery charging instead of split charge and realised it explains a lot about why I had been loosing batteries without a real reason when I run 2 sometimes 3 as a bank of auxiliaries.

Just curious if I was running only a 2 battery solar charging setup what would be the proper way to hook them up? Thanks
Reactions: tkt0912

YoteMan said:
Just curious if I was running only a 2 battery solar charging setup what would be the proper way to hook them up? Thanks
Click to expand...

For proper balanced charging connect as above, but replace the charger with the solar controller.
Cable lengths and identical batteries is the key.
As well as correctly sized cables (slightly oversize to avoid volt drops on long runs) and decently made connections.
Reactions: tkt0912, yak51 and YoteMan

This is a great post, @nickburt, with important info if you want to keep batteries balanced and long-lived.

How would this be affected if every batter had its own connection to the charger? Perhaps setup with a power distribution block.

persquank said:
How would this be affected if every batter had its own connection to the charger? Perhaps setup with a power distribution block.
Click to expand...

Interesting idea. However, the principal remains the same, equal lengths of cable required, therefore equal resistance, to maintain a balance. Even if connected individually to a charger, a battery with a shorter charge cable would draw more charge current from the charger and take things out of balance again.
N

hello...when I repaired my battery with a failed BMS I individually charged the cell groups to be within about 1/10 of a volt of one another using an RC car Li-Ion charger using alligator clip leads. You have to be very careful not to short the battery doing this. When I put on the new BMS it was able to handle the difference and balance the cells.
Also realize that cell balancing can be a very slow process when they use low power handling resistors to bleed off the power, and it might only do it on the charger. Might have to leave it hooked up for days or weeks to balance such out of balance cells.

That is exactly how the batteries in my company issued power unit (18 wheeler) were wired up. Balanced charge to identical batteries, 4 batteries for the power unit, and 4 batteries for the bunk. I do not understand when some overland "experts" claim that identical batteries are not necessary for a good system. I wired up my own pair and check their charges often and they both are always up around 12.5 or 12.7 volts. I must be doing something right and you have confirmed that indeed, I am.. Thanks for this write up and the diagrams. :)
Reactions: nickburt

For God and Country

Well I have never seen this and it makes total sense! Thank you for posting this.....

Ok I have a question.
If I build a bank of batteries like in the diagram then I have an isolator between the bank and the vehicle battery. What is better to use. A diode or relay/solenoid?

Why is one better than the other? (Pros/cons)

I found this which explains a lot, I’m trying to understand it all

Fozzy325 said:
Ok I have a question.
If I build a bank of batteries like in the diagram then I have an isolator between the bank and the vehicle battery. What is better to use. A diode or relay/solenoid?

Why is one better than the other? (Pros/cons)

I found this which explains a lot, I’m trying to understand it all

Wow, that's a really detailed (and probably over complicated) post.

To keep it simple and reliable, a voltage sensing relay, is one of the most cost effective ways of doing it. Something like a TMax split charger for example.

But, if you want to maintain the batteries properly and keep them in the best of condition, then a more expensive solution is a conditioning battery to battery charger.

I would always prefer to use a relay/solenoid/isolating switch. It's a sure, mechanical, means of disconnection - which could be very important in an emergency situation. Diodes are good for control purposes, but actual isolation should always be a mechanical disconnection device of some sort - even if it's electrically operated.
Reactions: Desert Runner and Fozzy325
You must log in or register to reply here.
Share:
Facebook Twitter Reddit Pinterest Tumblr WhatsApp Email Link
Top Bottom