I kind of fell into this old 4runner. My daily driver broke down, nothing major, but a family member lent me this 4runner for a few days while my car was fixed. The 4runner had been driven about 200 miles the previous 2 years, most of that in one trip.

After talking and weighing options he decided to sell it to me for $1200. The good is that everything except the windshield washer reservoir works, including new AC and a new clutch. Cruiser control, power everything, and even though she's 25 years old, she feels solid and isn't creaky sounding or loose driving around. 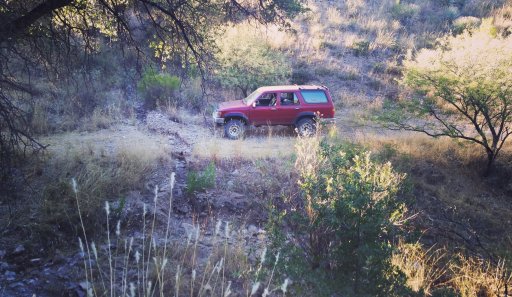 Now she's a typical gutless 2nd gen, and she has blown a head gasket, and she does have some valve train noise. So my first order of business was to clean out the rats nests and fix whatever leaks I could. 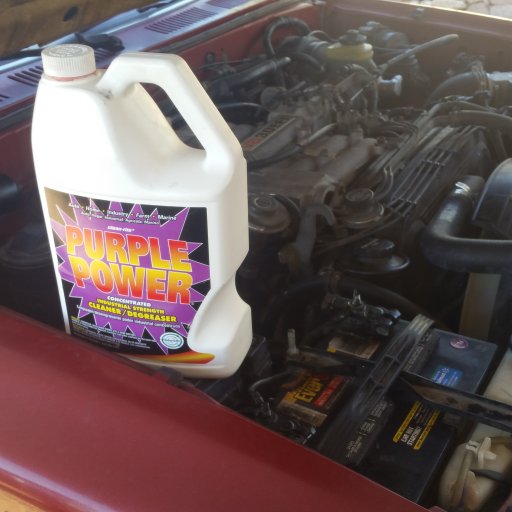 So, valve cover gaskets, and some cleaning ... she still has a small rear main seal leak but that's staying until I have to change the clutch (which shouldn't be soon as it's new).

I've since gone 4 wheeling twice, once was pretty hairy, but she did awesome...better than expected. Here's a short video.
For the next few years my wife and I will use her for short overlanding trips and have already discovered the need for a small roof rack. Once we get the dogs loaded up with our gear, we are packed! So I added a rack last night. 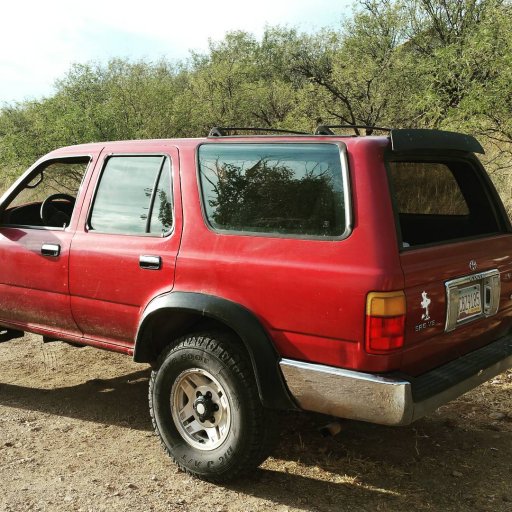 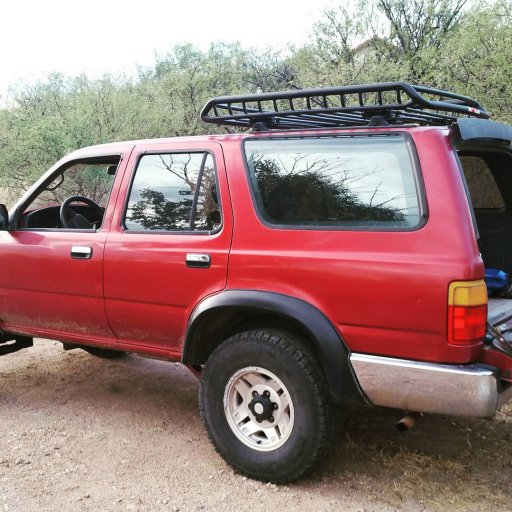 The plan is simple...small mods that fit our needs. I'll put an OME lift on her, and some 33 x 10.5s soon. Then some gears to help with the gutlessness, along with a rear aussie locker.

I'd really like to add some lights and decent bumpers, probably some rock sliders too. But, dreams and budgets, right??? ... they rarely align.

See, I should call her 4play...I love exploring and camping, but my wife doesn't like the idea of pooping outside, so before I can invest in a modern rig, I need to see if she's really on board!

I think I'll win her over as she loves fishing anD hiking anyway and we will go cool places.

If and when I get a more modern rig, I'll do a SAS and make this 4runner a serious offroad machine. (She looks good, but has some rust and has been in a fender bender, which makes me comfortable chopping her up a bit in the future).

Old vehicles...the water pump crapped out, so I'll be tackling a water pump and timing belt swap this coming week. 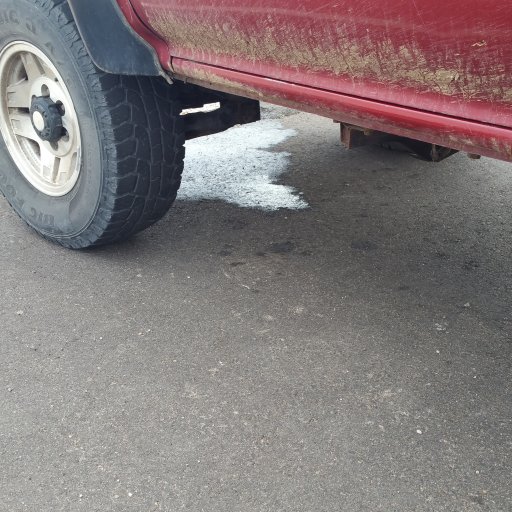 Looks like a good base, looking forward to watching the build. 2nd gen 4runners unite!

As is often the case with newly acquired older vehicles, I put a lot of time in repairs this past weekend. I've never done a timing belt in my life, but YouTube bolstered my adventurous nature.

What I found was amazing. The belt was .. I'll let the pics show you. 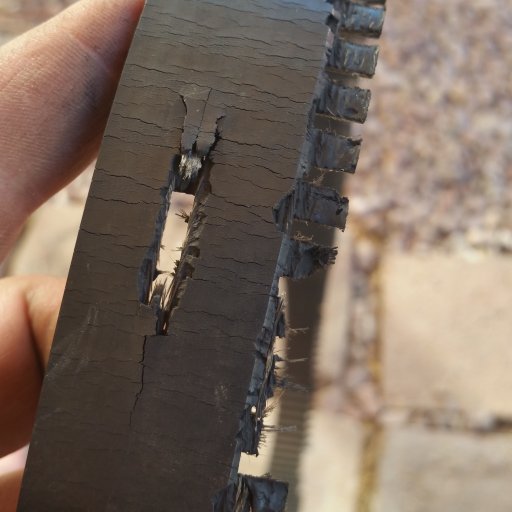 How this never snapped is beyond me! 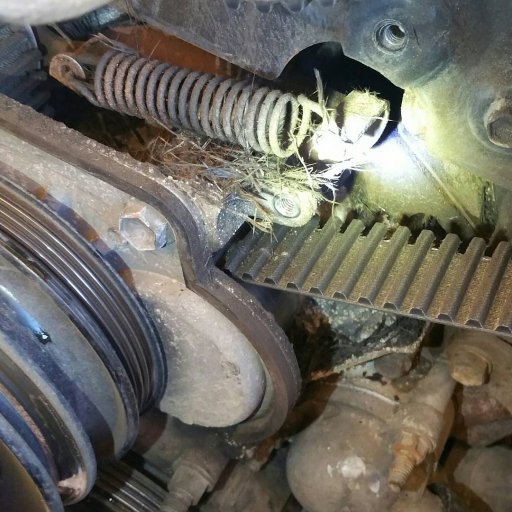 And the shop where the my uncle had taken this for repair "fixed" the overheating problem by cutting out the center of the thermostat. 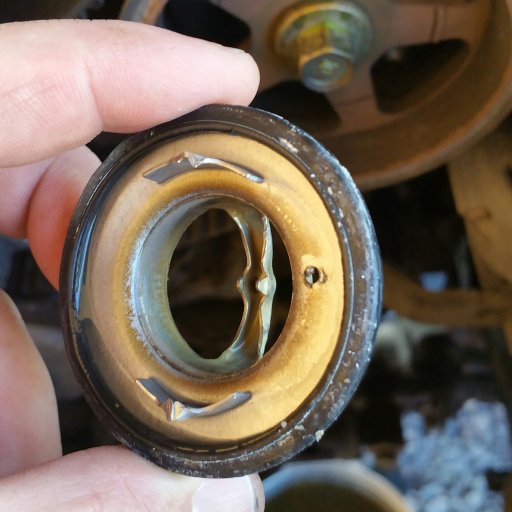 Anyhow, I did manage to get the new belt on it, as well as replace the waterpump, thermostat, idler and tensioner pulleys. Hopefully nothing is unwittingly messed up due to my monkeying around under the hood.

I hope to get some off road exploring done this coming (Thanksgiving), weekend.

The mechanical side is less than glamorous, compared to lifts, new tires and bumpers and such. But, it's gotta be done!
Reactions: O.B.A.K and Jimmy P

Looks good for the price!

I really miss mine , if you keep the tires and wheels light , full synthetic fluids in everything down to the ujoints and put on a good 2” minimally bent exhaust ( I used a dynomax vt, no drone on the freeway ) it should have plenty of power for what it is . I never had problems with hills even loaded with 4 people 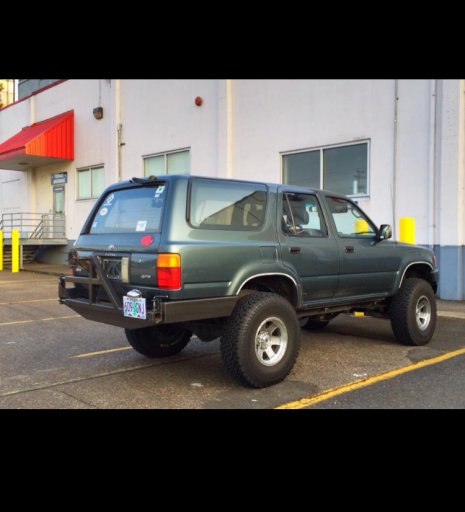 Sorry I diddnt look to well , it’s a 3.0 . Go with 2 1/4 Exhaust same muffler , but do get a set of headers for it or have the crossover pipe redone . One of the biggest reasons for the 3.0 blowing head gaskets is because the crossover tube sit so close to the head that I actually boils the head gaskets into failure .

Smileyshaun said:
Sorry I diddnt look to well , it’s a 3.0 . Go with 2 1/4 Exhaust same muffler , but do get a set of headers for it or have the crossover pipe redone . One of the biggest reasons for the 3.0 blowing head gaskets is because the crossover tube sit so close to the head that I actually boils the head gaskets into failure .
Click to expand...

I have never heard this until now.... strange. Maybe a 3.4 crossover pipe would remedy that? If it could be made to fit? Idk how much headers for the 3.0 are.

Not sure how much they are , did one on a buddies truck and he drove it for another 6 years before he rolled it and drained all the oil out and blew the motor . It helped a lot to wake up the motor to

On mine I just did a 2” body lift and it fit the 33x10.50s with no issues . I mainly did a body lift because I wanted to keep the smooth factory ride and I moved the drivetrain up 2” so I could build a belly pan skid plate for it .
O

I have 1.5" spacer on mine (33x10.5), PO grenaded motor, but it was full of crud so it was a wonder it was running anyway. The main thing I am doing for HG is resurfacing heads + new head bolts with a new HG, and wrapping cross-over pipe with heat wrap because I didn't want to pull the trigger on spendy exhaust stuff. Trying to keep it simple and cheap, although I did spend money on EGR delete/Cat delete and also deleted AC/Cruise as well as deleted the oil cooler in exchange for a two filter set-up with all synthetic throughout. 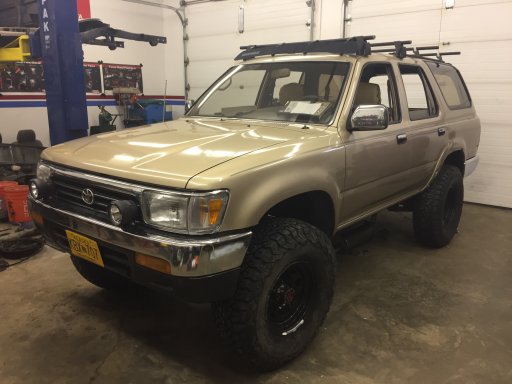 I love the 2nd gen 'Runners, but that 3.slow motor gives it a bad taste.

I'm always on the lookout for the somewhat rare 2 door version, I want to do the Cummins 2.8 diesel swap. That would be a fun and unique rig!

this is my 3rd 2nd gen 4runner, i just have always loved them even with the flaws. This time with my 3rd 2nd gen 4runner i have done something different and unique and have done all the work myself, i have taken out the 3.slow and swapped in a 1uzfe from the lexus ls400. on top of that i mated the r150f manual transmission behind it and lifted the 4runner a total of 8" (considering on dropping down some) and added much stiffer swaybars to help with body roll. still a work in progress but i love it. 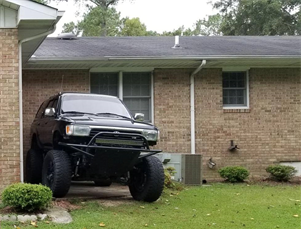 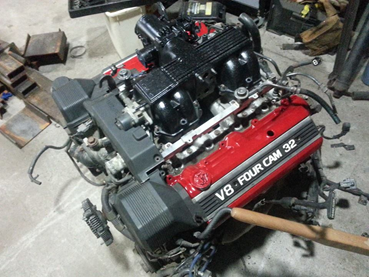 I've since scrapped it but I like the 2nd gens almost as much as the 1st gens. 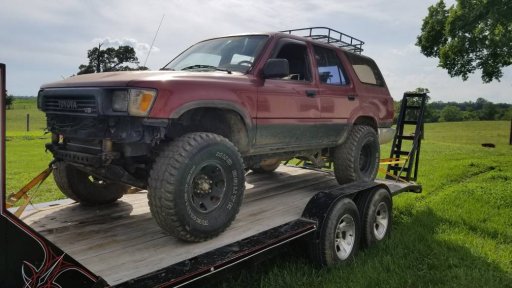