I recently bought the Wilco Offroad Solo high clearance tire carrier. Needs some adjusting to get it to sit closer to the ML, but its a lot more solid than my previous self built one (which starting falling apart with the heavier spare tire).

Edit to reupload pictures, the original ones uploaded with very poor quality. 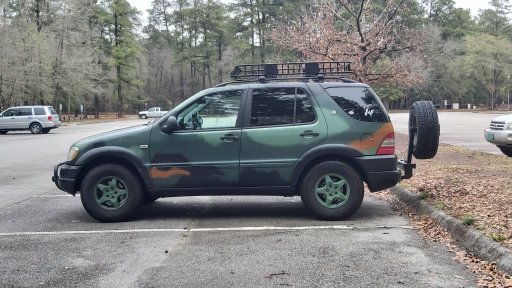 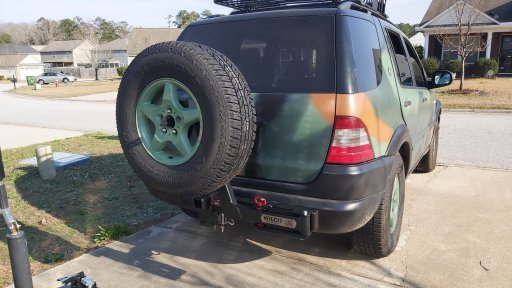 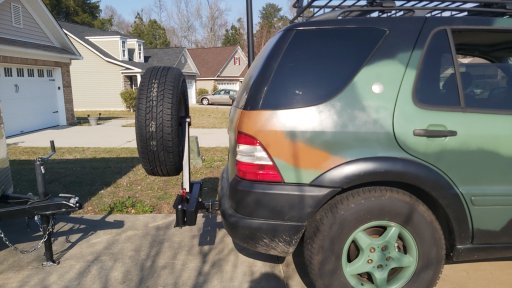 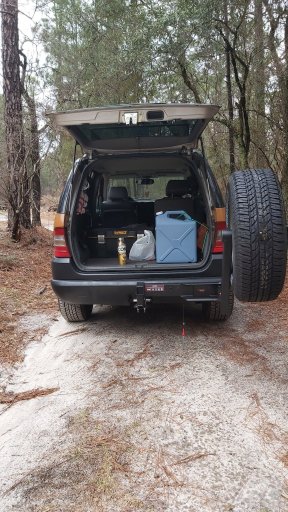 Last week I went to Old NC105 and got some footage of the ML driving:

Went on another short trip and got some more footage of the ML in action!

Why do you suppose the tire swing sits too far from the rear of truck? Do you think that particular tow hitch sticks out further than others? What brand tow hitch are you using? I'm asking because I expect to encounter similar problems in my future and just want to have a plan.

sonofabenz said:
Why do you suppose the tire swing sits too far from the rear of truck? Do you think that particular tow hitch sticks out further than others? What brand tow hitch are you using? I'm asking because I expect to encounter similar problems in my future and just want to have a plan.
Click to expand...

I'm using the Mercedes OEM hitch receiver that I found on Ebay. When I put the Wilco carrier into the receiver, it was hitting the frame of the ML. The hitch overlaps about 1/4th of an inch or so over the bottom of the frame, which is why the carrier couldn't slide back any farther. I ended up grinding enough off of the back of the Wilco carrier so I could move it farther back and be able to use the 2nd pin hole. I don't think there is any adjustment room with lowering the hitch receiver as I remember it being pretty tight going on.
Reactions: sonofabenz

I'm in Idaho now! I took a seasonal park ranger position with the Bureau of Land Management and have been here for just over a month now. The ML320 did fantastic on the trip out here towing a cargo trailer, and the only thing that worried me was that my rear springs are too soft (which I knew long before this trip) which when towing the trailer even without my tire carrier made the ML squat way too much in the rear. Hopefully I'll get those replaced this summer if I can scrape up enough money for it...My old mechanic did me a solid by finding a reputable Mercedes mechanic here in Idaho so at least I have a shop I can take it to for the work.

I'm also in the process of finishing said trailer to be a RV conversion. Interior is maybe...70% complete, and I've started painting the outside to match the ML! The interior still needs a floor, sink, shower pan, folding bed, computer desk, at least 2 more windows, and some minor cosmetic additions.

As mentioned before, the tongue weight is WAY too high for how light the trailer is. It's about 300lbs and the trailer itself probably weighs around 1500-1700lbs (purchase weight was 1250lbs). Part of that is because we installed cabinets and a custom countertop in the nose section but didn't add any weight (other than my belongings) to the rear. That'll be fixed as I add more things to the rear and whenever I add solar batteries.

I already have a hotspot that I'm using right now (the station I'm staying at has poor wifi for what I need), so all I need is power and a less power hungry computer and I'll be good to go in the trailer when the season ends sometime in the fall! 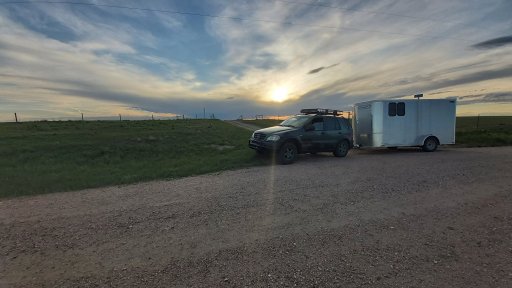 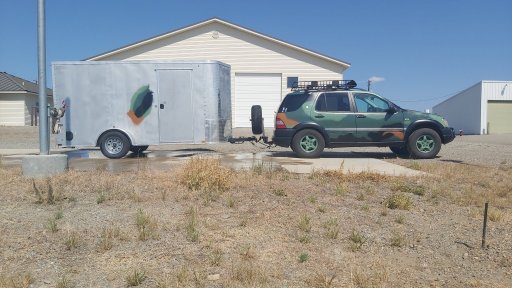 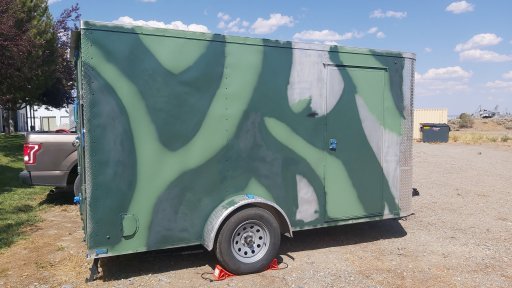 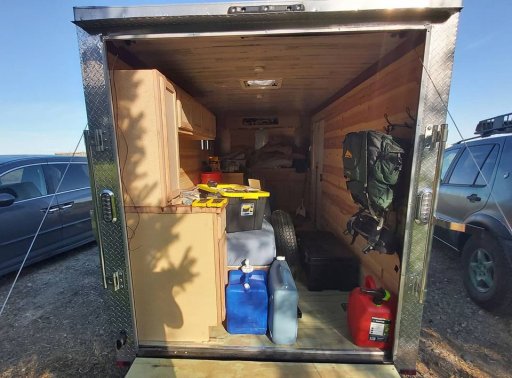 That's a LOT of rear squat. And it also looks like the hitch is too high on the ML, which helps the trailer push down the ML even more. I would consider relocating the spare (maybe throw it in the back of the trailer) when towing...

kostkafex said:
That's a LOT of rear squat. And it also looks like the hitch is too high on the ML, which helps the trailer push down the ML even more. I would consider relocating the spare (maybe throw it in the back of the trailer) when towing...
Click to expand...

Yeah, on my trip out here I did have the spare and the carrier in the trailer and it was still squatting a lot. I'm planning on getting a new receiver that has the ball lower so the trailer is more level as well, but that'll be after I get the rear lifted so I know how large of one to get.

Here's a picture of the ML towing it without the carrier:
Reuploaded from my computer since I forgot the app uploads a tiny version of pictures for some reason... 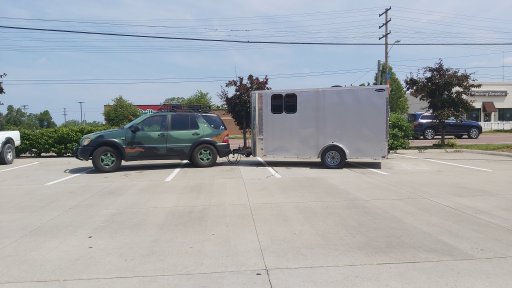 Last weekend I went to a local (well, 2.5 hours away one way...) junkyard and pulled a set of rear coilover springs from a 2005 ML320. I ended up buying an impact gun to get them off...I should have bought one ages ago. Originally I was thinking about taking the coilovers to a shop with a new set of King Springs and Bilstein shocks and have them put the new pair together for me, and then I install them on the ML.

Although, after looking at my finances some more, I think I'm going to use spacers I already have until I can afford the new springs and shocks. For the new springs and shocks will be around $1,000, and I kinda need that money to finish outfitting the trailer before my season ends. Thankfully the junkyard springs look in better condition than my current springs, and I just need to swap out the top bolts with some longer ones to fit the spacers on top. I'm still planning on taking them to a shop to take the springs apart so I can safely change out the bolts. 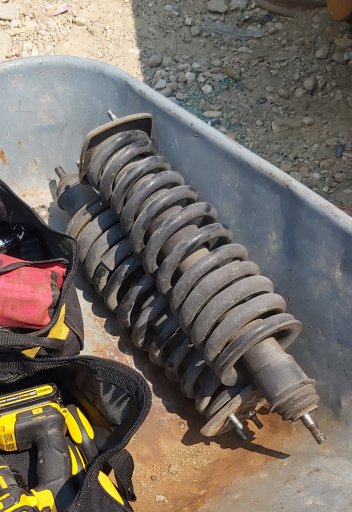 I've had my 99 ML320 in some pretty crazy off road places lately and it never ceases to amaze me and my buddies. Very VERY capable rig for the money, open diffs, and full independent suspension.

I just got my hummer H2 Bilstein 5100s on and love it. Hilarious how they fit in perfect but they have an additional 3" of travel 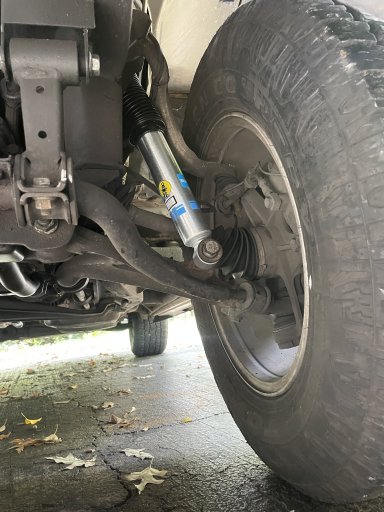 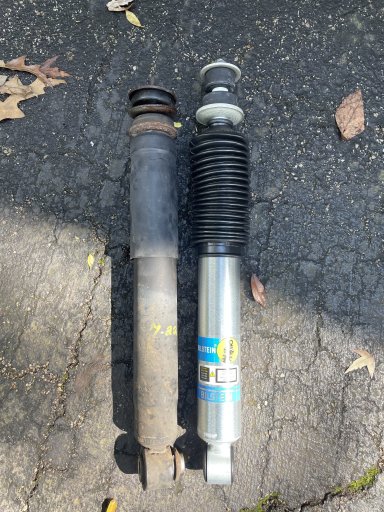 jvluntzel said:
I just got my hummer H2 Bilstein 5100s on and love it. Hilarious how they fit in perfect but they have an additional 3" of travel

Nice! I would like to get some long travel shocks on the front eventually. Good to know what's out there!.

18163.175 said:
I've had my 99 ML320 in some pretty crazy off road places lately and it never ceases to amaze me and my buddies. Very VERY capable rig for the money, open diffs, and full independent suspension.
Click to expand...

Wow! That looks like a major lift on it! Looks awesome!

Its been awhile since I updated the status of the build, but I got the new coilovers with lift spacers installed!

The whole process took some management, lots of time, and knowing someone who could weld. But it was well worth it as I gained about 1.5-2 inches in the rear! Plus there's only about an inch of sag when towing the trailer. Before, it basically bottomed out the springs. I could look over the roof of the ML, and that was with taller tires. Now when it squats there is still plenty of play in the springs.

JasKolp said:
Hey guys! I wanted to get a thread started for my build of my Merc, and go in more detail of what all I want to do to it.

I have a 1999 Mercedes-Benz ML320 with 106k miles on it. Its in pretty good condition for its age, with the usual wear on it and some very minor body damage (a few dents here and there), and so far the only repairs I've done on it have been maintenance items.

It has a small bull bar on it with the fog lights attached, and some steps that are in poor condition. I'll be removing them at some point. Other than that, the vehicle is standard.

Why did I choose a ML320? Two main reasons; it would be capable enough to take me where I want to go, and I want to build a replica of one of the ML's from The Lost World of Jurassic Park. I could only afford to do one, so I figured I'd hit two birds with one stone.

In July I had to get new tires. I went with Yokohama Geolander A/T with the stock tire size, since I wanted an A/T tires but couldn't afford the taller tires. I also got the brakes checked out, and it turned out the Merc needed 4 new rotors, 2 new calipers, and brake pads all around. As I was testing the new brakes out, one of the low pressure power steering hoses broke, and that had to be fixed. All of this before a trip to Tennessee I was taking with my family (picture of the Merc next to the tent)

Oh, and I had to literally cut out the spare tire carrier because the previous owner backed into something and bent the latch so I couldn't get it back in. I had been thinking about using that space for a either a spare fuel tank or a water tank, so I at least know how much room I have to work with now.


Alright, with that out of the way, I'll tell you guys about the latest work I've done to it.

Last weekend I had some help from one of my friends and we got started on some storage systems for the Merc. The plan is for two separate units, one in the cargo area, and one where the driver rear seat is. We built the rear cargo cabinet, but it still needs to have a support wall in the middle, stained, and I need to find plastic bins that will fit in the top shelf. This unit will be camping and general gear storage. Cooking supplies, tent, sleeping bag, ect, will be organized and stored for easy access.

The front unit (that will go in the seat area) I'm planning on being tool storage. It'll have wrenches, hammers, rope, winch gear (when I get the winch installed), and it will be as tall as the rear storage so the two can act as a sleeping platform!

I have an ambitious project, and I'm excited for the work I'll be doing on it in the next year or two. There is PLENTY to do, between the overlanding items, the movie conversion items, and making sure everything overlaps nicely. All of the movie modifications will need to have practical applications on the trail. Thankfully, most of them seem to be adding armor to the ML, so the projects overlap in most regards.

Thanks for reading and I'll be back for more updates soon!