Hi, my name is Steve, and I live about 25 miles west of Cleveland, Ohio, USA.

I found this forum on Instagram.  I think it was tagged on one of finlayforprez's posts (I'm morrisgarage on Instagram.)

We retired early four years ago, one daughter is getting married in August, and the other going off to college in September. Our plans are to get out and explore! We've car-camped for years, both before kids and with them when they were young. But they eventually grew out of it, so we haven't for several years. We've always tried to go on vacations where and when people weren't. Sure, we'd go to Great Smokey Mountain NP or Acadia NP, but do our darndest to avoid the crowds. We hated camping in RV campgrounds, opting instead for primitive or remote state parks. Really no opportunity in this part of the country to just find a back road, pull off, and set up on the roadside. That's where I envy you folks out in the western US. Around here, backroads are any that don't go due north/south or due east/west. The only gravel roads I know of in the entire northern half of Ohio are dead straight roads through Amish country, and you're avoiding cow patties on those.

Unlike most of you, my "rig" is nothing more than my daily driver. I have a 2008 Subaru Outback 2.5 XT Limited 5MT. That's a 2.5 liter turbocharged 4 cylinder with a 5-speed manual transmission. Unlike our Subie friends down under, we don't get the two-speed transfer case in the US. You may be surprised to find that the stock Outback has 8.7" of ground clearance. That might not sound like much to those with lifted rigs, but it is more than a stock Jeep Cherokee or Grand Cherokee, and most other similar vehicles.

Currently my Outback is pretty much stock. I do have the roof rails loaded with some accessories. Once configuration is Thule crossbars with two bicycle mounts, and two kayak racks. The other configuration is a Yakima LoadWarrior heavy duty basket with an 18" extension, for an overall length of 62". I have an ARB 2500 Awning that will mount on either configuration. It isn't as high as an awning mounted from a Land Rover as you usually see, but it will provide plenty of shade after a bike ride, a paddle, or along the road somewhere while traveling.

Plans are to add a light bar and skid plate for those forest and gravel roads we expect to travel on out west. A 1" lift will be accomplished my adding spacers on top of all four struts. Not a lot, but the most without effecting suspension geometry and adding potential reliability problems. I'll also be replacing the nearly worn stock 215-55-17 all-season tires with some 215-65-16 Yokohama Geolander A/T-S tires, which will gain me another 1/2" of ground clearance.

I've got plenty of camping gear, water jugs, four steel 20-liter Jerry cans, etc. to load up for extended traveling. With this setup, I'm sure I can travel the highway comfortably, and drive on 90% of the gravel and forest roads to take us as far off the beaten path as we need to go to get away from folks.

That's probably enough for now. Along with this introduction, I'll use this thread for any upgrades I make along the way.

I'm going to order one of those spiffy badges you guys came up with. Those are really nice! Michael, can I reserve #202, or should I request that in the request thread?

I'm glad I found y'all!
Steve 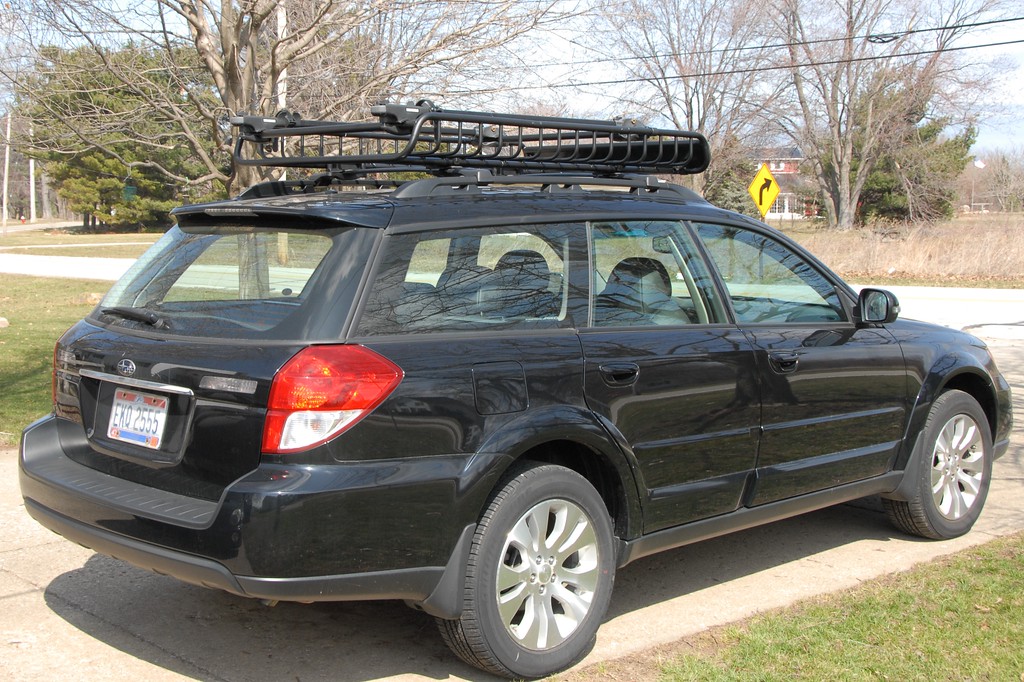 Reactions: SAC and NW David
I

Hi Steve. Welcome the site. Great group of people we have here. that is very nice introduction. Congrats early retirement. looking forward to see you rig mods updates. Those OB badges are great!! look around the site for different forums. and don't forget to get visit the OB store :-O

@Steve Welcome! I always loved those subie wagons like yours. Absolute cockroaches and I've seen huge tire'd monster rigs stuck in snowy ditches and cars like yours fly on by as if they were on dry pavement. And you're right, an OB badge would look awesome on your black car! Can't wait to see where you go...
Reactions: NW David

Thanks for the welcome, guys!

I need to wait for Michael to read this and see if I can get badge #202 before I place an order. (or maybe I should write directly to him.)

There is a show on The Smithsonian Channel called Aerial America. It is an hour show flying over a particular state, describing an area's geology or history. Many of these are well off the beaten path instead of the usual tourist areas. I have 50+ of these bookmarked so far with several more states to watch. I plan on putting these on a saved Google map to access during our travels. The more remote, the more interesting to me!

The early retirement was because we didn't fall into the trap many people do. I've *never* carried a credit card balance for more than a month. I pay cash for a car, or take out a loan and pay it off as soon as possible. We bought one house, the cheapest we could find in a rapidly growing Cleveland ex-urb and paid it off in 11 years, and then stashed as much as possible away for the next 20 years. I was 56 when I retired and my wife was 54. I was just a draftsman at a manufacturing facility and my wife an optician, so we didn't make a ton of money. Our best ever combined income was what a lot of 20-somethings make right out of college. So if you really want to do it and plan far ahead, it is possible.

I have some additional plans for the interior, but those will probably wait until next spring. I still use the back seat until we take daughter to Seattle in the fall, and then visiting family next Christmas I'll end up taking my Mom places. I want to completely remove the rear seat and build a box to fit in its place, at the same height as the rest of the cargo area, with a couple of doors in the top. Then I'll make a new floor fitted to the cargo area with brackets for boxes, fridge, air compressor, etc. I can then easily take that entire new floor out and use the Outback as a station wagon again. I like having multiple configuration options.

Mrs draws the line at adding a ladder on the back of the Outback. It isn't that tall!

Way down the road, I'd like to build up a utility trailer for the stuff in the back of the Outback, my generator, LP tank, and with the bikes and kayaks on top of it. Easier to lift up there than the top of the Outback once I get a bit older.

We'll see how much of my planning comes to fruition...
Steve 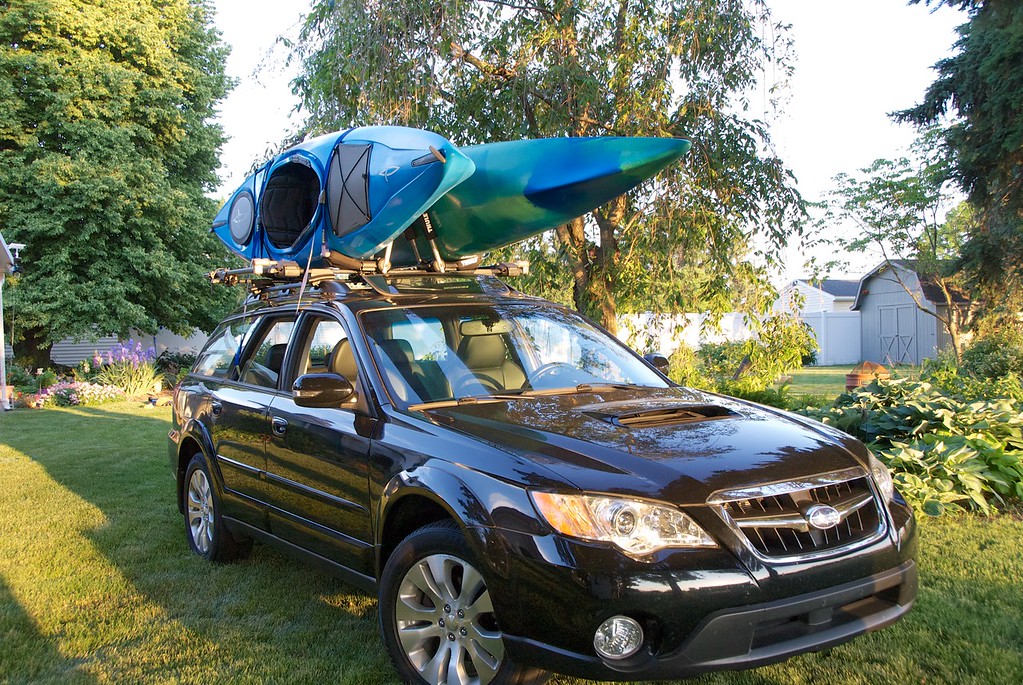 Love the 'Yaks up top

Yours, too! We were looking at used LR4s, and I wondered how hard it would be to get them up there and then strap them down, especially with one person. Decided the Outback I already had was up to doing almost everything I'd use the LR for, and it gets better MPG and is already paid for.

Hi Steve, and welcome to the site! I love the Subaru, and already know, yes they are quite capable rigs! It will be fun to see what you do with it! I'm glad I caught up with you, and I have reserved #202 for you. Just remember to make a note in the comments field when you order so I send the right emblem!

Glad to have you on-board! @david_west AKA finlayforpres is a long-time OB member and friend. Keep us posted on your progress and cheers to many adventures! 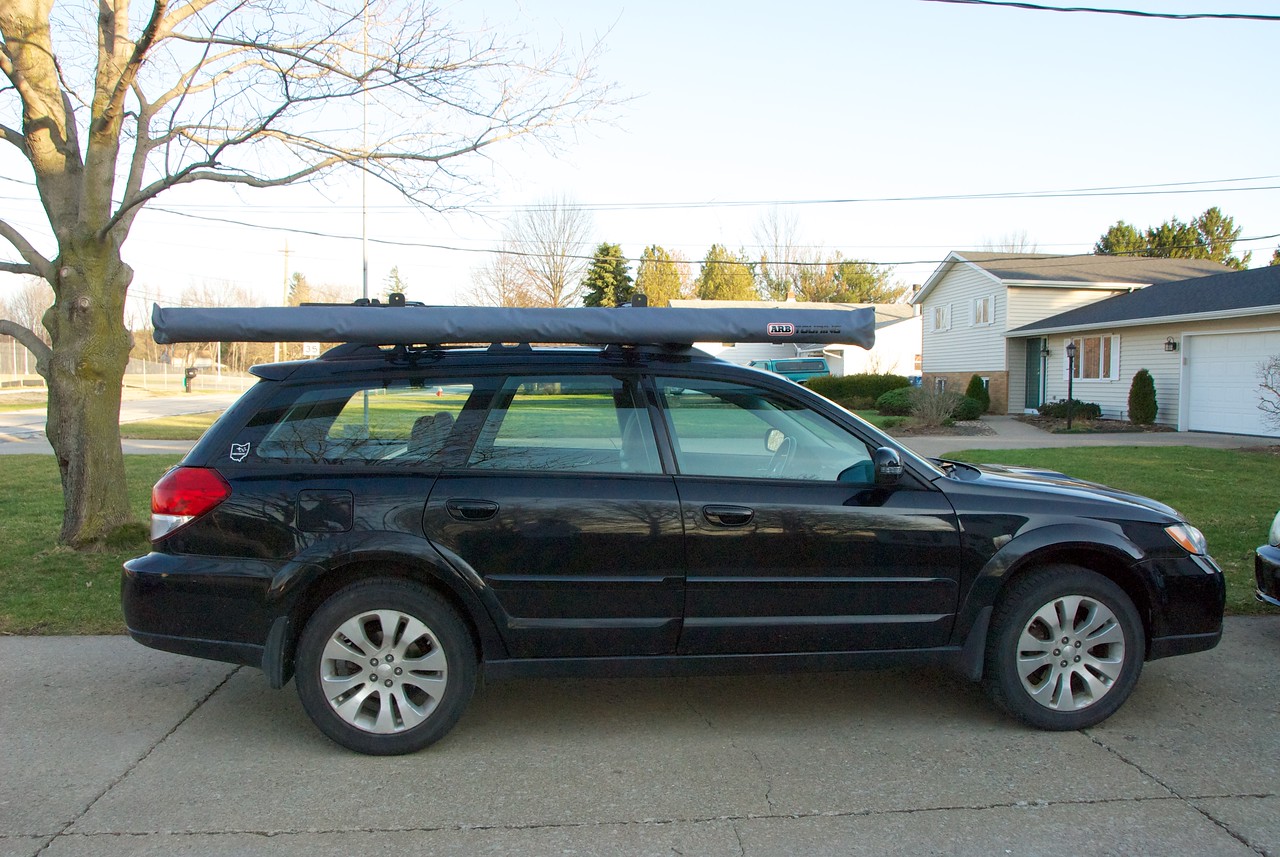 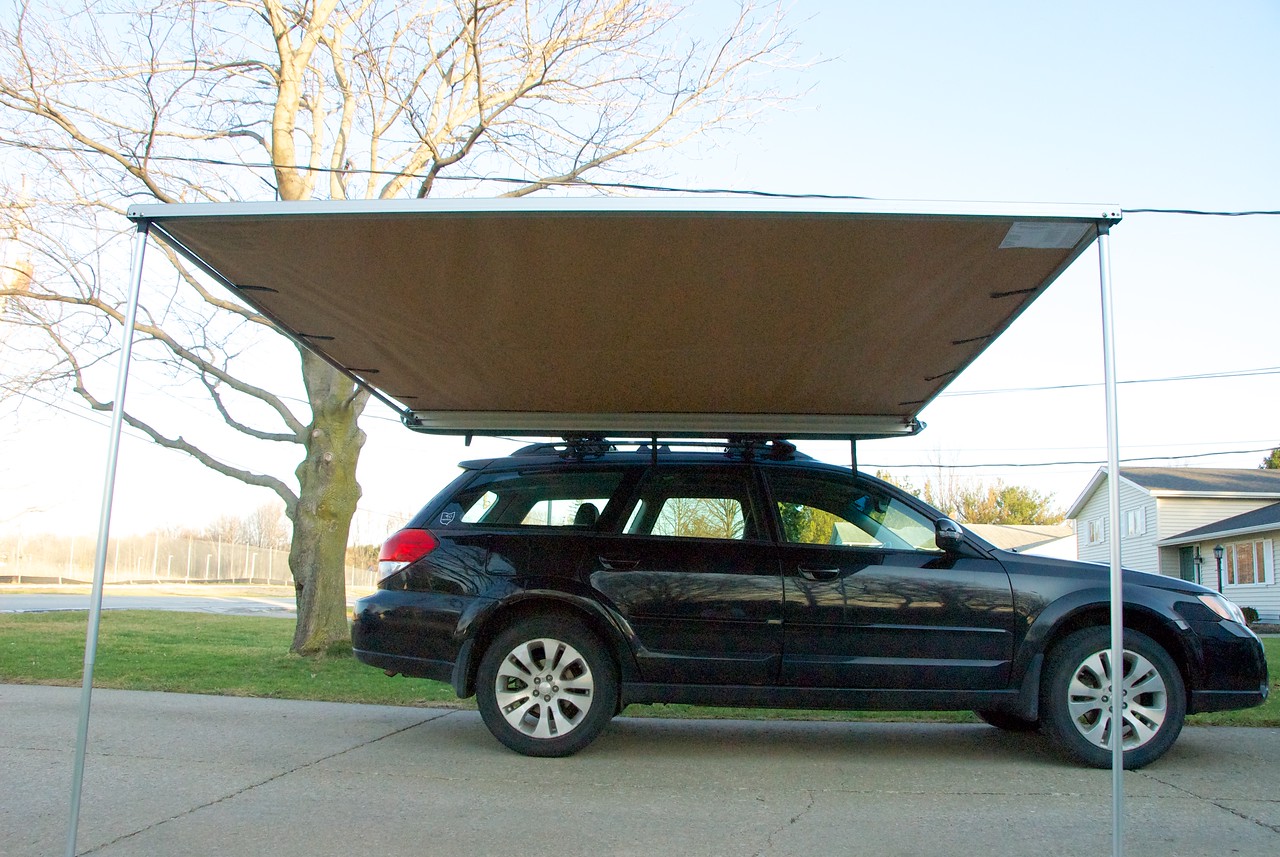 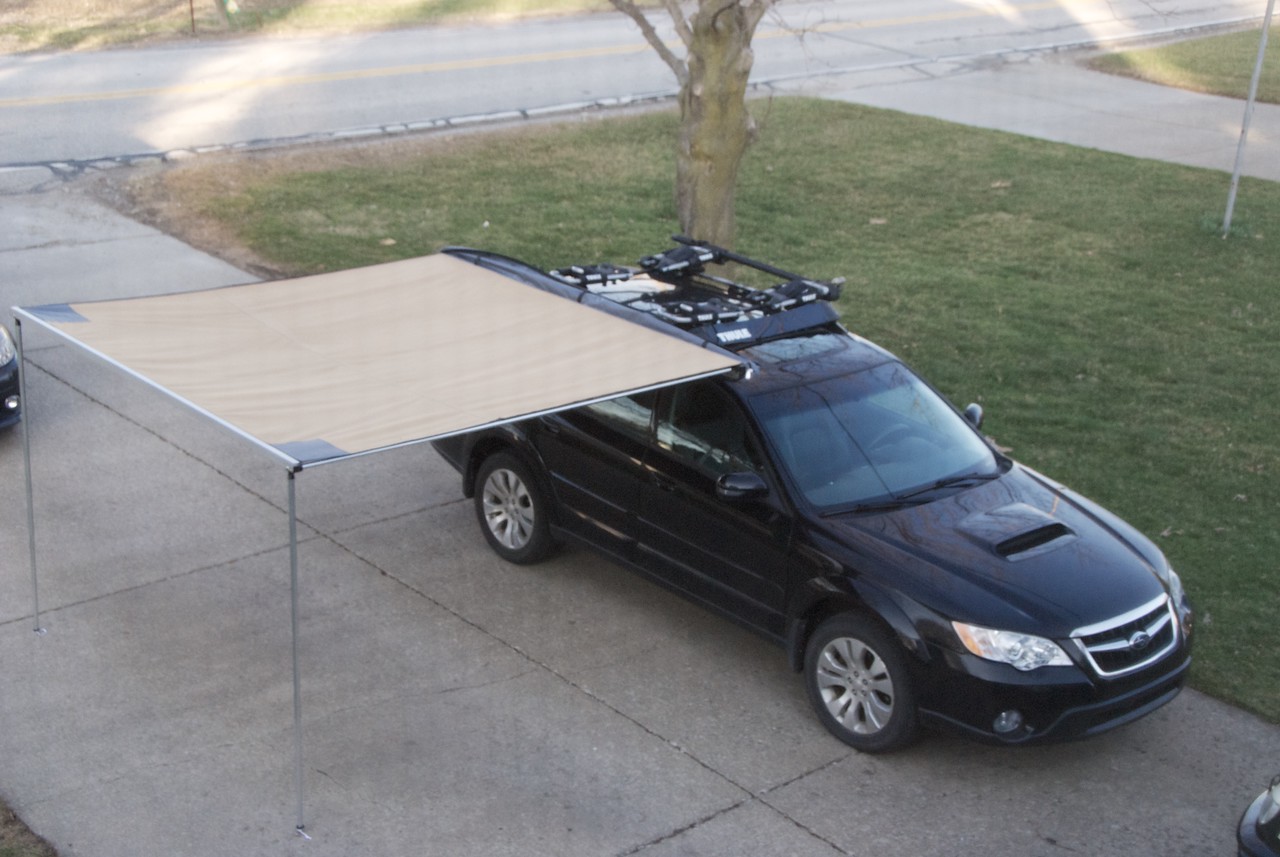 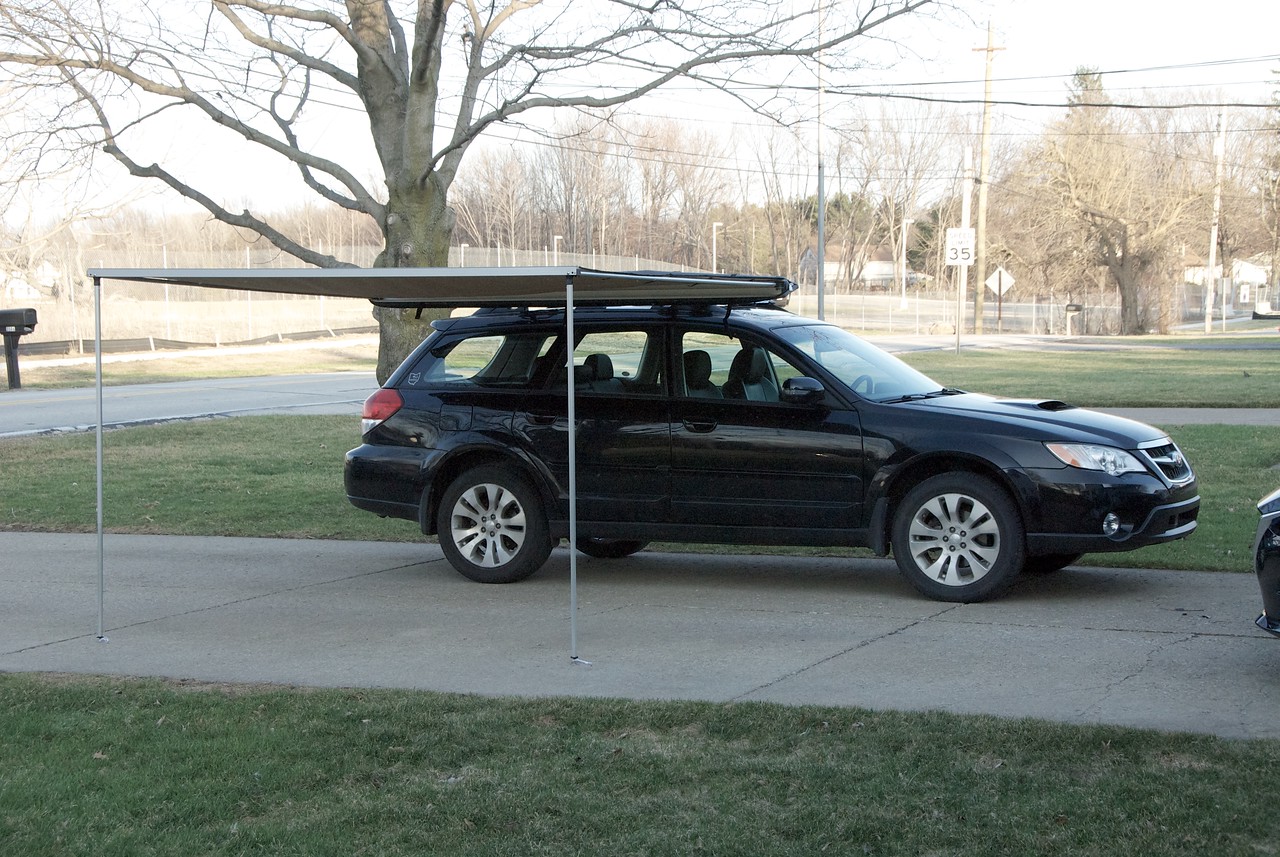 More photos on my SmugMug gallery: http://goo.gl/Aa7eLE
I

Awesome! That is one thing that I have to get after I get my roof rack.  Its on my list. You are right, it needs a little more hight.  looks great Steve. 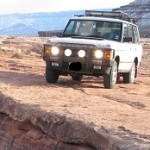 Love the thread and title.  It reminded me of a favorite band of mine, 'OzTent Foxwing Awning is really interesting, though pricey.

You have a very nice Rig. Good call, just use what you have, and if that is what you need, who is gonna argue with that?
Nice awning you have there. Very big as well.

Very nice rig! Looks great. Thanks for posting something on how you guys managed to retire early. It is good food for thought. I'm new to this whole thing but it is great idea fodder.
Reactions: NW David

@Veloun Thanks, and welcome to the Overland Bound forum. It was interesting to see my thoughts back then and what I've done since.