RTT Trailer on a Budget

Mark D said:
Yes, they were about $350. I was curious if I would need shocks because the rubber seems less "springy". So far they seem fine, and I can always add them.

This was great addition to my build also. It was a far amount of work but only about $25 in material and hardware. 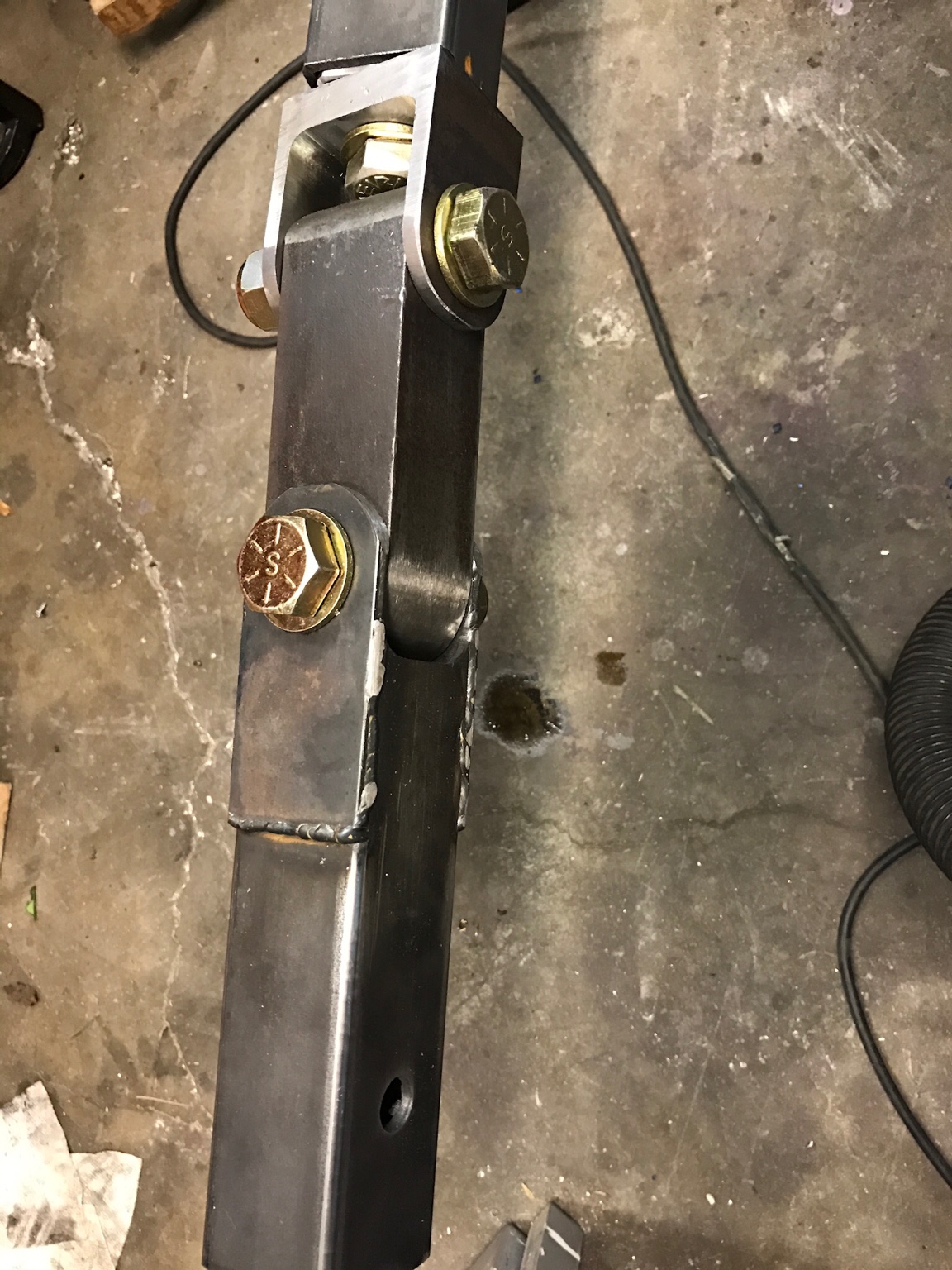 Time had come to paint the outside of the tub. Armed with an orbital sander and a gob of sanding pads, I went to work getting down past the rattle-can paint job of the previous owner, as well as through any scratches and rust. The sander ended up taking it a bit further than I had planned, but it was worth it to get a nice, smooth surface. 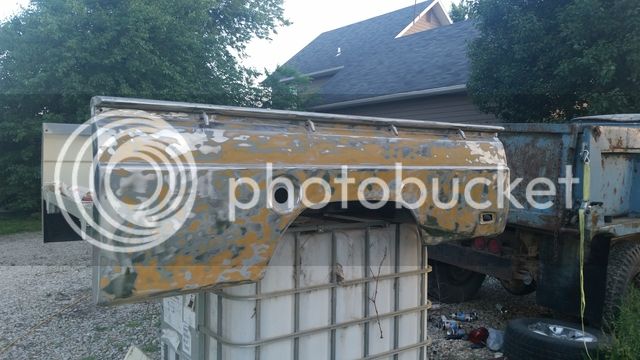 Riight. This trailer's been dragged through a lot over the years, and that mottled paintjob was hiding a lot of dings and dents. No worries, it doesn't need to be a show piece. A coat of self-etching primer: 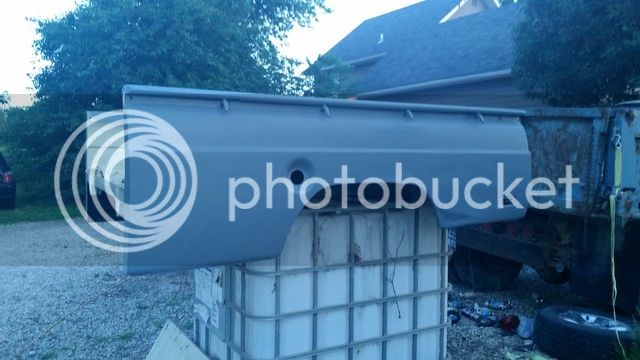 It might speak to how much concern I have for this being a show-quality paint job that I'm painting it in the open air. Luckily, all the little black bugs that get stuck to the paint overnight tend to wipe right off with a rag the next morning... 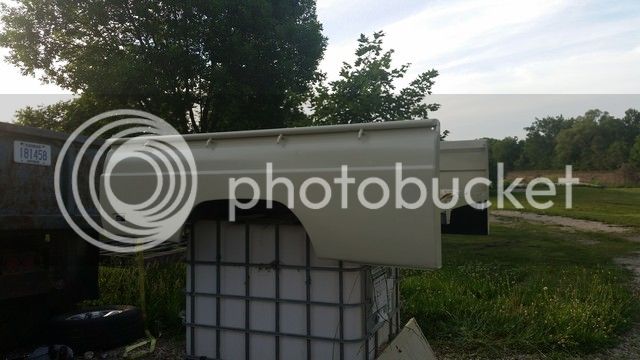 It was time for the tub and frame to be reunited, this time with proper hardware instead of the terrible mish-mash of carriage bolts and random fasteners it had when I got it. 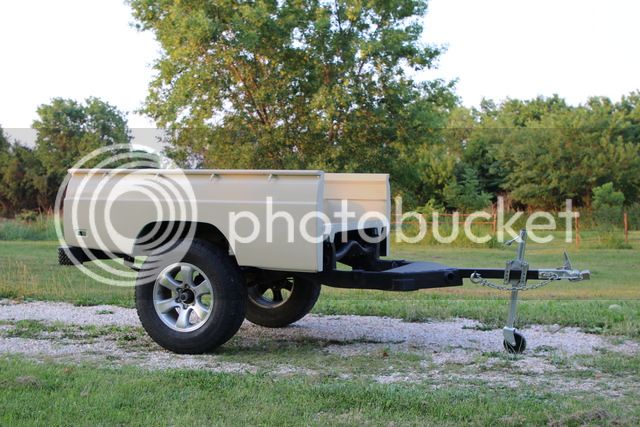 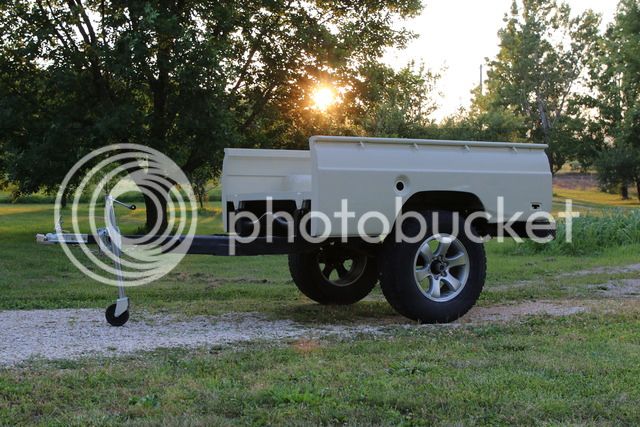 Look at that ground clearance underneath! Add to that, the rear stabilizing jacks are completely hidden from view and the bumper will drag long before they would. 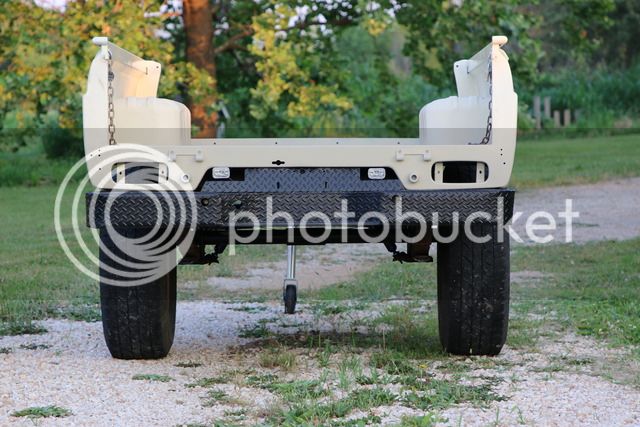 The frame actually hangs just a hair lower than the axle, so I think we're golden! 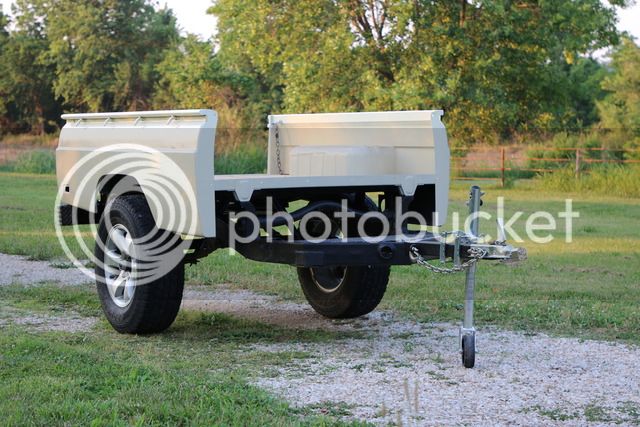 It's good to see an axle swap because I've wondered about the weight of a trailer that utilized a "recycled" truck bed.

I like this idea a lot! I'm searching for the most affordable trailer setup and this might be the way.

With factory taillights crafted from unobtanium, I spent a few hours scouring the Amazon and etrailer.com for a set of taillights that would fit the factory holes and look decent. After not finding anything that was ideal, I settled for these oval LED lights: 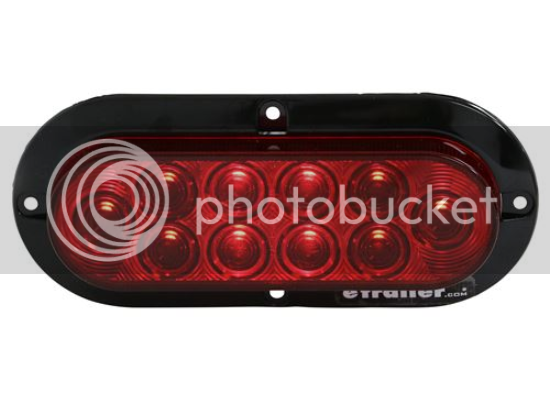 Sadly, they've got a plastic surround, but they'll do.

I didn't want them sitting too deep, so I cut a bit of spacer/bracket from a stick of 1" square aluminum tubing. With this bracket, I didn't need to drill new holes in the existing taillight brackets and the wires that come out the light in the dead center of the rear have a slot for clearance. 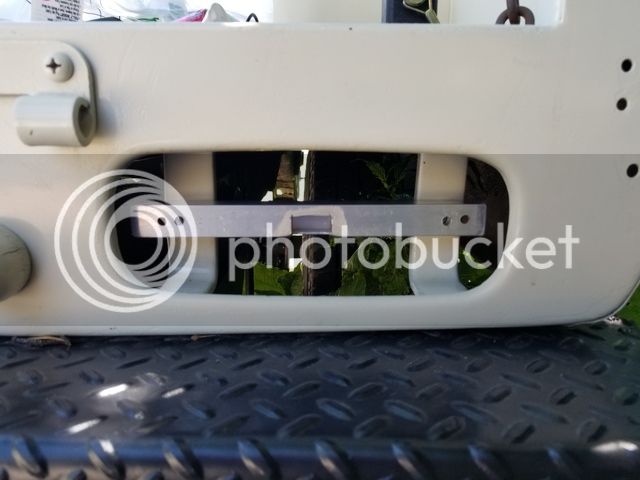 They ended up looking just fine. Better than I expected, actually. 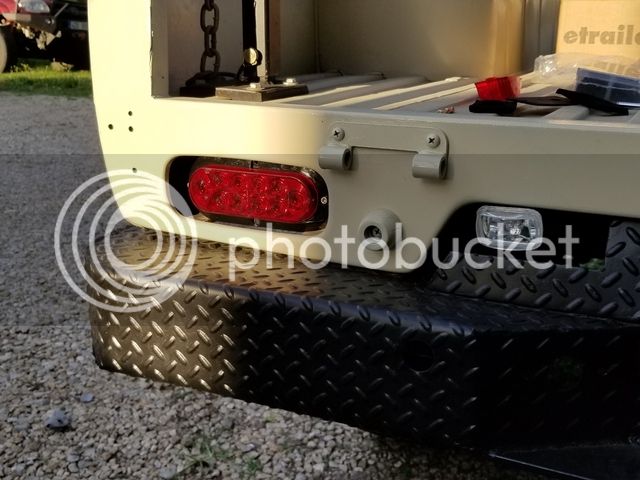 A couple hours of wire-brushing the rack brought it back into shape, so it got a coat of self-etching primer and then some satin black implement paint to make it match the frame. Back in it went: 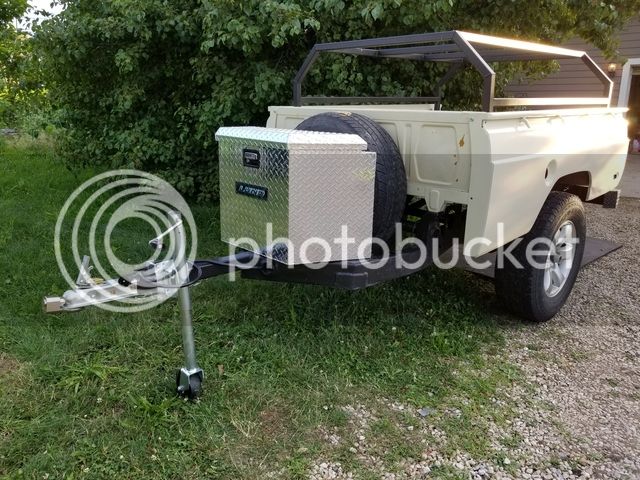 Also added to the front was a 7-pin trailer connector and a tongue box, which would contain all the wiring.

One thing I'd like to note -- after having quite a few trailers over the years and having a ton of wire failures when using cheap and not as cheap wiring harnesses, I took a suggestion off one of the offroading forums (either Pirate4x4 or IH8MUD, I don't know which), and used an extension cord as my wire going back to the taillights. Incredibly happy with that decision. It's got quite a bit of extra shielding than a standard trailer wiring harness, and I'm pretty sure it's got a tad heavier gauge wire in it. It worked well. They contain three stranded wires, which allows you to run a left, a right and a tail. Sure I'll have to run an extra wire for my reverse lights, but I consider that a luxury item, not as necessary as the tails.

Also installed my first trailer junction box, I've always gone the lazy route in the past, but this build will eventually get an on-board battery, so being able to tie into power easily will be handy. 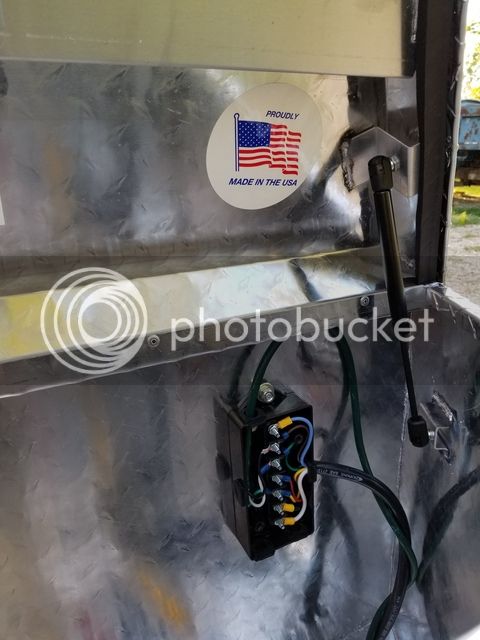 Also ground to fit, painted and installed a set of side running lights. These things stick out far enough that I can see them when backing up in the dark and also give me a bit of reassurance that my trailer lights are working as they light up with the running lights. You can catch a glimpse of them in this picture: 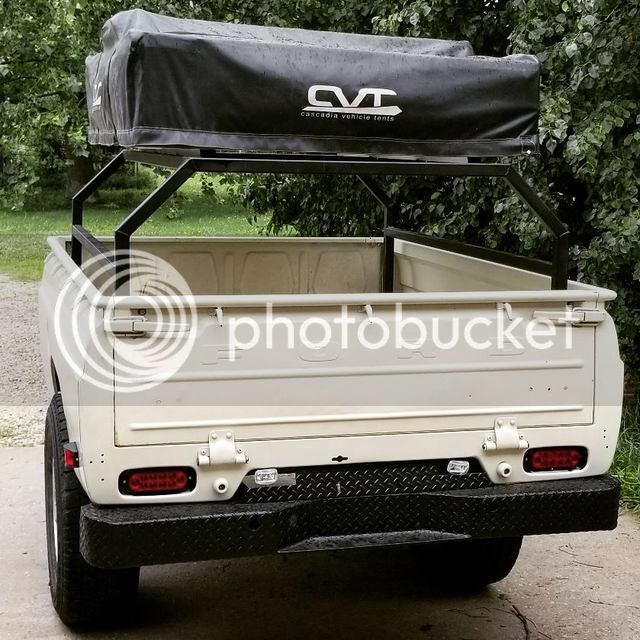 So she's all buttoned up and ready for her maiden voyage -- FJ Summit 2017. Things left to do before the trip: get the permanent front jack welded on, swap on the 5th gen T4R wheels I got for it with some gnarlier tires and figure out some sort of tarp system to keep dust/rain from totally infiltrating the gear in the trailer. 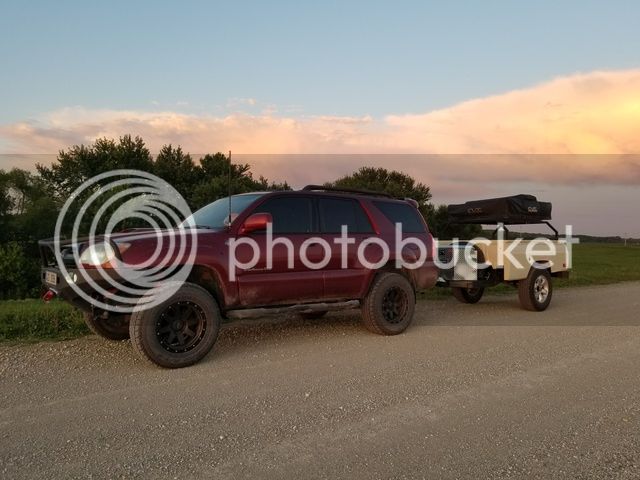 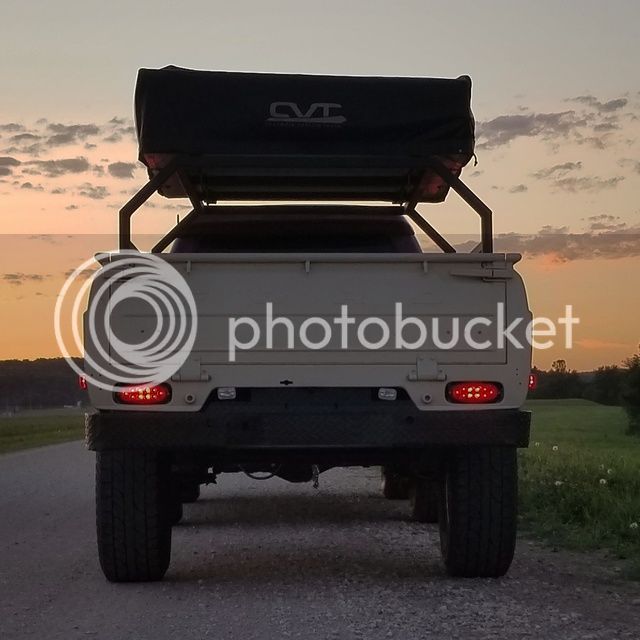 Mark D said:
This was great addition to my build also. It was a far amount of work but only about $25 in material and hardware.

Would you mind providing some more information on this?
E