Pick-ups seem pretty obvious, but SUV's can have a challenge. If you put it on the roof you start to get into the center of gravity issues. If you add these to a bumper you can add an over-stressing of the mounting points.

- Where does everyone carry spare fuel?
- How much is enough?
Reactions: mattarm

How is the aftermarket for bumpers? Get a heavier bumper that will tolerate the load? My swing away bumper uses the frame hitch attach points for mounting so loading is nothing different than tongue weight loading from a trailer.
Reactions: Gunnermoose

For the FJ there are multiple solutions for aftermarket bumpers. Many of the swing-out style attach to the rear door, which then can become a monster to open and close if loaded down. Also has a tendency to prematurely wear out the door hinges. I initially started carrying fuel on the roof in 5 gal jugs, became a pain to get up/down when needed. Then a friend built a small rack that hold the 2.5 gal jugs and that is my current solution. Much easier to move around when needed.

I throw my jerry cans in the back with the rest of my gear. If i have to ill stick them on the roof rack laying on there sides when interior space is limited.

I did a trip from east coast to west coast with 8 gallons of gas in Rotopax containers on my Grand Cherokee. That was nothing. With my JK, I'm running 20 gallons (4 , 5 gal jerry cans) on top plus the weight of a RTT, awnings (side and rear) and Max Trax - all on top of the Gobi Stealth rack. No issues, you just have to adjust your driving style. Don't corner like there's nothing up there, slow down more in advance, I basically drive it like an RV when it's fully loaded. I do also run RotoPax mounts on my tailgate mounted Hi-lift jack to for water containers. I need all my inside space for other stuff.

All that weight, and ask me again why I need 4 jerry cans. :)
Reactions: Winterpeg

Gunnermoose said:
For the FJ there are multiple solutions for aftermarket bumpers. Many of the swing-out style attach to the rear door, which then can become a monster to open and close if loaded down. Also has a tendency to prematurely wear out the door hinges. I initially started carrying fuel on the roof in 5 gal jugs, became a pain to get up/down when needed. Then a friend built a small rack that hold the 2.5 gal jugs and that is my current solution. Much easier to move around when needed.
Click to expand...

When I packed gas on the roof (very large tank) I bolted and strapped it down on my roof rack. I only moved it when it was empty. I filled it when it was already up there and then siphoned (shaker siphon hose) it directly into the tank. Made things pretty easy.
(not much detail to be seen here because it's also in a dry bag and covered in snow but you get the idea) 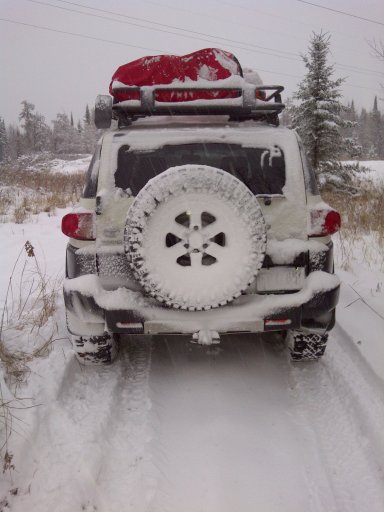 I now have the Exp1 rear bumper with the swingout and have the rotopax bracket attached to it. It is pretty handy to say the least. 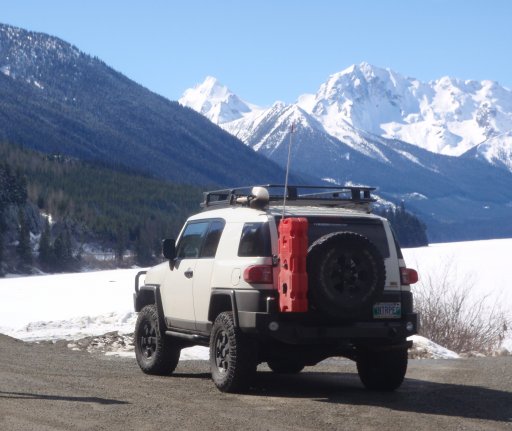 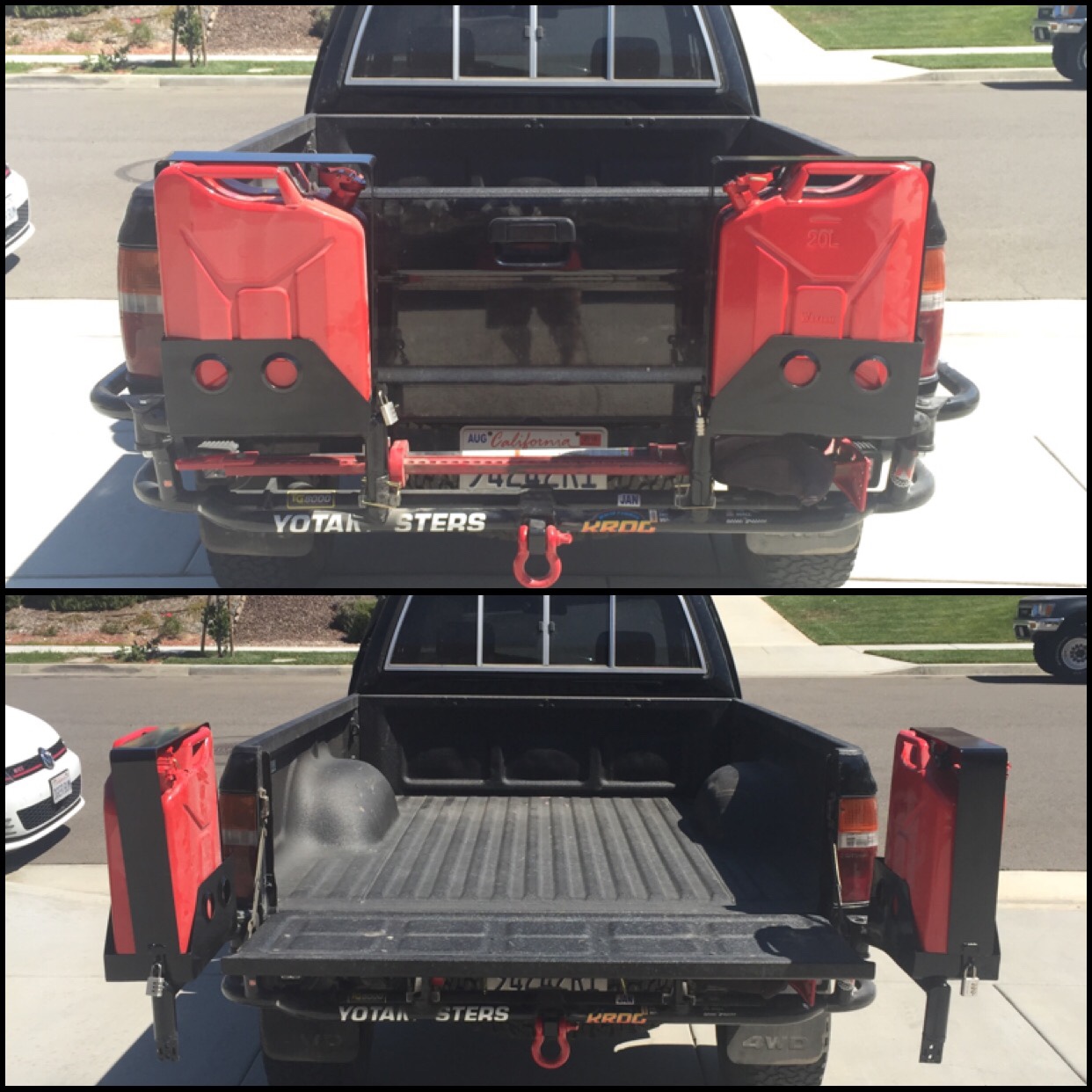 I mounted my Jerry cans on the rear bumper of my pickup. I don't want to take up space in the bed of my truck, I still use it for moving furniture, getting lumber, mulch, etc. I also had them mounted in a way that I can open the tailgate. I don't drive around everywhere with my jerry cans. Just when I go wheelin'. Plus, having the Jerry cans on the rear adds extra weight. There is really no weight in the rear, so it'll keep my tires "grounded".
Reactions: Quicksilver, Gnasher_PNW, sfsmedic and 3 others 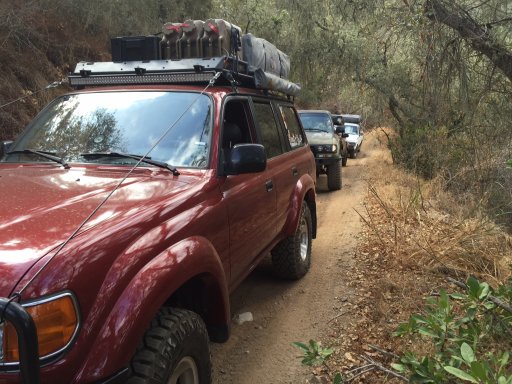 I made on the roof work pretty well for a couple years. You may have to adjust your driving style with extra weight up high. I drive a big box delivery truck for work so my Cruiser feels downright sporty compared to that. But it's finally time and I have a rear Slee bumper and carrier coming very soon so fuel will go on the back. There's no end all rule, do the best with what you got.
Reactions: Travis Barker, Gunnermoose, Luis Merlo and 1 other person

Jerry cans off the swing out work well. This will sound funny coming from a guy with an RTT but you want to be careful getting to much weight up top. Keep that center of gravity low. 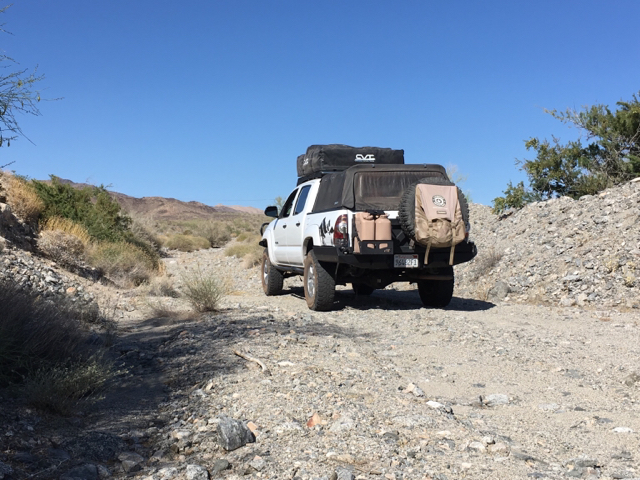 Jerry cans off the swing out work well. This will sound funny coming from a guy with an RTT but you want to be careful getting to much weight up top. Keep that center of gravity low.

It all really does depend on where you are what type of terrain you drive often etc.

Side mounts worry me because it widens my vehicle. That wouldn't work in situations like this. 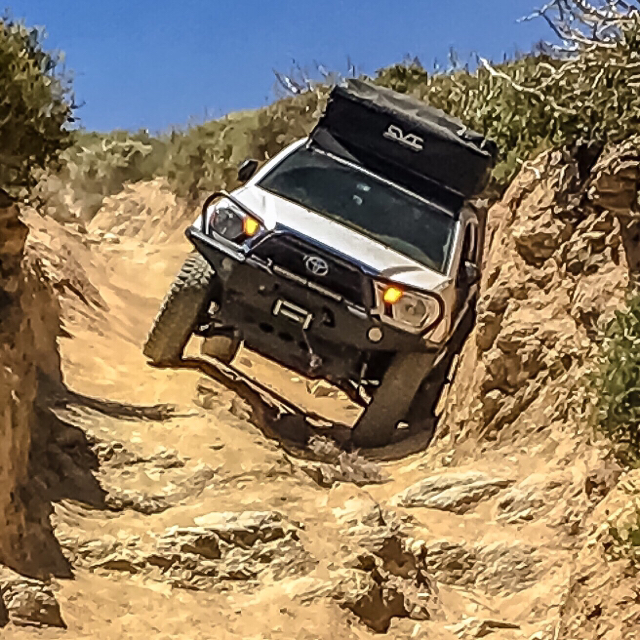 But the downfall to my setup is it could be higher. I've sacrificed departure angle somewhat.
Reactions: shoredreamer

I have mine mounted to my spare tire arm. 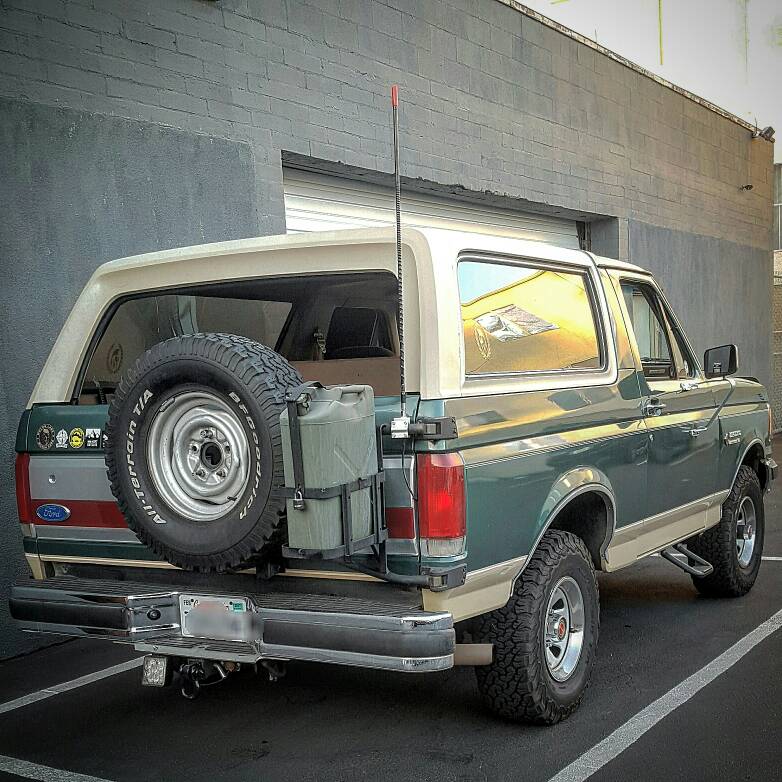 Mine is just a 5 gallon can on its own swing on the custom bumper. At times I have put a couple extra cans in the roof rack, but really have not personally needed over the 5 on the rear. I would like to convert that arm to a more useful basket platform and use two 2.5 gallon cans on the roof to keep the profile low, but not reduce storage. Or possibly invest in one of the flat pack fuel cells as previous comments show and lay it on the floor of the roof basket. 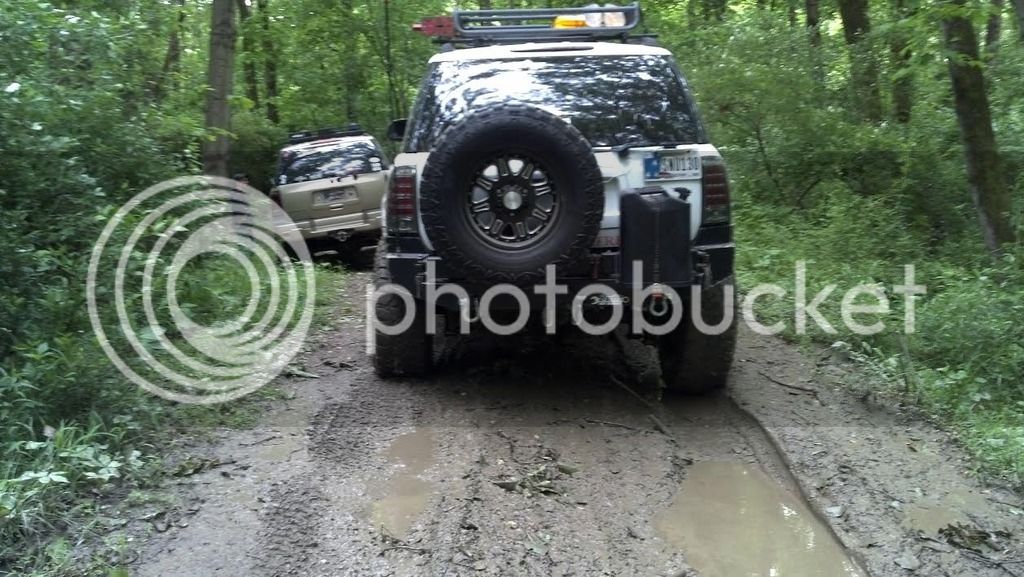 shoredreamer said:
View attachment 5429 I made on the roof work pretty well for a couple years. You may have to adjust your driving style with extra weight up high. I drive a big box delivery truck for work so my Cruiser feels downright sporty compared to that. But it's finally time and I have a rear Slee bumper and carrier coming very soon so fuel will go on the back. There's no end all rule, do the best with what you got.
Click to expand...

So I used to do this as well, but I'm going away from my Roof Rack rapidly (gratuitous consonance). I plan to go to something smaller, there are numerous reasons, but it leads to me finding other ways to transport items. Fuel being one of them, I always carried two or three jerry cans on the roof, but I always hated that weight, and the hassle. Once I had a seal fail on a Sceptre can and it leaked gasoline all down my windshield and A pillar. That made me change right there and then. I bought RotoPax 2.5s and mount them on the back, and that is part of the planning for my rear bumper, dedicated RotoPax mounts. That is by no means a knock on Sceptre, the seal was old and should have been replaced, I'm not even positive it was a Viton seal, as I was pissed and threw it away. The 5 gallon cans are just a hassle to deal with fuel in. they are too heavy for the wife or kids to refuel the vehicle from gracefully, and just difficult to deal with. I still absolutely use them for water though.

I've run this basic setup for over 8 years. Started out with 2 red Blitz cans. During my first crossing of the Mojave Road, a lot of fuel spilled on the tuck from the CARB caps. After that I've picked up some NATO style cans. I've never had a single issue with leaks, even though the gaskets should be replaced on my current cans. The mount is from Front Runner. It's adjustable to fit cans that aren't exactly to the NATO standard and have accommodations to fit a pad lock. It's mostly for security of the latch itself, not from would be gas thieves.

How much fuel to carry varies by a lot of factors. If you're in Hi or Lo range, hard/soft terrain, available fuel stops, size of tank, etc. I typically carry two cans for anything more than a day trip. If it's not used on the trail, it'll get dumped into the tank on the way home. The mount is for dual cans so it's always multiples of two for me. Sometimes I used to do the water can and a gas can up there, but wanted faster access to the water, so it's inside the cargo area now.

On a week long trip to Death Valley, I carried x4 Jerry Cans. Even if you can get fuel, you may be paying twice as much for it. Just don't let them see you filling from your cans instead of buying their gas ;) But depending on your situation, you may well need to refill the cans with the expensive gas anyways. And in reality, I usually don't mind paying the increased price for local gas. If it helps keep that station open, or that little town around for the next time I'm there, it's ok with me.

My best tips if you carry fuel on the roof are these.

Empty your cans ASAP. Don't wait days until you're down to a 1/4 tank to dump the Jerry cans. That whole time you're driving, you're reducing the weight down low by consuming gas, but that 60 lbs. of fuel (plus the weight of x2 cans) continues to sit up high on the roof.

Use a Super Siphon. No sense in unloading full cans off the roof, just to hold them while pouring fuel into the tank. Stick the open end of the Super Sipohn into the filler neck, and the rattly end into the can. After a couple shakes you'll have free flowing gas dumped into the tank in no time.

Store the cans near the filler neck. You don't want to lug full cans from the front to the back of a loaded roof rack. Some mounts won't allow a Jerry Can to stand upright inside the lower holder, so you'll need space to set the can upright elsewhere. 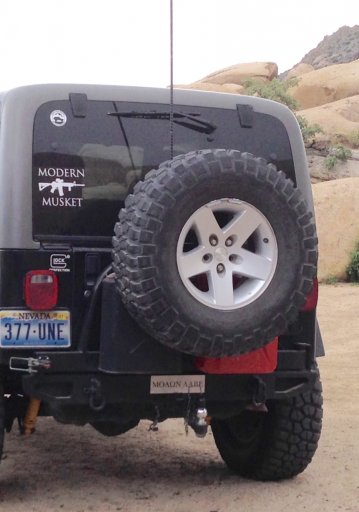 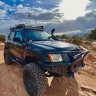 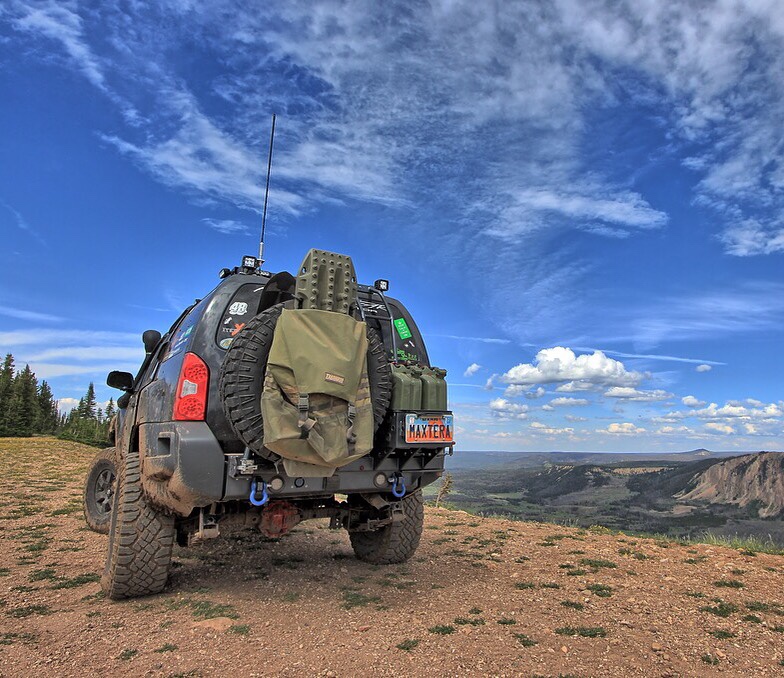 Yep. Two on the bumper and can carry more on the roof rack if the RTT isn't up there.
I agree with other suggestions to put the fuel in the tank as soon as possible.
Really improves the ride and handling.
Also a little safer with the fuel where it should be.

In Europe, I don't think it's legal to carry fuel on the rear of the vehicle (even in a carrier). Also I believe you are only allowed to fill Jerry cans upto 10 litres at many fuel stations. The only real option is probably fitting auxiliary or extended fuel tanks.
Last edited: Jul 11, 2016


I haven't had to use my extra fuel too often, but it is a problem. My 20 Gal tank doesn't last long, especially pulling my boat at 10mpg.

I am using 5 liter nato/wavian jerrys on front runner tank mounts. I have them mounted with some rubber lined steel hose clamp bracket things and some other hardware. It is easy enough to stand on my rack or the sliders and get the cans down, but they are a bit heavy. My requirements for anything on my rack though is that is is lockable and secure without straps or anything that takes a lot of time to deal with. I have to be able to park it shady-downtown-anywhere but also live with it middle-of-nowhere. 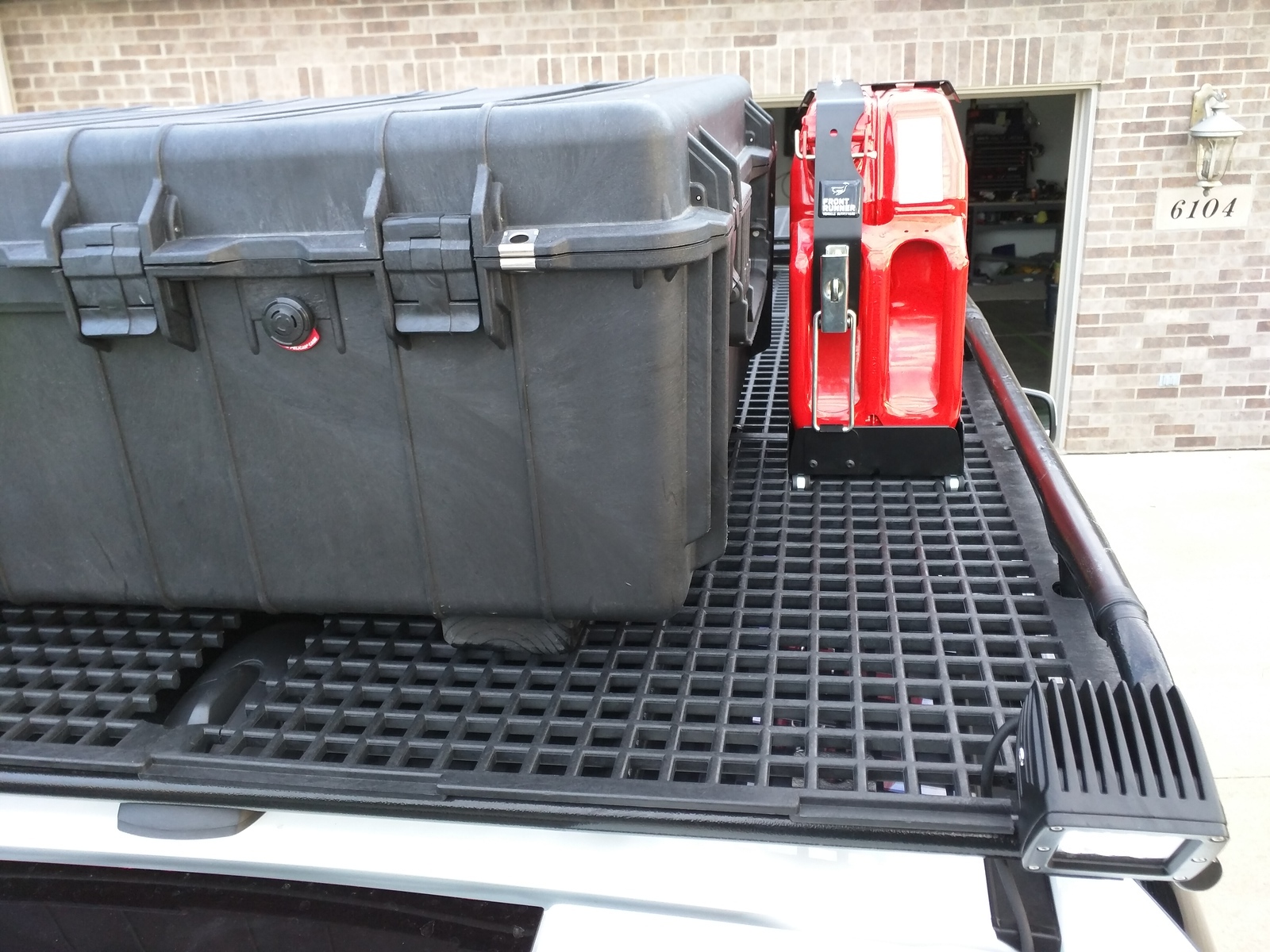 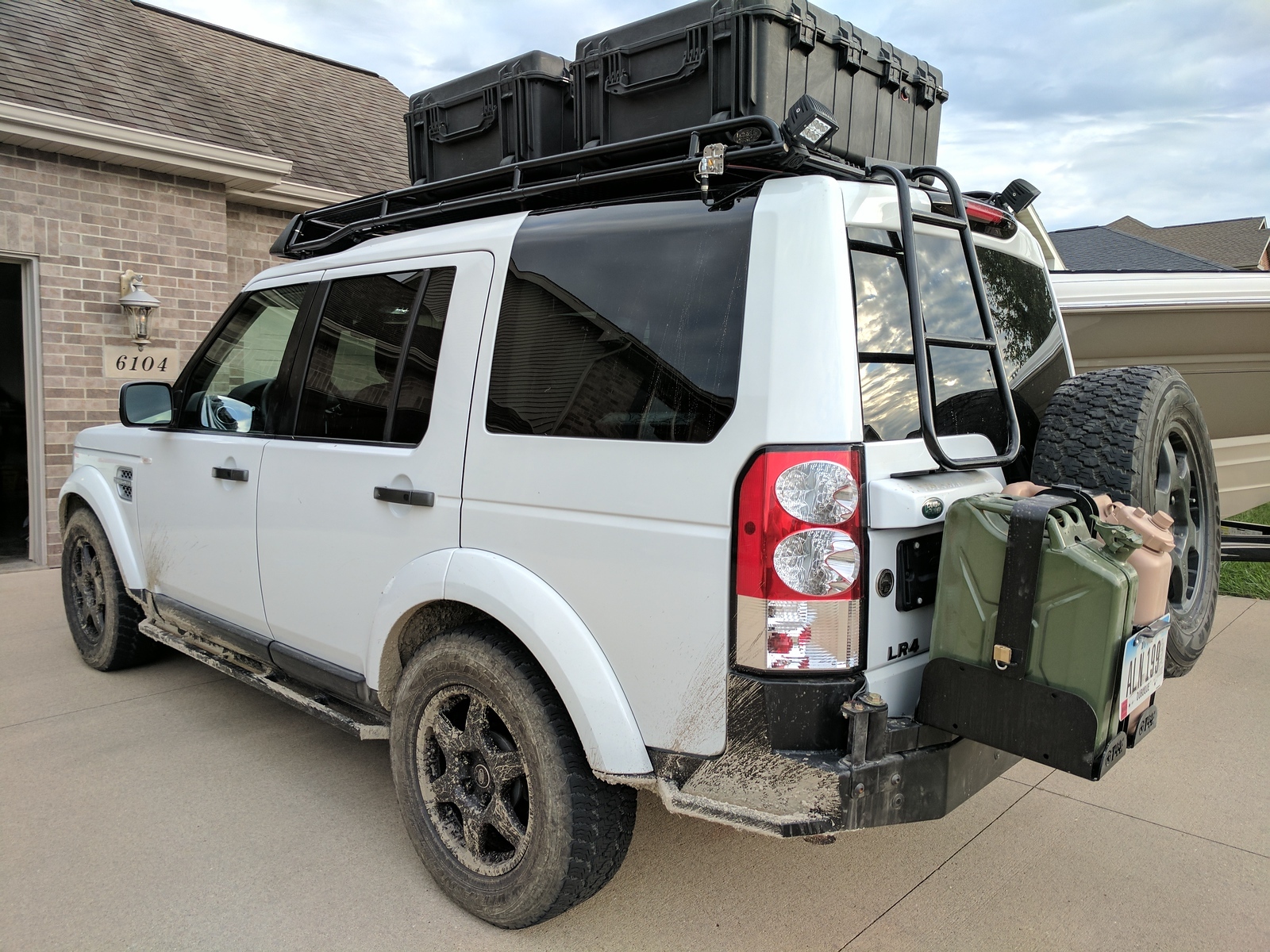 I carried a Scepter MFC Jerry strapped to the side of the bed under the canopy.
Sort of like this; 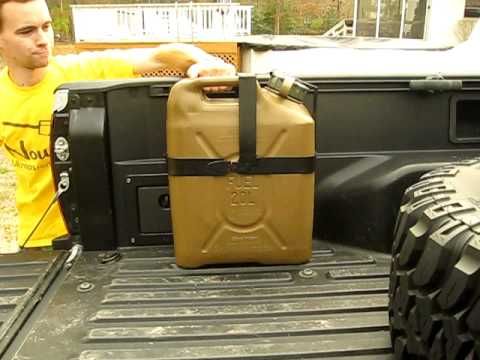