On my 1990 4runner, I just drilled a RAM base into the dash and called it good, no air bags to worry about and who care about putting holes in a dash that is already wrecked from 28 years of sun. I was pretty happy with this setup in my 90', and I still use it. 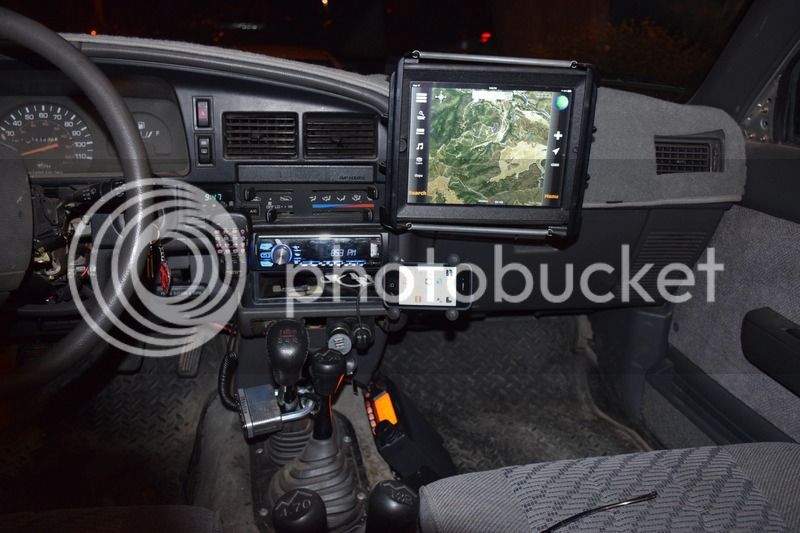 But in our 2007 LX470 I wanted to be a little more careful. I am now using a Samsung Tab a 10.1" tablet along with Gaia for navigation. The bane of most tablet mounts is their tendency to shake like a hooker in church when you get them off road. Hanging a bit of weight off a levered arm means they can vibrate with every bump in the road. My goal was to make a mount that was as stable and secure as possible.

I started off by making my own tablet cradle. My old RAM cradle for the iPad ^^^ just didn't hold the Samsung that well. The Samsung was swimming in the cradle So I made my cradle out of 16 gauge. The tabs on the bottom, left, and right, will hold the tablet in place. 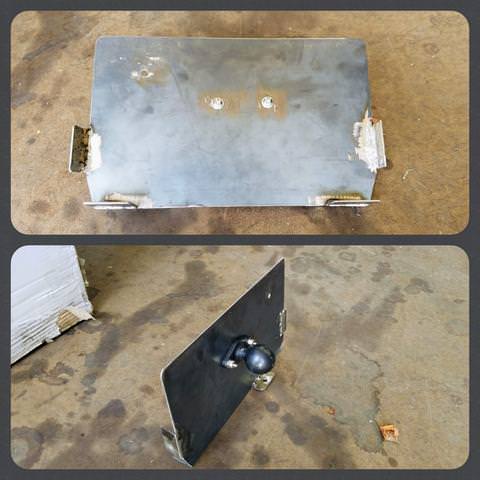 With the cradle taken care of, it was time to figure out how to mount it. I ordered a Panavise mounting plate that screws into the interior of the dash. From this I attached an RAm 1.5" mount ball. 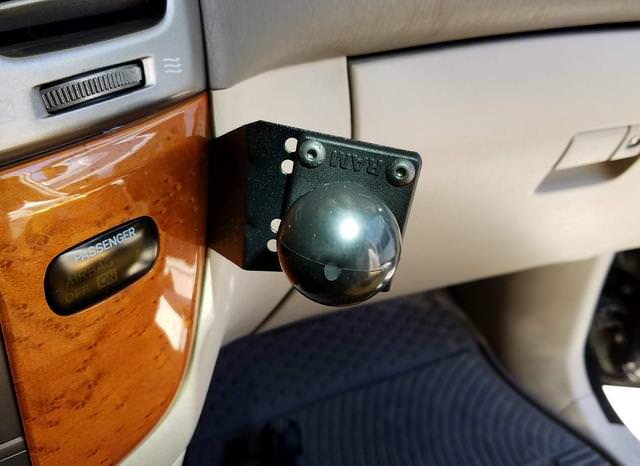 So there is the first attachment point. Next I found a spot for another RAM base on the shifter bezel. 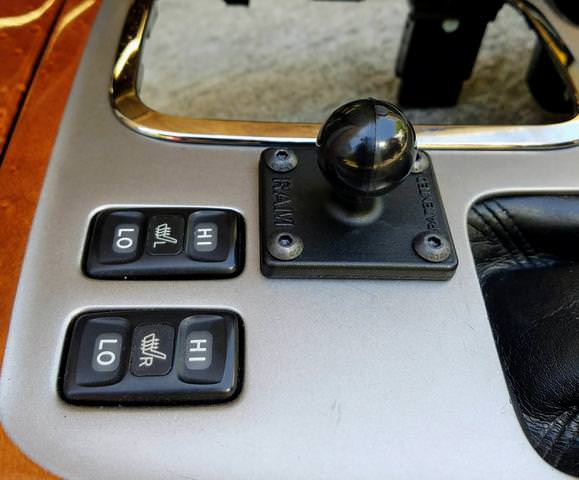 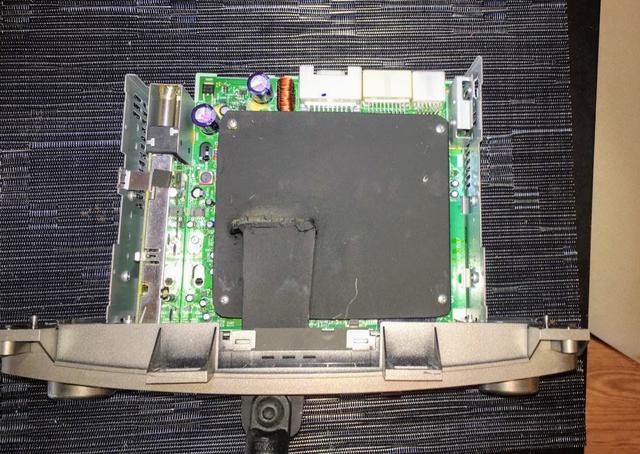 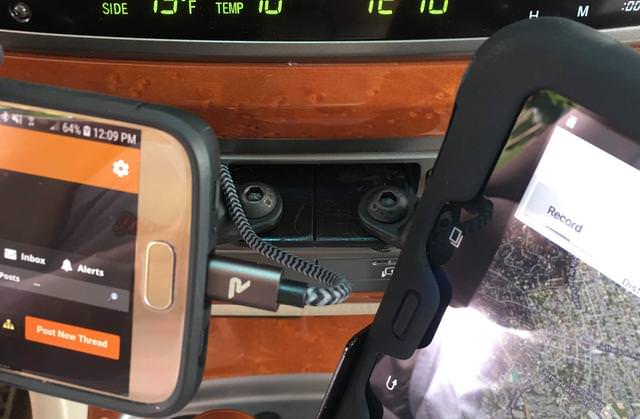 So with my three cradle attachment points, I pulled together the right combination of RAM balls, joints, arms, and here are the three arms that will hold the cradle I made 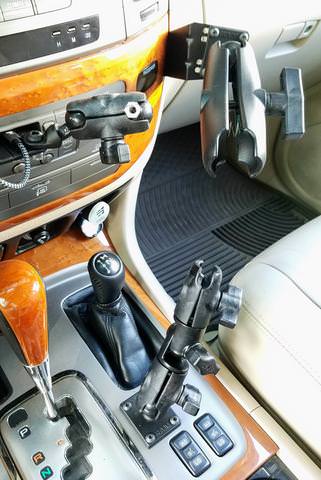 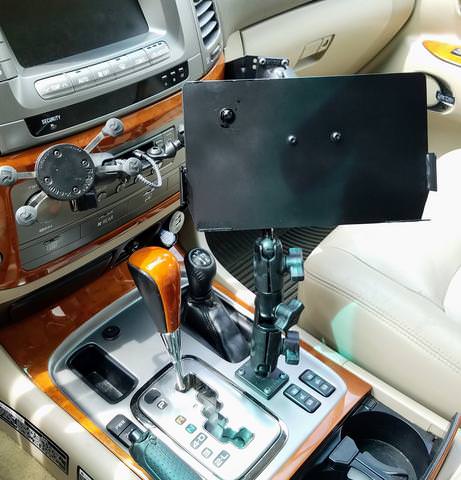 And finally here is the whole enchilada, the three mounting points, the cradle, the tablet, and you can also see my cell phone mount on the left 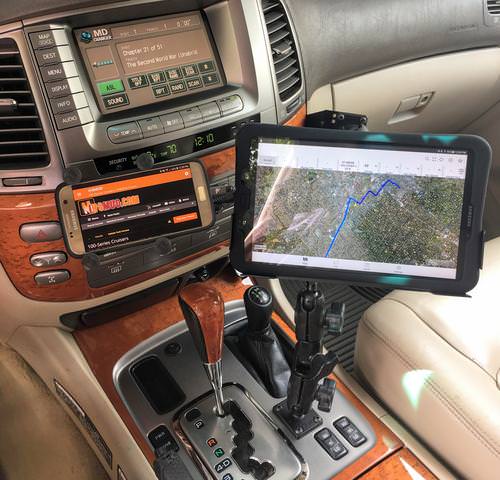 The table mount is extremely solid because the three attachment points eliminate vertical and lateral movement. The overall price tag for the whole setup was about $80 in various RAM pieces.

And overall I'm also really happy with the Samsung/Gaia hardware and software combination for my mapping and navigation needs. I was using MotionX previously and while that also was a fine program, I think I prefer Gaia over MotionX.
Reactions: StuntmanMike, Kyle & Kari Frink and Phessor

Very nice. Our 98 is at a premium for dash space as well, and I've thought of going to a tablet from our Gamin Montana but hadn't thought how to mount it. Thanks for the ideas and good work!
Reactions: v_man
You must log in or register to reply here.
Share:
Facebook Twitter Reddit Pinterest Tumblr WhatsApp Email Link
Top Bottom