Not what you want to come out and find after you've just run in for a sandwich.

Better in a subway parking lot than on the trail.

Sent from my iPhone using Tapatalk

We think it's a valve.

Either way, the head has to come apart.

We're going to scope it to be sure, and do all of them while it's opened up.

As much as I don't want it to happen, I'd rather find anything else while its torn apart.

Man, it seems like your having a rough stretch with your rig. I hope you get it sorted first.
Reactions: WJ - Firefly

I wouldn't call it a rough patch. Aside from the work that needed to be done when I bought it, this is the first time it's left me stranded.

Everything else are things that I wanted to do, and didn't make the right decision when I did it.

But thanks. This is a big one. Hopefully it gets it back to the place I can trust it on the trail.

Time for that Nissan?!

Here's some of the initial carnage from Cylinder 4. Both the intake and the exhaust valves were toast. 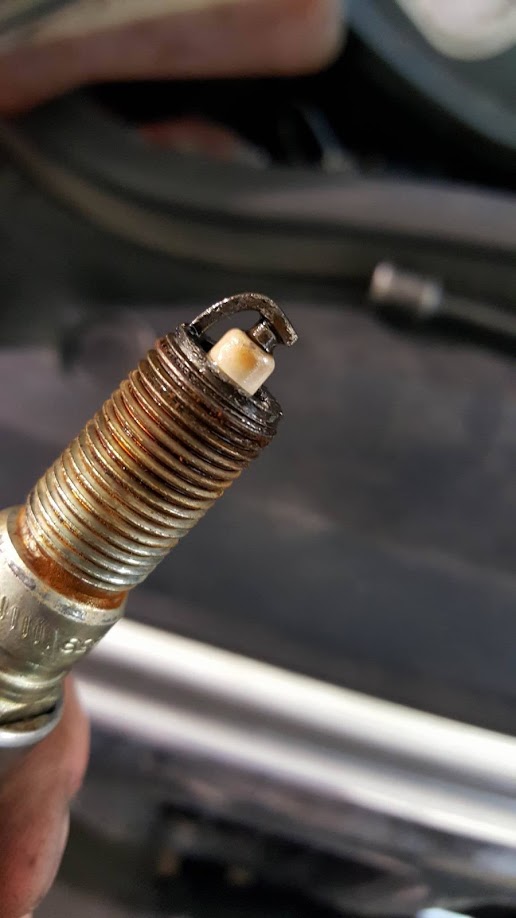 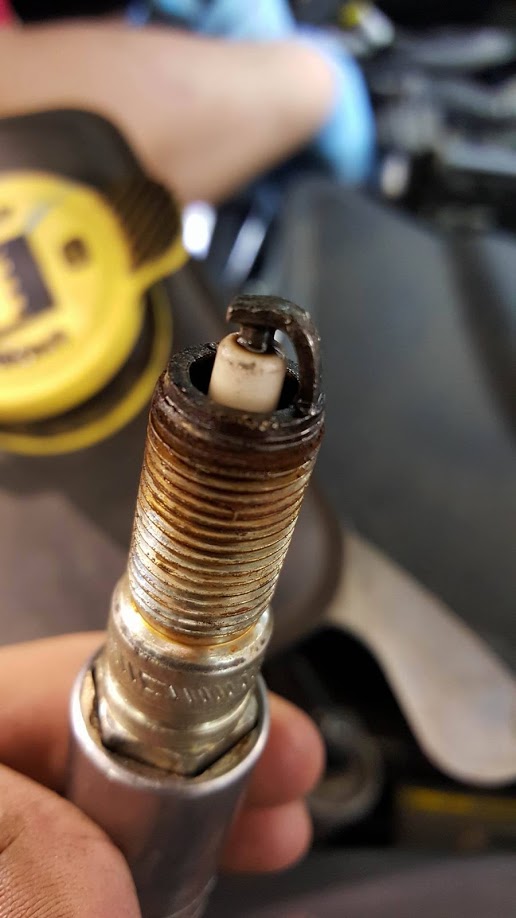 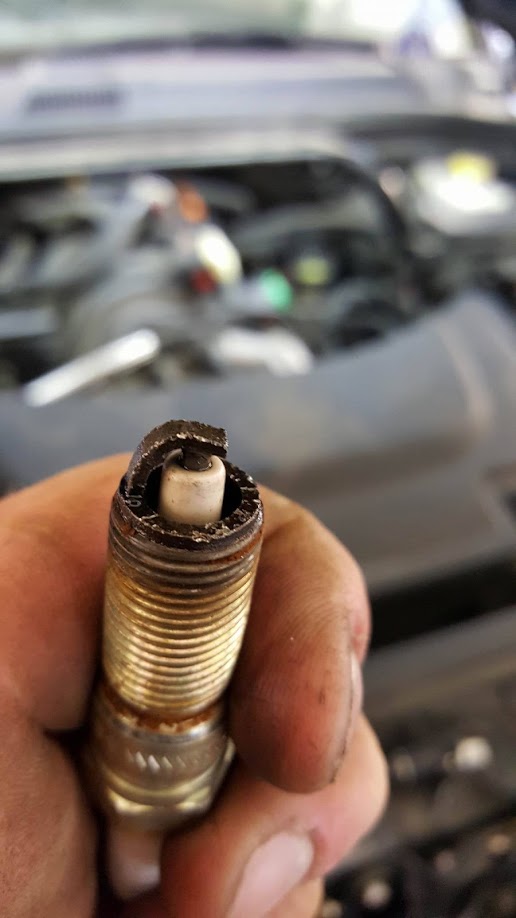 Im so sorry this happened to you. It's happened to me as well, right at the bottom of lions back in Moab. On day one of a five day Moab Jeep trip. I felt so betrayed by my Jeep, I sold it and never looked back. That was in 2003. I know it's a bit silly to anthropomorphize a truck. But at the time I had done so much work to it, and had invested so many resources, for it to fail the way it did, it felt personal. I hope this is only a minor setback for you.

Pazuzu1991 said:
Im so sorry this happened to you. It's happened to me as well, right at the bottom of lions back in Moab. On day one of a five day Moab Jeep trip. I felt so betrayed by my Jeep, I sold it and never looked back. That was in 2003. I know it's a bit silly to anthropomorphize a truck. But at the time I had done so much work to it, and had invested so many resources, for it to fail the way it did, it felt personal. I hope this is only a minor setback for you.

Yeah, I don't know how long it's going to take before I trust it again. Hopefully it's only a minor setback.

So... with everything apart it's worse. The #4 Piston. That's light you can see coming through the head. I don't have any idea how the hell something like this happens... 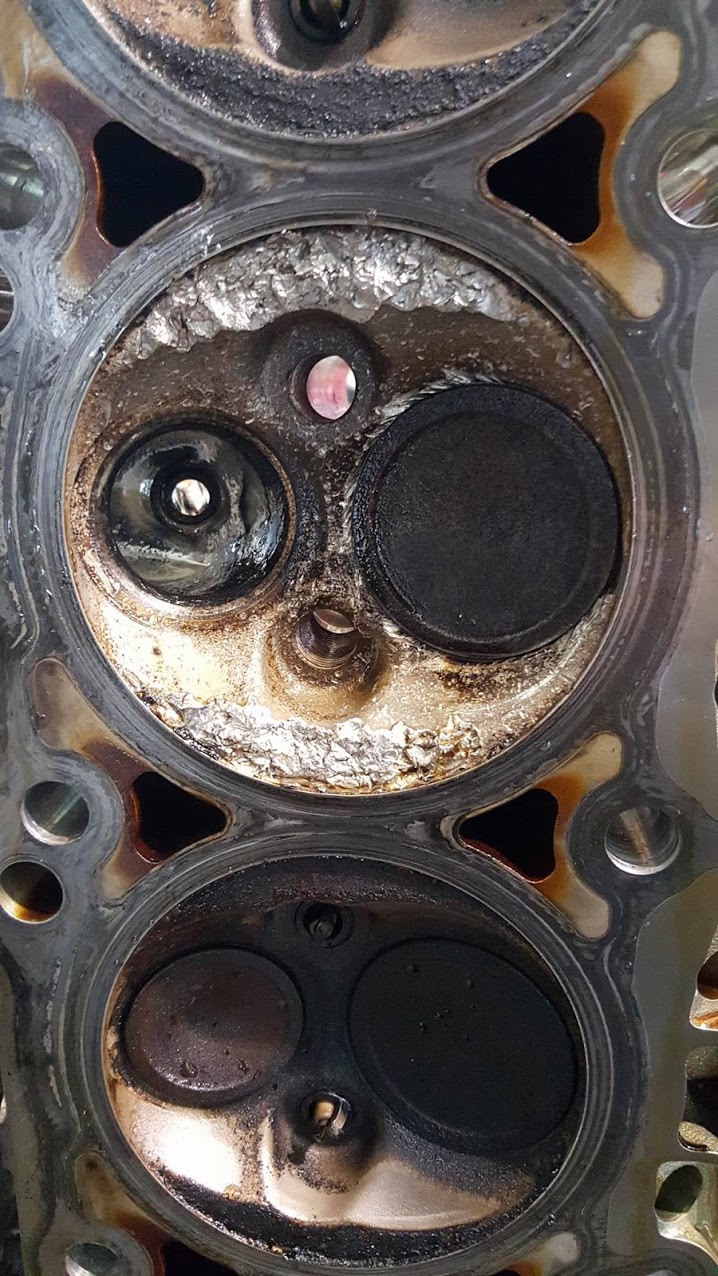 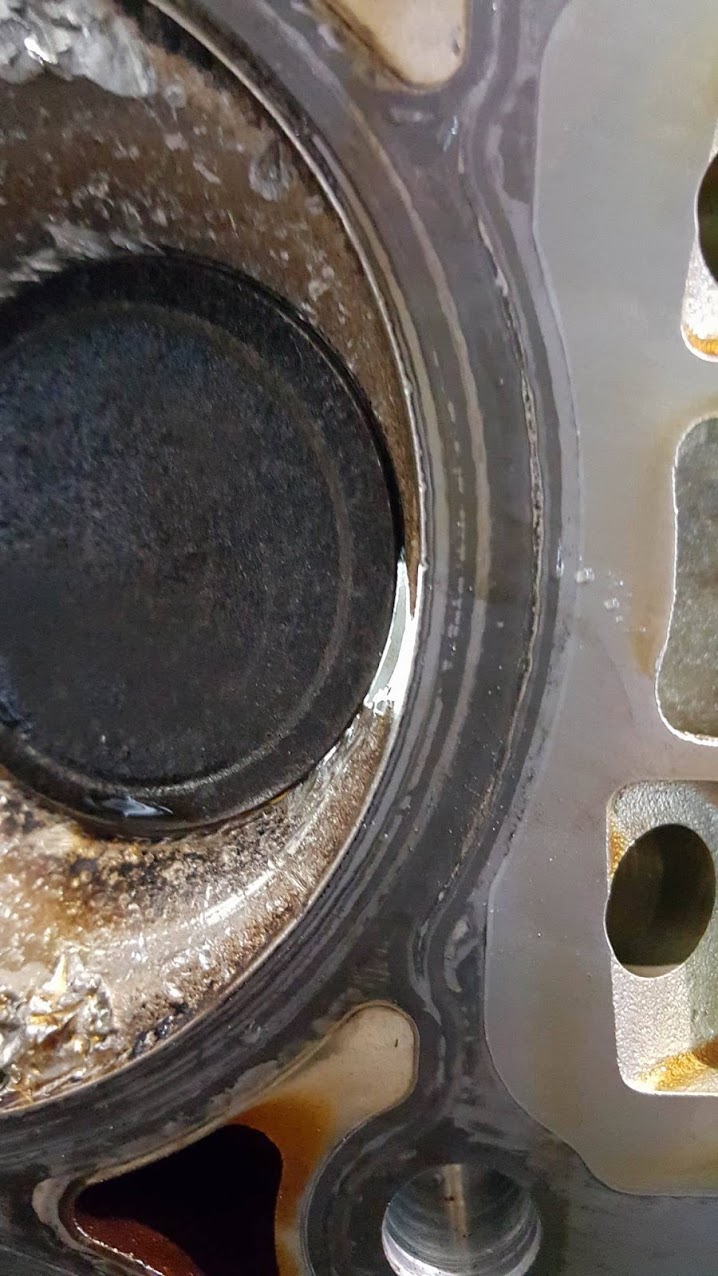 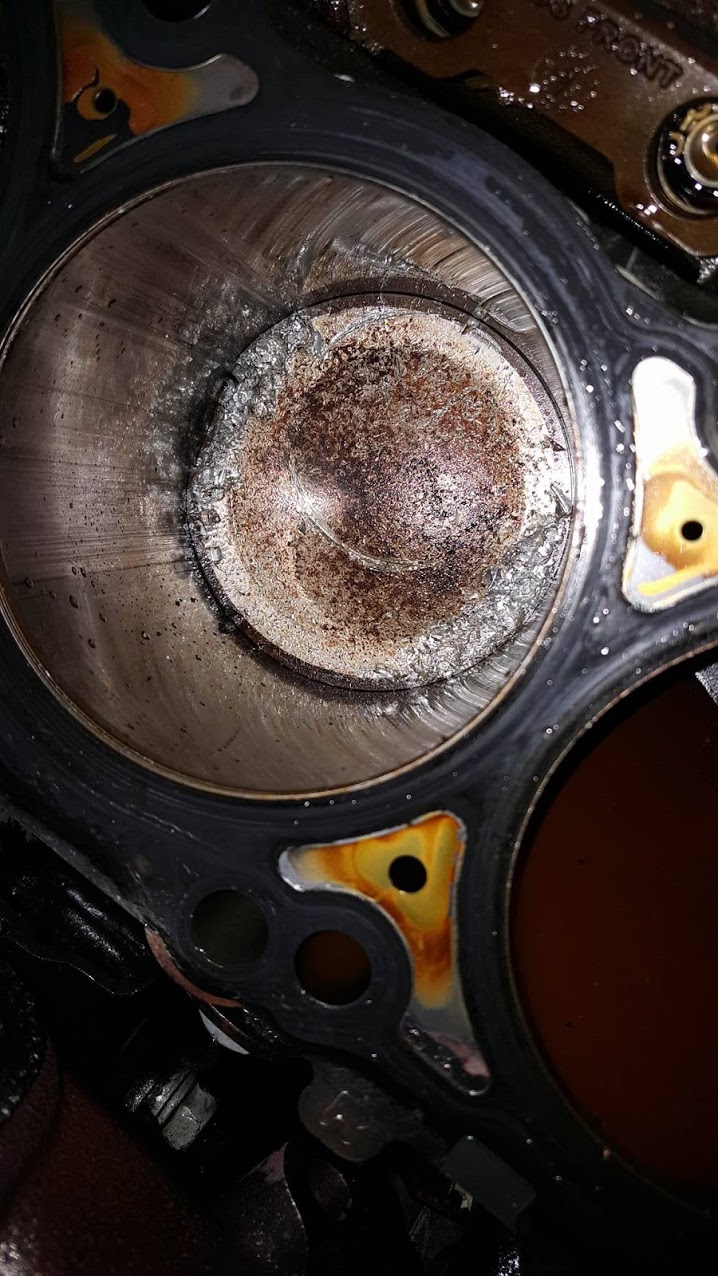 To long a plug or your rod bushing or bearing went out. That looks just like my engine did, a pice of the piston broke off and hammered everything inside the cylinder wall and head. When mine did it, I was idling in line, just relaxing waiting and idling.

The piston itself has some damage, but it looks like a piece of the head broke off and got crushed.

It means new motor for the poor XK.

Time for that Xterra

So... Things are happening! 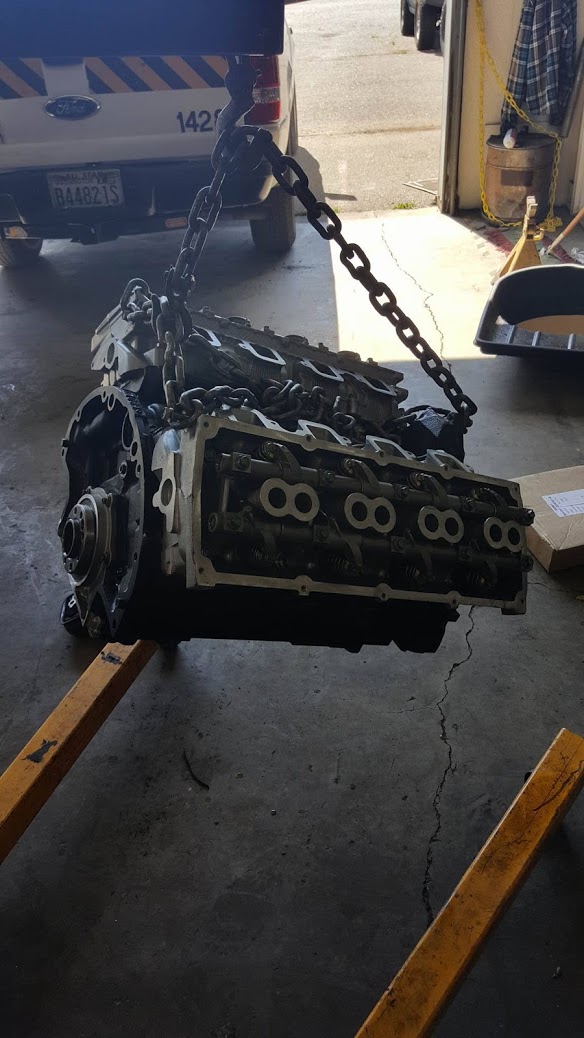 Reactions: benmmc and Steve
B

I've always loved the Commanders. I own a WK (Limited, 4.7 V8) now as a daily driver. Does your XK get better mileage than the WK?

The new motor is in! First 500 miles on the odometer! First Oil change tonight!

I forgot what a new 5.7 sounded like
Reactions: benmmc and WJ - Firefly

Well, it happened. I finally got sick of the crappy Nav unit in the XK.

No Bluetooth, no aux input, no USB... It just wasn't working for me anymore.

I went a little (well a lot) overboard, and picked up a Pioneer SPH-DA120 with the "RadioPro 4" RP4-CH11 harness kit.

Some things worth mentioning. The input for the amplifier from the factory are only left/right with a different wire to control the front/rear fading. That caused some issues. If you just hook this unit up to the harness, front to front, left to left, etc. you end up with only the rear channels pushing sound. on an old school head unit, that might be alright. The problem her, is that all the bluetooth, navigation, messaging... basically everything interactive with this unit is only sent out the FRONT speaker lines.

After finding that out, I gripped and stomped around the house for a while. Then I pulled it all apart and rewired it so that the front speaker outputs went to the rear speaker lines on the harness. No ability to fade, but it doesn't seem to have any adverse affect on anything, and isn't bothering me.

There is a setting on the unit to "disable rear speakers", so now there isn't a fader option, and it seems that all the power from the 4 channels is dedicated to the "front".

That caused another issue. the volume controls were SO SENSITIVE that going up or down one notch was either too loud, or too quiet. Fortunately, Pioneer decided that it was a good idea to give me the ability to set the gain on each speaker output. So, after a little fiddling, I ended up somewhere between -15 and -20DB.

It has the ability to adjust the input gain of all the inputs relative to the radio. That's a nice feature.

After all that, the volume of Siri was SERIOUSLY LOUD! It took a little bit of hunting before i realized that Siri (including navigation) was controlled by the "alerts" volume control making it a little harder to adjust than it is on uConnect.

With the exception of the navigation directions in gauge cluster, I would have to say that i prefer this unit to the factory (8.5 inch) uConnect in my '14 Trailhawk.

Of course, I didn't remember to take pictures of the original carnage of disassembly... 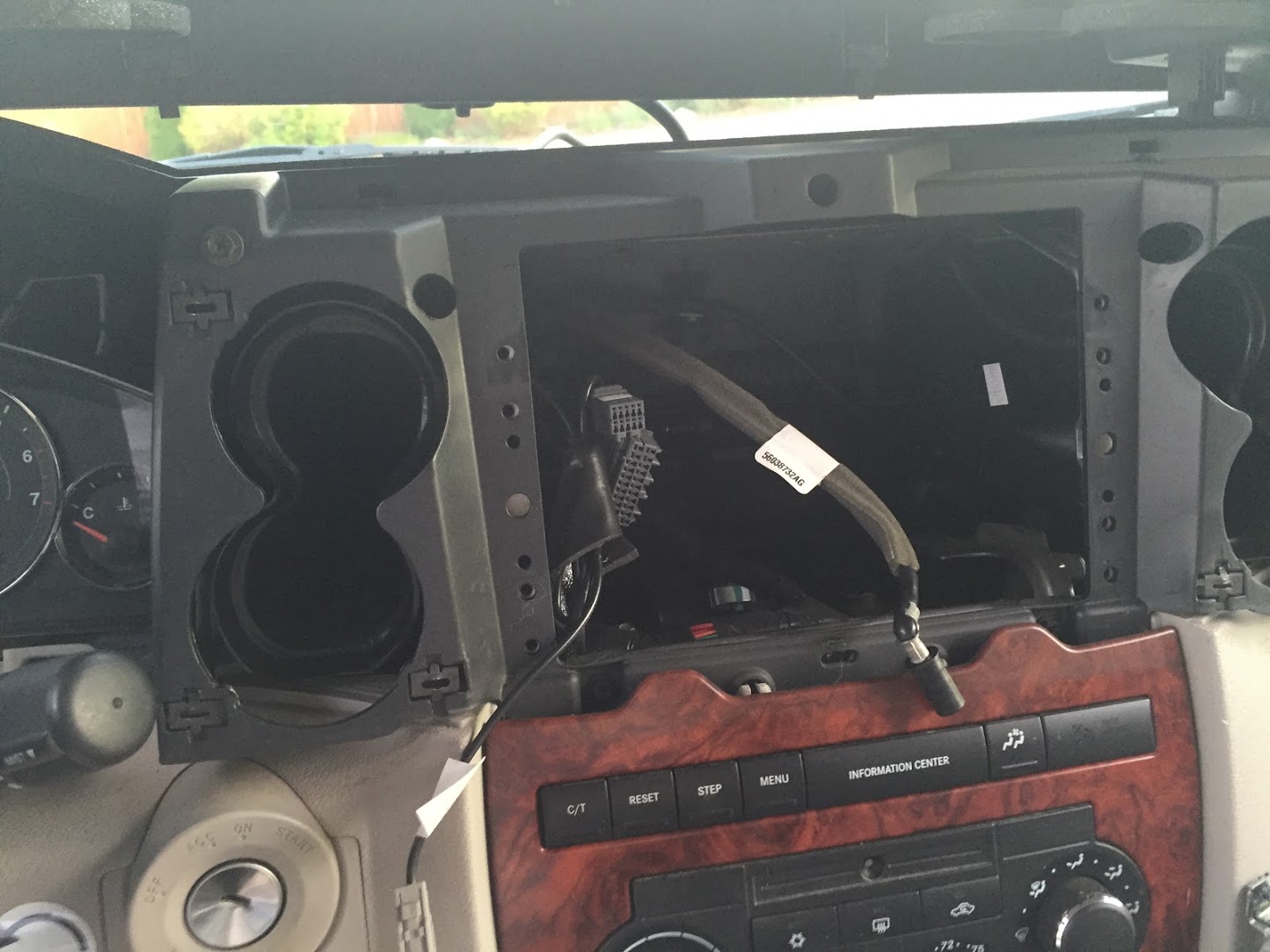 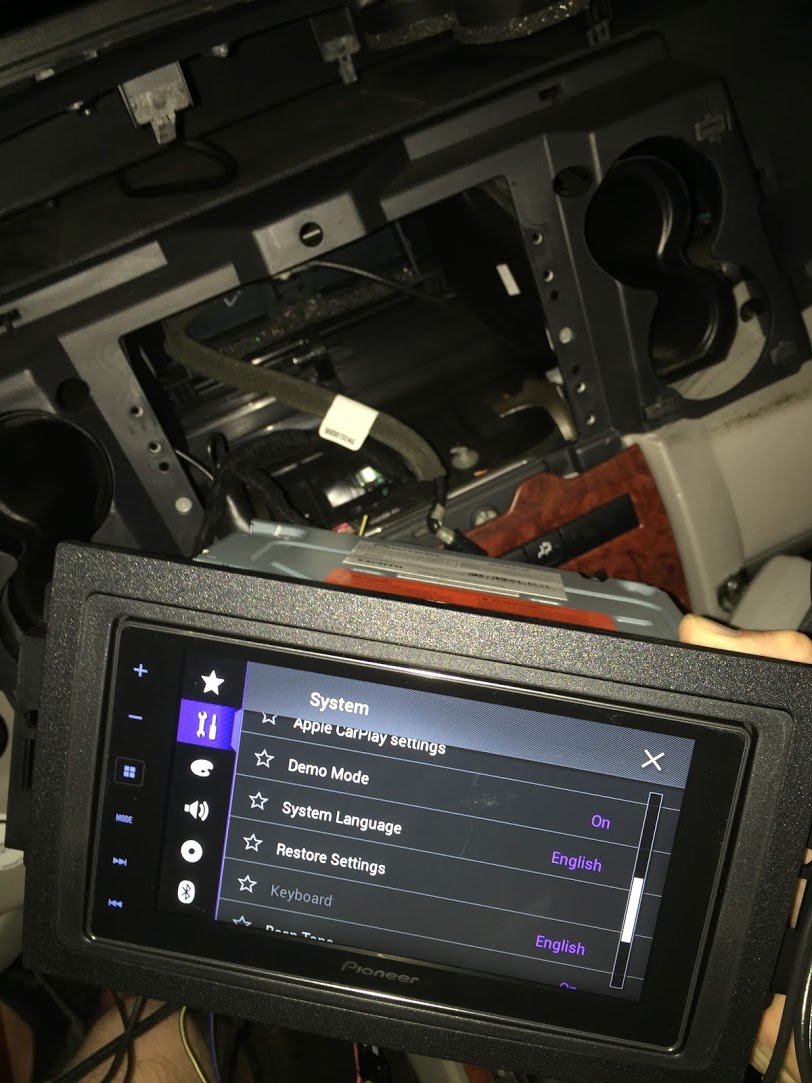 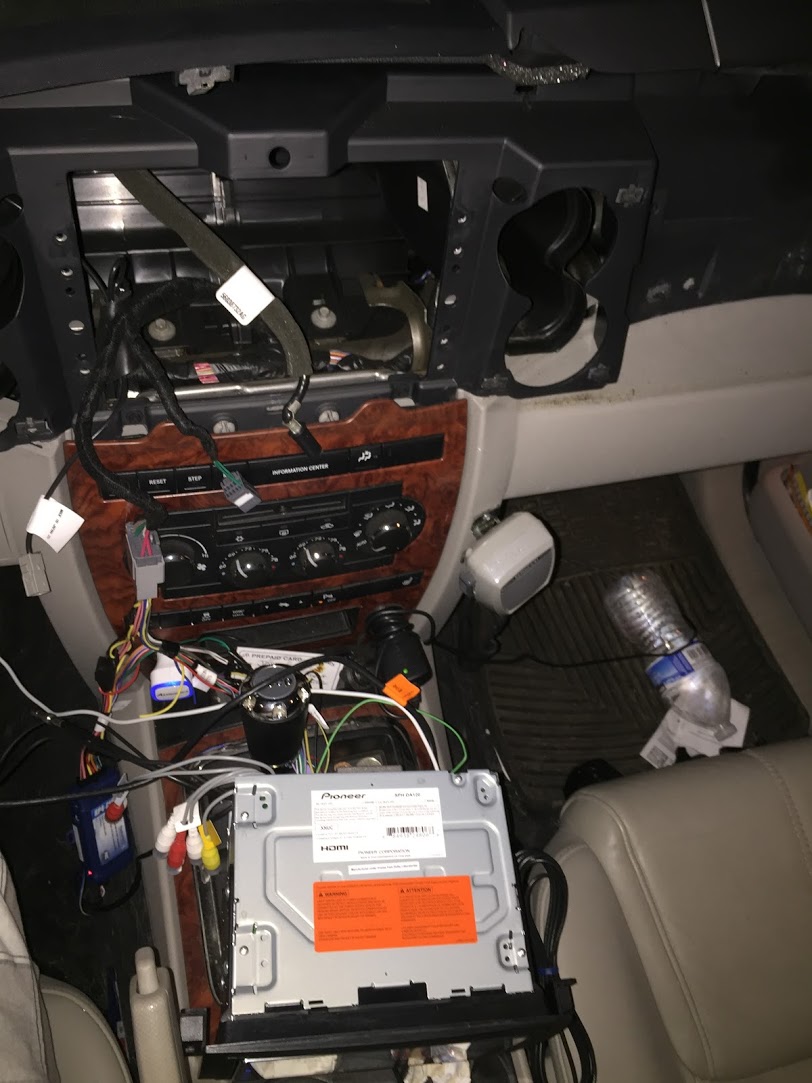 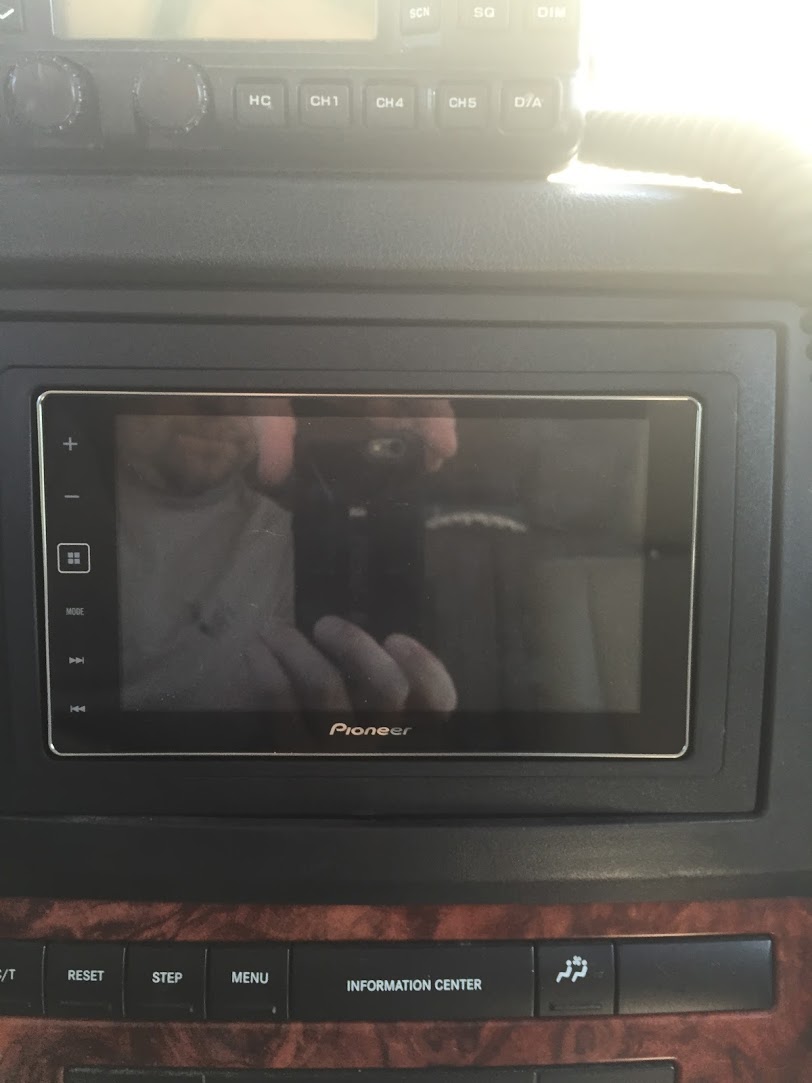 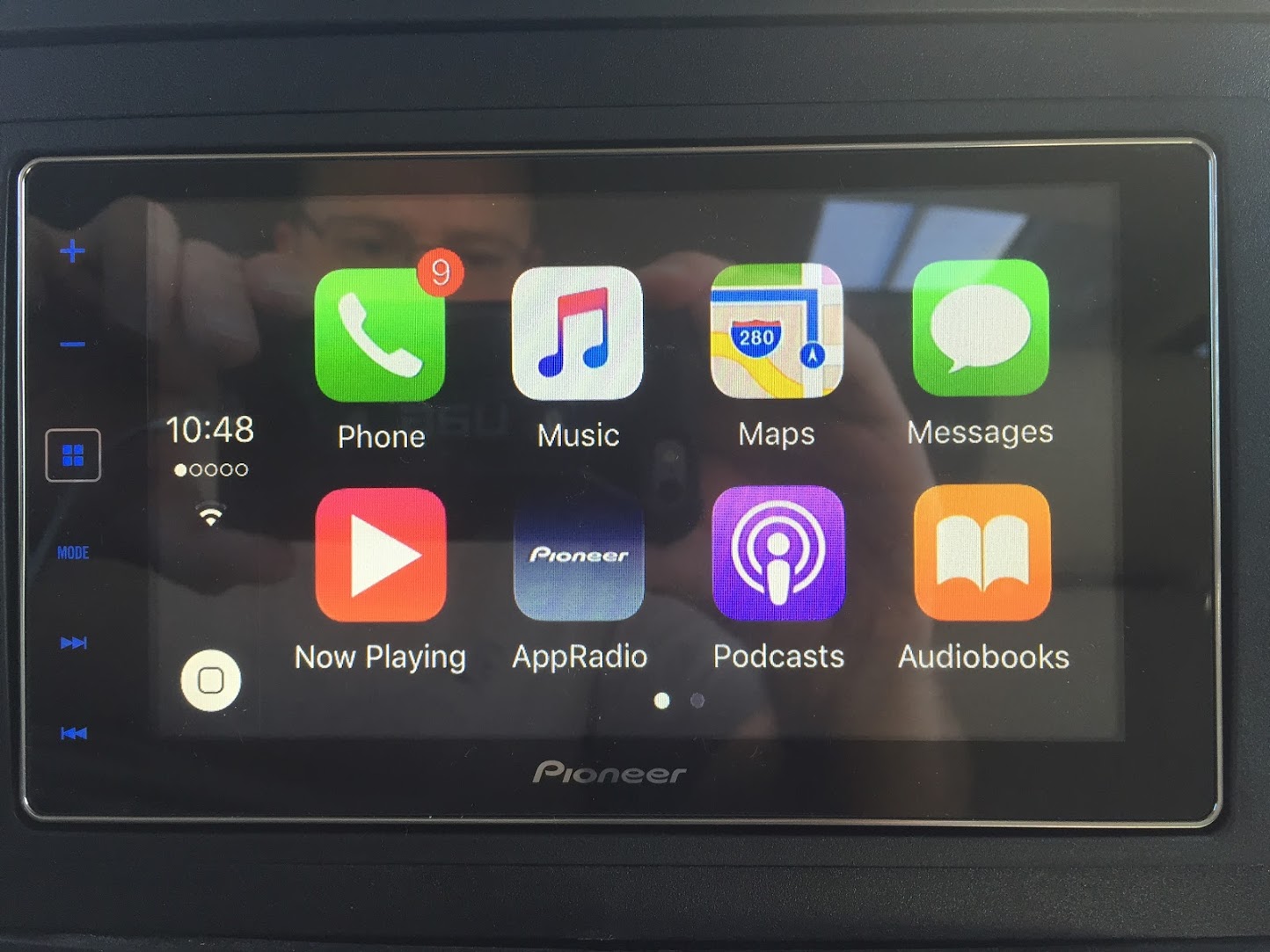 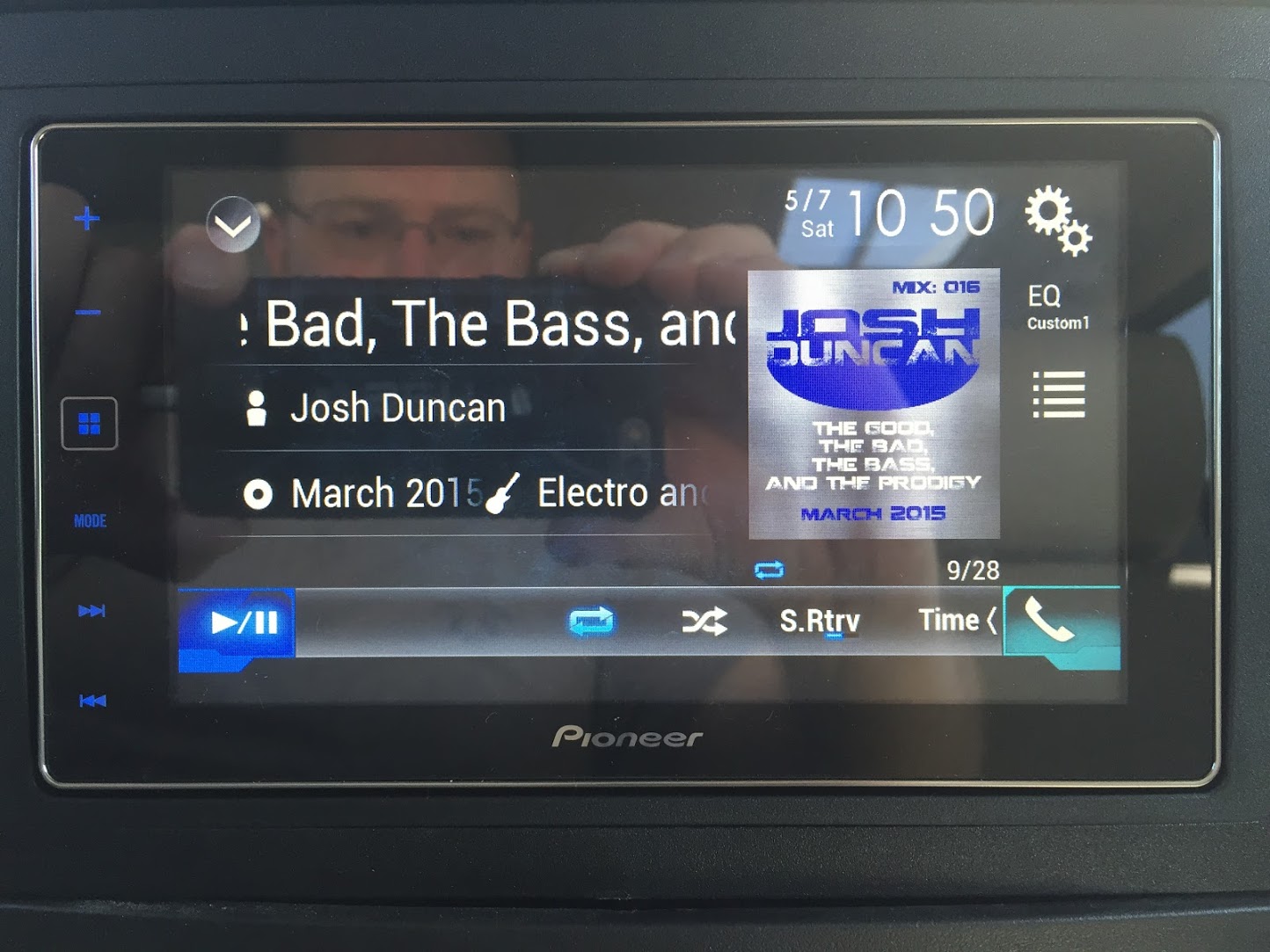 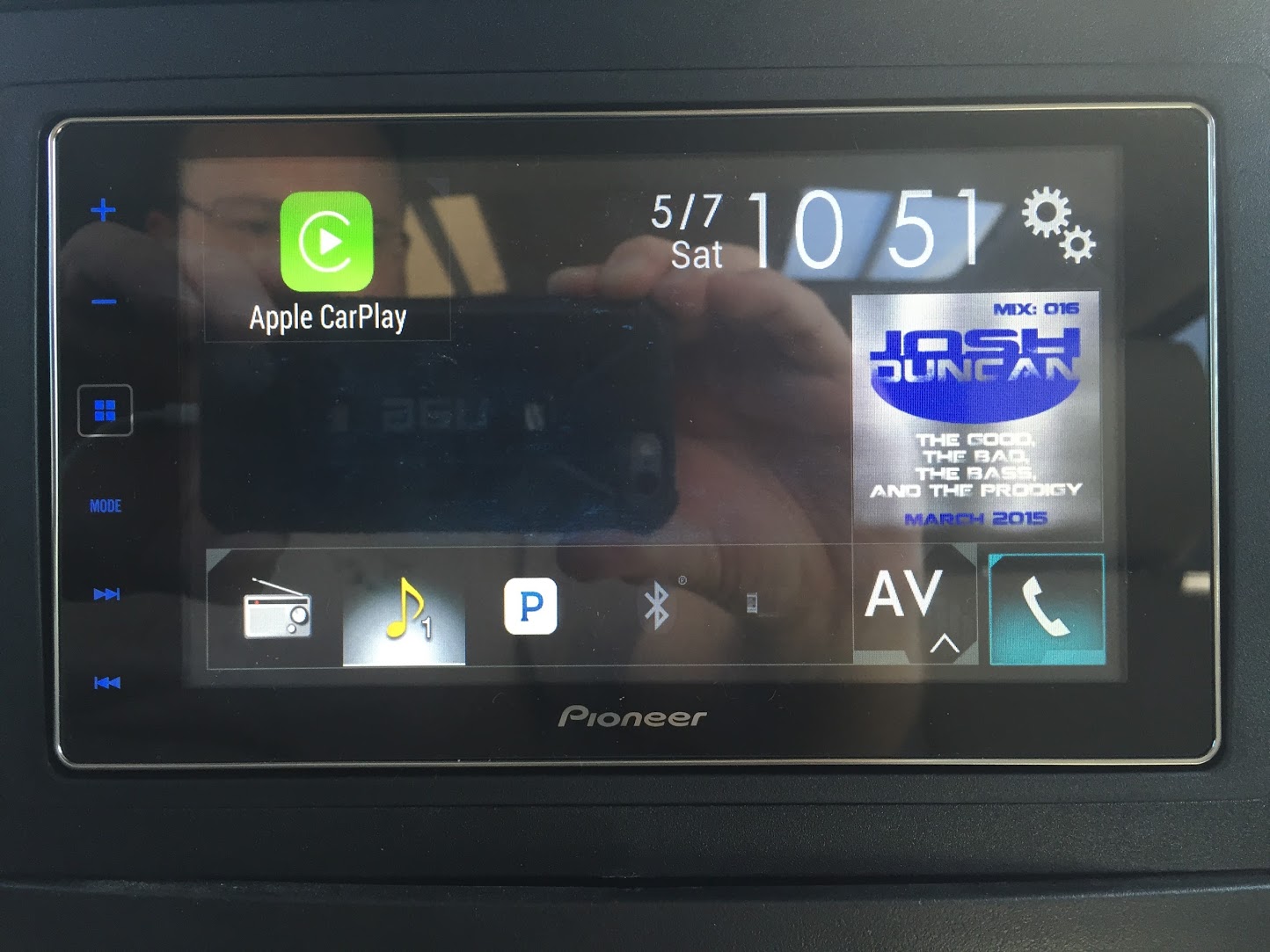 That's really cool. Commanders are really cool vehicles. Love that head unit too. Hey did all your interior door handles break at some point? My brother's have.