In March the wife and I are dropping the kids off at grandma's and taking off for 4 days of camping and adventure. The first child free trip since our daughter was born in October. We're not making many hard plans, we have a couple of things to see but not real plans, we're going to let the adventure take use where it may. So far we are planning on the first evening in Port Angeles and the hitting Cape Flattery the next day. Besides that no plans. Anyone have any Olympic peninsula suggestions?
Reactions: Z_Shealy and RescueRangers

Not much help here, its on our wish list but that isn't for another couple years. Please do some postings when you get back.

We loved Cape Flattery! We spent two days exploring out of Sequim, and four out of Forks. I imagine the weather in March will be much different than September, but places we liked were the Hoh rainforest, up the Elwha valley (when we went, they were still cleaning up from having recently removed the dam, but it was still interesting see a river running free for the first time in decades), and Rialto Beach was pretty spectacular out at La Push. (If your wife is a Twilight book or movie fan, Forks and La Push are where it occurred.

If you take the road up Hurricane Ridge, there is a gravel road that leaves the paved road just after you leave the parking lot at the top. Take it, and you'll go over some spectacular scenic areas until you reach Obstruction Point. Well worth the trip. That's where this was taken. You can see the road in the distance. 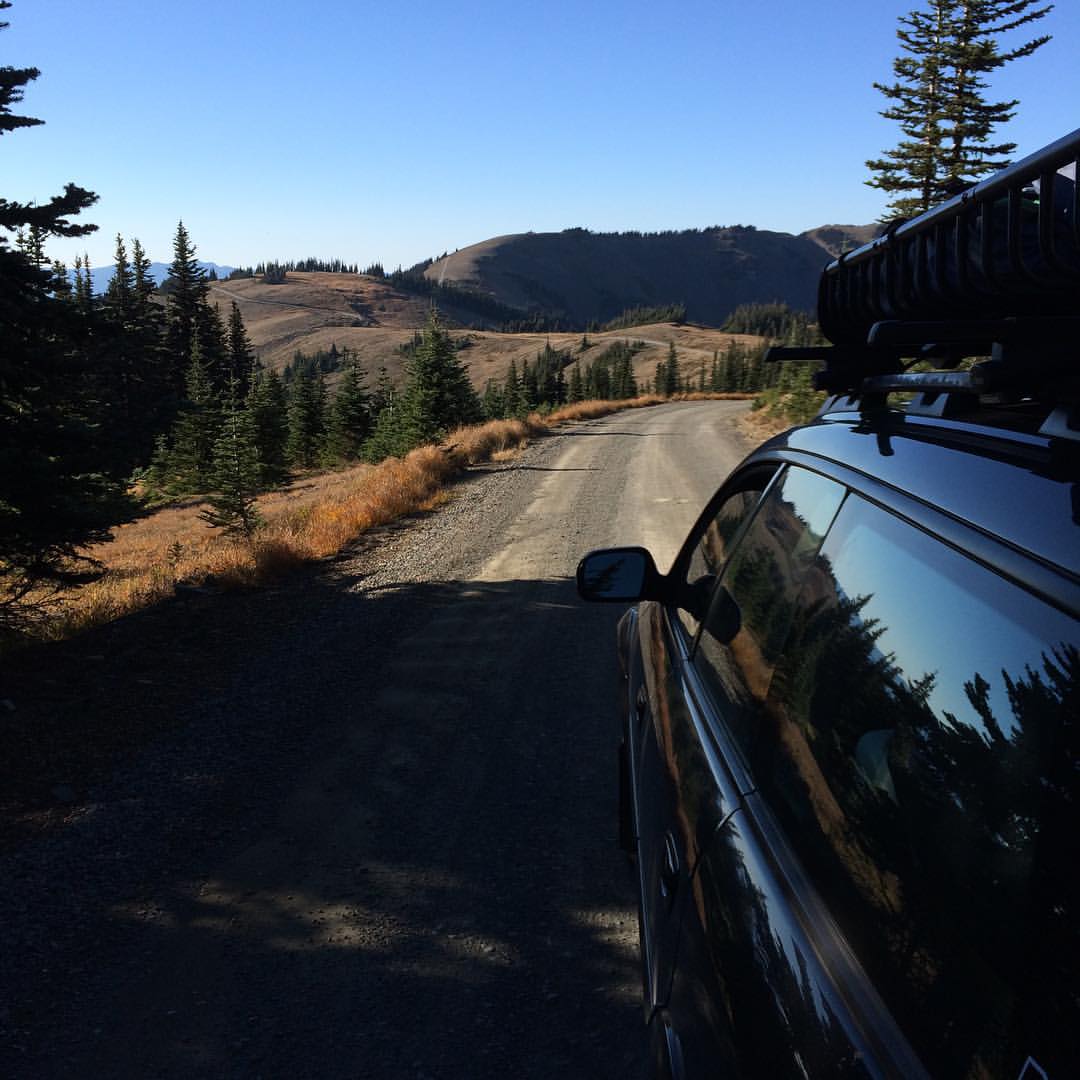 If you want to splurge on an expensive, but outrageously good dinner, get the king salmon at Michael's Seafood in Port Angeles. The only salmon I had that I like more was in Astoria, Oregon. 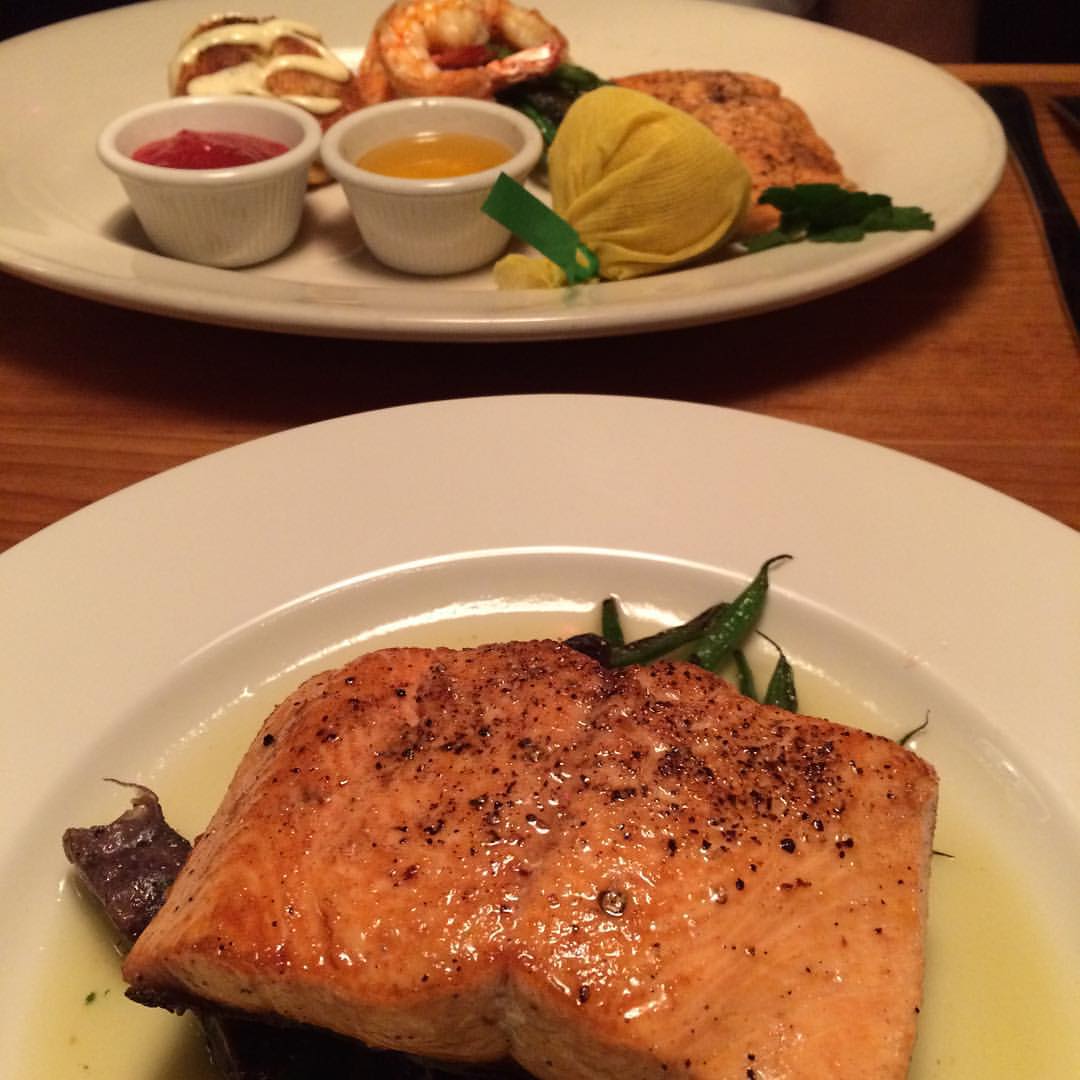 @Steve thanks for the input! We might go to hurricane ridge, we've been before but its beautiful, this time of year the gravel road you speak of is snowed in, which is one of the challenges of this trip, this time of year both of Washingtons mountain ranges hold snow after a certain elevation, our other challenge is that we are taking our dogs and most of Olympic National Parks' hiking trails are closed to dogs. Hoh River rain forest is on the list of possibilities for sure though. Thankfully my wife won't subject me to twilight themed trips. @RescueRangers ill post a trip report, I promise.

If you go to Hoh, stop at Peak 6 Tours and Gift Shop on your left at 4883 Upper Hoh Road. It has some great buys on good quality stuff. My wife bought a water resistant fleece lined hooded jacket for $39, and their t-shirts were pretty inexpensive, too. Talk to the older lady that runs the place if she's there. She is a retired mathematician at some prestigious college, and her husband was some distinguished professor. He wrote a book with his sister, who is also some doctorate. Smart people in rewarding retirement jobs. They have a mail drop there for one of the guys that's apparently famous on a reality show for living off the land in the forest there.

I doubt they are back open yet, but on the north side of the park on 101 between the Elwha and Lake Sutherland is a great little eatery called Granny's Cafe. Be sure to stop, and save room for pie. They bake a whole pie about 6" diameter to split, with ice cream and whipped cream. Absolutely yummy! It was some local berry when we were there in September.
Reactions: Z_Shealy

@Steve, you are a wealth of info! I love the recommendations for food and souviners! You're a pro!
Reactions: Steve

I'm always looking for a local place to eat that's not inundated by tourists. :)

Earlier this week we completed our mini Olympic Peninsula trip and we had a blast! Our original 4 day trip ended up just being 2 days, one night but it was still great. We drove over to Port Angeles on the northern end of the Olympic Peninsula, stopped in at the Olympic National Park ranger station there for some info. The road to hurricane ridge is only open on weekends right now and only one loop of the heart of the hills camp ground was open so we took a gravel road short cut over to Madison Creek Falls. Our daughter is named Madison, and it's a short hike you can take your dogs on and ours needed to stretch their legs. After seeing the falls we drove over to Salt Creek Rec area, it's a county owned park just west of Port Angeles. It used to be called Camp Hayden and was part of the coastal defenses of the Piget Sound for WWII. There were 2 16" guns installed there, now you can drive your rig right where the guns used to be. There is camping, a play ground, and great access to the water, bluffs, tide pools, etc. it's a beautiful park and was a great place to camp. Even the view from our camp site was great. We drove south the Lake Crescent, a big beautiful lake set into the Olympic Mountains. We took pavemeant south to the lake, drove east a bit and took a great forest road back north. There was a lot to explore off the forest road that we didn't touch, and a few opportunities to use the 4wd and suspension of my Jeep! The next morning a zipper on the rain fly of my North a face ground temp broke. The zipper truck its self broke into multiple pieces. We figured we would just safety pin it back together for the night and be ok. This will play a bigger part in our trip,than we thought. After breaking camp we headed out to Cape Flattery, the most Northwestern point of the continental United States. The road out there from Salt Creek rec area is state highway 112. Although it's a state highway, it's not what you'd expect. It's narrow and winding with lots of hills. I wished I'd been driving my little A4 and not my Jeep! My wife was getting a bit motion sick as it was though. Highway 112 ends in Neah Bay, the main town of the Makah Reservation. To go out to Cape Flattery you need to buy a $10 rec permit. It's good for a year. The tribe could use the money and the views are worth it so I have no issue shelling out $10 for it. The hike from the parking lot is short and easy. A lot of it is on boardwalk. We took our dogs, but I wouldn't take them again, they kept sticking a back paw between the cracks in the boardwalk and we were a bit concerned they'd break a leg. Besides being the Northwest point of the continental United States, Cape Flattery is breathtaking. The weather and the sea have shaped the land dramatically. It's a must see, one of those places that shows up on Instagram and Tumblr a lot. After Cape Flatery we headed south to Ruby Beach. Ruby Beach is another beautiful spot seen on Instagram a lot. The weather had turned while we were at Cape Flattery, the wind and rain were only worse as Ruby Beach, but it added to the views. The weather shaped the place, seems fitting to see it as a storm roles in. From Ruby beach we headed south to Kalaloch where we were to camp for the night. After arriving at the campground we checked the weather, the storm was only to get worse, and decided not to camp out in a storm with a bad zipper on the rain fly. We were left and were home in 4 hours. Although at the time is felt like we were giving up, it turned out to be a pretty decent storm with some campgrounds on the coast flooding. All in all we were away from home for about 36 hours and had a great time. We saw some cool things, had a ton of fun and since we left the kids with the in-laws we were able to relax and just enjoy being a couple. It was a great trip. We are planning another trip for the summer when more of the park is open. We'll bring the kids but leave our dogs so we can do some more hiking in the National Park.

The scenic route back to camp.

Great shots...I really need to spend some time up there.

It was a great trip. It makes us want to spend more time up there. We live so close to the Cascades that we forget about the Olympics.