Anyone looking for info on the WABDR or want to share their WABDR trip please post up. 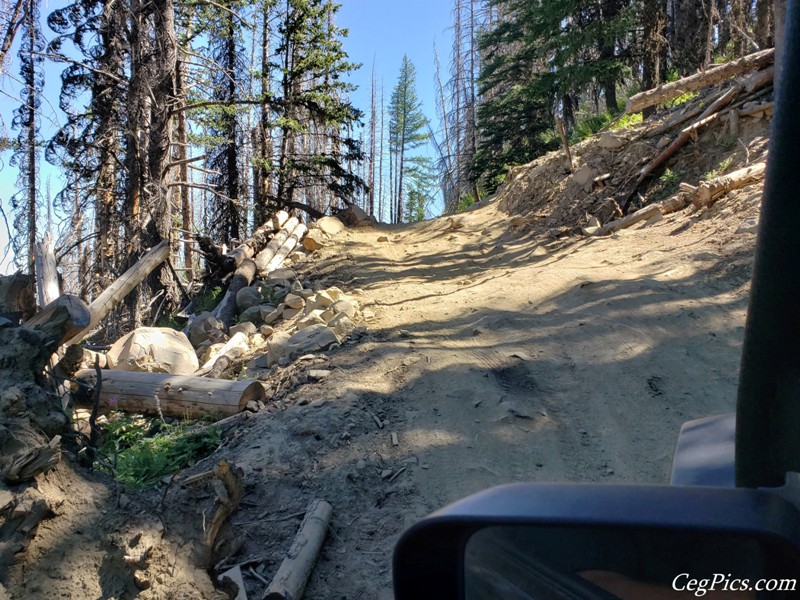 "The Washout in Section 3".

Part of the WABDR was closed this summer on Washington State Department of Natural Resources (DNR) due to the Public Land Commissioner gave the order to keep the public out in case the the public set it on fire. Well it is back open as of today. The Bethel Ridge Section is still closed due to the Schneider Springs fire.

The eight-week closure was enacted July 23 amid historic heat and drought conditions, extreme wildfire danger, and a spate of large fires burning across the West that stretched wildfire resources thin. January through April this year ranked in the driest 10 percent of years since 1894 for areas on the eastern side of the state, which left fuels bone dry and resulted in a new record of more than 220 fires in the month of April.

At the time of the closure, the number of fire ignitions in the state was approximately double the 10-year average.

Since the closure eight weeks ago, conditions have improved thanks to the tireless efforts of firefighters, an expanded air fleet, and a tactical focus on initial attack, which has allowed DNR to respond to fires quickly and keep them from spreading. More than 98 percent of DNR fires were caught during the initial attack this fire season, and more than 93 percent of DNR fires were stopped at 10 acres or less, which is better than the 10-year average by six percentage points.

“After months of moving from fire to fire, we are optimistic that we have turned a corner,” said Franz, the elected official who oversees DNR. “Our ability to reopen public lands in eastern Washington is a testament to the trust and teamwork between firefighters and the public. I am extraordinarily grateful to everyone who complied with this closure for sharing in the sacrifice necessary to prevent wildfires.

“Together, we were able to turn a moment of crisis into a shared call to action and avert tragedy this summer.”

To date, Washington has faced approximately 1,750 fires statewide this year, which have burned more than 650,000 acres—significantly less than last year.

A variety of factors played into the decision to reopen DNR-managed lands, including the Industrial Fire Precaution Levels ratings, national and local preparedness levels, moisture of both fine and heavy fuels, and the 10-day weather forecast and rain totals across the state.

“We are excited to reopen state lands for hunters and other recreationists,” said Laurie Benson, DNR’s acting Conservation, Recreation, and Transactions division manager. “We ask that everyone who goes out to enjoy these lands continues to be safe and responsible.”

The reopening of DNR-managed lands does not affect the ongoing statewide burn ban, currently set to expire on September 30. The burn ban, enacted July 1, remains in effect, as more than three-quarters of Washington state remains in drought conditions.

MEDIA: Press conference video is available to download for broadcast use HERE.

The Bethel Ridge area of WABDR Section 2 is closed due to the Schneider Springs Fire.

A lightning storm blanketed the northern Cascade Mountain Range on the evening August 4 igniting a fire in the Schneider Springs area of the Naches Ranger District approximately 20 miles northwest of Naches, WA. The fire grew quickly in the next several days in record hot and dry conditions, burning in heavy timber, standing dead trees, and very steep terrain that was difficult for ground resources to access.

The fire is now burning on the Okanogan-Wenatchee National Forest and lands managed by the Washington Department of Natural Resources. There is a temporary area closure in place for public and state lands in and around the fire area. Northwest Team 10 assumed command of the Schneider Springs Fire as of September 11, 2021.

The Schneider Springs Fire is being managed under a full suppression strategy. Firefighters and suppression resources will shift around the fire perimeter to protect communities and take actions with the highest probability of success.
You must log in or register to reply here.
Share:
Facebook Twitter Reddit Pinterest Tumblr WhatsApp Email Link
Top Bottom