So I took my 12 yr old on a semi spur-of-the-moment trip out to the bush. We took the small tent for the 2 of us… but with her hand in a cast, my back being sore, and the forecast for rain the following day I decided that we would just sleep in the FJ. The temperature was going to get below freezing and I had been meaning to pick up some better sleeping bags so we bought a couple that were on sale at Cabela’s… good for -18 (0 F).

I bought a few packs of hotdogs, freeze dried meals from Mountain House, twinkies (I never buy this crap but I figured my kid would get a kick out of it as a treat), and some Gatorade.

There were fire and travel bans in my province so we had to head one province over where there was only a fire ban.

Basically it was one of those trips that you know it’s not the best time to go because of the pile of reasons not to go (crap weather, kid’s hand in a cast, fire bans, deep bush by ourselves and likely going to be using a chainsaw and guns, lol)… but cabin fever dictated otherwise and I made a promise to my little girl, lol.

It took us about 5 hrs to get in the bush and away from civilization. I took my girl for a little quad ride and she got pretty cold pretty quick (exposed thumb on the hand that was in a cast) so we shut that down for the evening. The bad thing about having good weather in the spring is when the weather turns crappy you don’t dress for it like you should.

No big trees down across the path… what trees that were on the path were small enough to go over. So I didn’t have to use my chainsaw… which speeds things up. If you have to start clearing the path it takes that much longer to get in to our spot.

So we started our movie that much sooner… since we couldn’t sit around a fire and it started to snow, lol. I had brought the laptop and had a couple X-Men movies put onto it.

It was kinda neat having a movie night on the beach in the FJ.

While watching the movies we heard a little critter running around on the roof of the FJ… or at least it sounded like it. No biggie…

We actually stayed up pretty late and shut things down around 0130.

So I’m tossing and turning a bit, listening to the critter on the roof every once in a while… then I hear some rustling in the FJ. I figure it’s my girls leg against the little garbage bag that I had hanging off my xfer case shifter… no biggie.

Critter above running back and forth the length of the FJ… sounded like the little bugger was actually IN my headliner at one point… I heard some rustling right in the centre. Hmmm. I press up on the headliner, nothing. No noise or anything out of the ordinary.

Then I hear the rustling down by the garbage bag again so I put my handy little headlamp on my head and turn it on and look around… pushing her sleeping bag away from the garbage bag to investigate… nothing… I push her sleeping bag along the seat-back to look behind her seat and a friggin mouse jumps up onto my centre console and looks at me. I look at him. Then I try to bash his brains in with my bare hand. Of course my lightning fast reflexes at what’s now 0315 hrs didn’t accomplish jack.

Now I’m awake. I know I’m not likely going to get any more sleep with a mouse running around and quite likely ON me and my girl.

Screw it… it’s going to rain soon anyway…. Pulled the pin and decided to break camp.

Luckily we didn’t set up our camp extensively like we normally do so it was pretty quick to break camp. I just had to load the 1 quad back up, strap it down, and tidy up the FJ for driving.

On the way back out of the bush I almost had to winch in one spot. On the way in it was downhill so gravity helped a bit, but this time it was uphill, loose sand, washed out, off-camber, and towing the 2 quads.

With the rear locked and a-trac on so I didn’t dig down too far… I finally made it through after getting “stuck” about 4 times…. A little backing up to get out of each hole I dug and then giving ‘er again did the trick. My girl, who is normally fearless, was a little concerned at the angle the FJ was sitting at going through there.

So now I have 2 mouse traps in the FJ… and I bought one of those sonic mouse deterrents for the garage. I’m still not sure if the mouse I heard on the roof(?) was one and the same as the one in the FJ I saw. And did the mouse get in the FJ while it was in the garage or did it come into the FJ when we were sitting in it blasting movies all night?? We had all kinds of food and used food wrappers stinking up the FJ so I’m not sure. I’m leaning more towards it getting in there when it was sitting in the garage.

All in all… I still had a good time with my kid and it was a small mini-adventure for her. 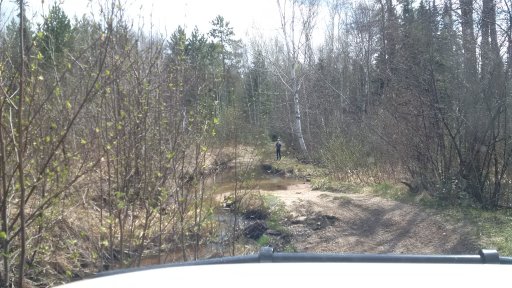 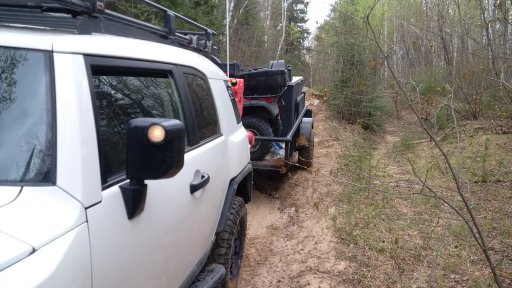 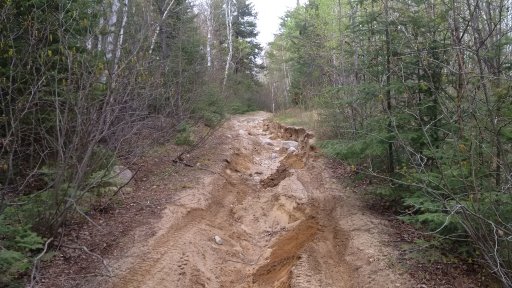 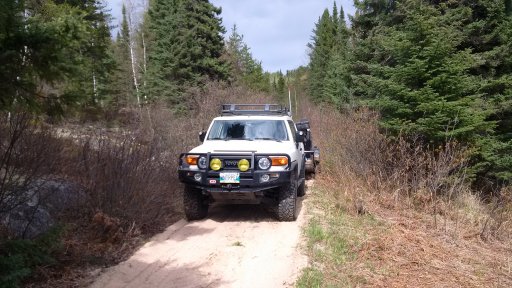 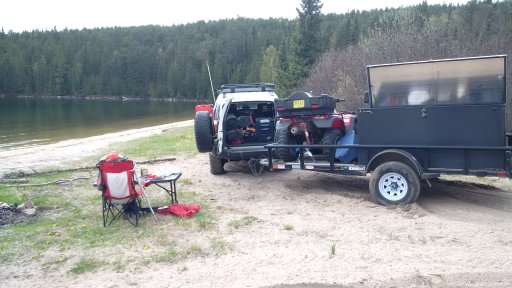 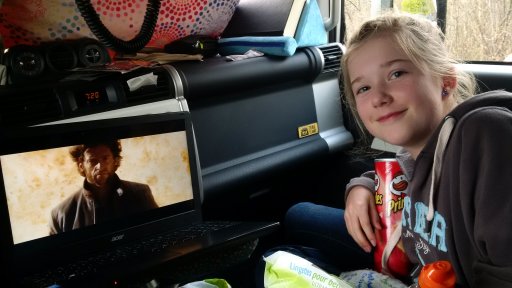 Here are a few very boring driving videos to give you an idea of the trail and the scraping involved. Full disclosure in case anyone wants to head out there ;)

Sounds and looks like it was a blast, At least your daughter is all smiles. Hope you get the critter!!!!!
Reactions: Winterpeg

Sounds like a memorable trip! Anytime you can head out into the wilderness and come back with no vehicle damage and no injuries/illnesses is a good trip!

Maybe I should mention here that taking a trailer through trails like this up and over rocks can be hard on a trailer axle. I've had to replace mine. I beefed it up from the 3500 lb axle to a 6000lb one.
Granted I had a fair bit of weight on the trailer but I believe I was still originally under the 3500 lb limit.
What probably didn't help was me flipping the axle over to have the springs on top of the axle to give me more clearance. Evidently that puts the natural bend in the axle the opposite way, which could reduce its strength from what I was told.

A trip with smiles is what it's about!!!!!!
Reactions: Luis Merlo and Winterpeg