My wife, daughter, and I will be spending a few days in New Mexico, using Roswell as a base camp (Hotel..) starting next week. Another Ham Radio/overland/rock crawling friend of mine.

I'm not sure who's all in the area, but I'd love to share beers, rig chat and whatever else with the locals if anyone wants to come meet us.

If you're thinking about it, send me a /message and I'll provide my phone number, and likely 2M simplex frequencies you can find me on. :)

I've seen some videos of Jeep Trails through the Lincoln National Forest between Roswell and White Sands. Does anyone here have any suggested trails, and or routes through the forest that might be more fun that just taking the interstate? My second related question is do I need any special kind of OHV sticker for my truck in order to use those trails? If so where's a good place between Tulsa, OK and Roswell to pick them up?

@Lars I just now saw this and your private messages. Sorry, I've been mostly off grid for 13 days!

There are lots of trails through BLM and NFS land on your route. It depends on how direct you want to travel since Roswell to White Sands is a fairly direct route. A good day trip would be to follow this route below. It's about 30% unpaved and 60% of it is backroads on the way out to WSNP, 100% paved on return. If you're going to range out multiple times, I can give you some more routes to try as this is very mild.

The return trip to Roswell will take you near enough to the Valley of Fire if you want to check out the lava fields (15 minutes northwest of Carizozo). It also brings you through Capitan and historical Lincoln (Billy the Kid stomping grounds).

You do not need an OHV permit if you vehicle is licensed to drive on the highway.

Maybe I can sneak away one day this weekend to show you around...

That looks great! Hopefully you can escape. I don't believe we have anything official planned for Saturday. Wednesday is getting to Roswell. Thursday is supposed to be the White Sands trip. Friday Keith wants to head down to Carlsbad I think. Saturday is empty. And Sunday we're heading back toward Austin.
Reactions: Lifestyle Overland

@Lars Heads up if you're going to the Carlsbad Caverns the elevators have been down so plan on getting there early and a steep hike in/out.

**ELEVATOR UPDATE**
Tentative back-in-service date for the elevators is May 31. While the elevators are down, you may walk in/out the Natural Entrance, a steep 750 ft. descent/ascent. Please begin your hike-in by 2 pm to allow time to see the Big Room. Admission fees apply.

Another cool attraction is the Living Desert Zoo. Nothing fancy, but it's cheap and the kids love it.
For local eats try Yellow Brix. We've never had a bad meal there and it's got a lot of outdoor seating.

I'll be sure to share that with the crew tonight. We're in Roswell now. Two long days of driving to get here from Indianapolis, IN.
Thanks for the heads up on the elevator.

The Breakfast Taco, and Wall-E at Carlsbad Caverns National Park. 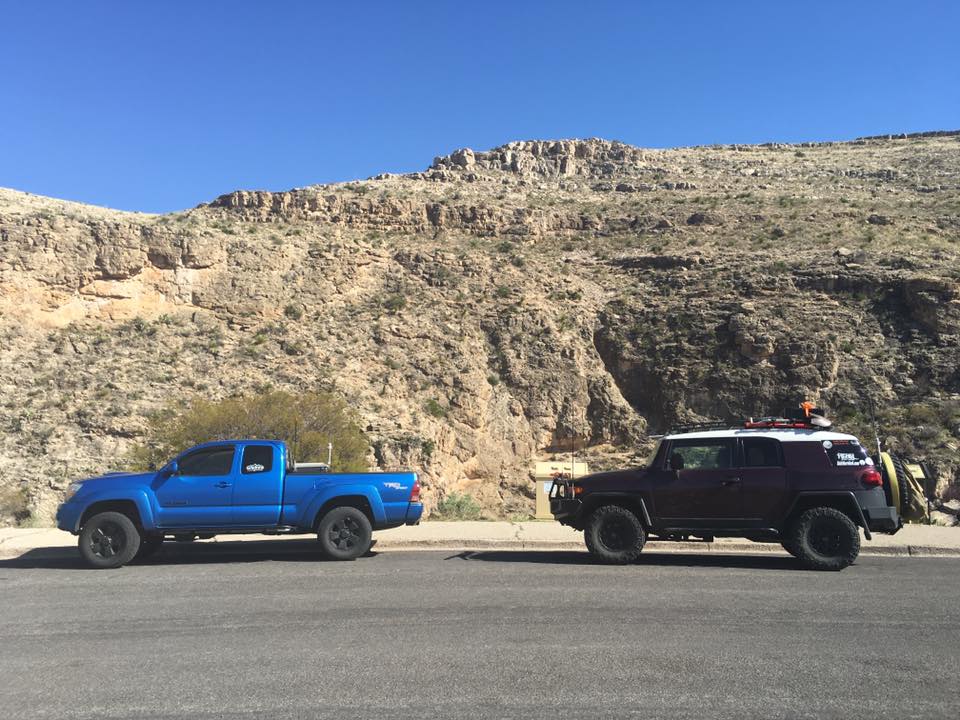 And Upgrading my Patch Collection. 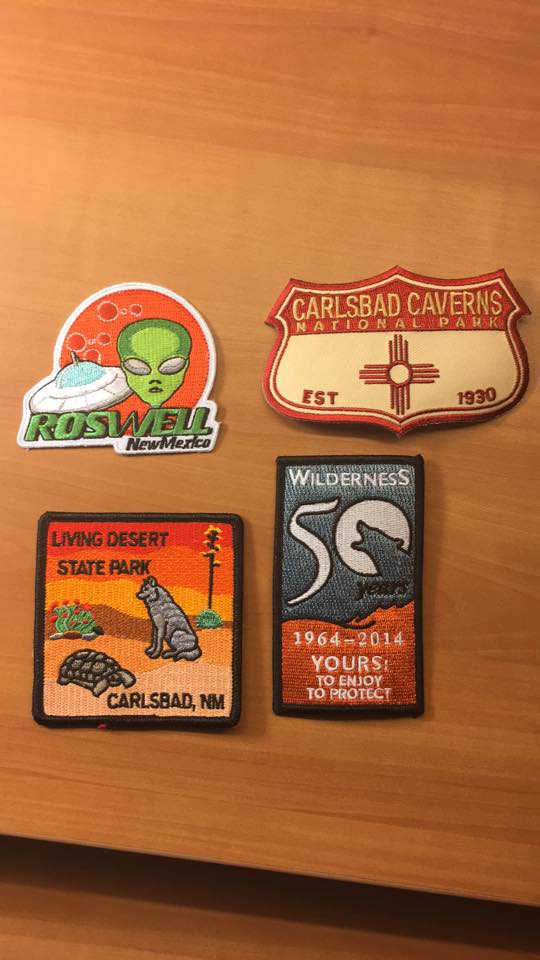 What did you think of Carlsbad?!
Reactions: Lars

Oh, and where did you score the badges?
Reactions: Lars

stringtwelve said:
What did you think of Carlsbad?!
Click to expand...

We went to the visitors center, but didn't climb down into the cave (6 year old would have required me to carry her out.)
The drive up 7 was beautiful, and we stopped several times to take photos.
We really enjoyed the Living Desert. Thank you so much for the suggestion!


stringtwelve said:
Oh, and where did you score the badges?
Click to expand...

The Alien Patch came from the Wal Mart in Roswell honestly.
One of the patches came from the Living Desert park, the other from the gift shop at Carlsbad Caverns.

The one with the wolf actually came from Eagle Creek Park in Indianapolis (We were there on Monday) My wife's cousin is one of the naturalists at that park, and she gave us a personal guided tour through their visitors center. :)
Reactions: Lifestyle Overland

My Transmitter beacons every 2-5 minutes depending on speed, or when my heading changes by more than 14 degrees.
However fine resolution of the path taken also requires a receiver be able to hear my transmission. 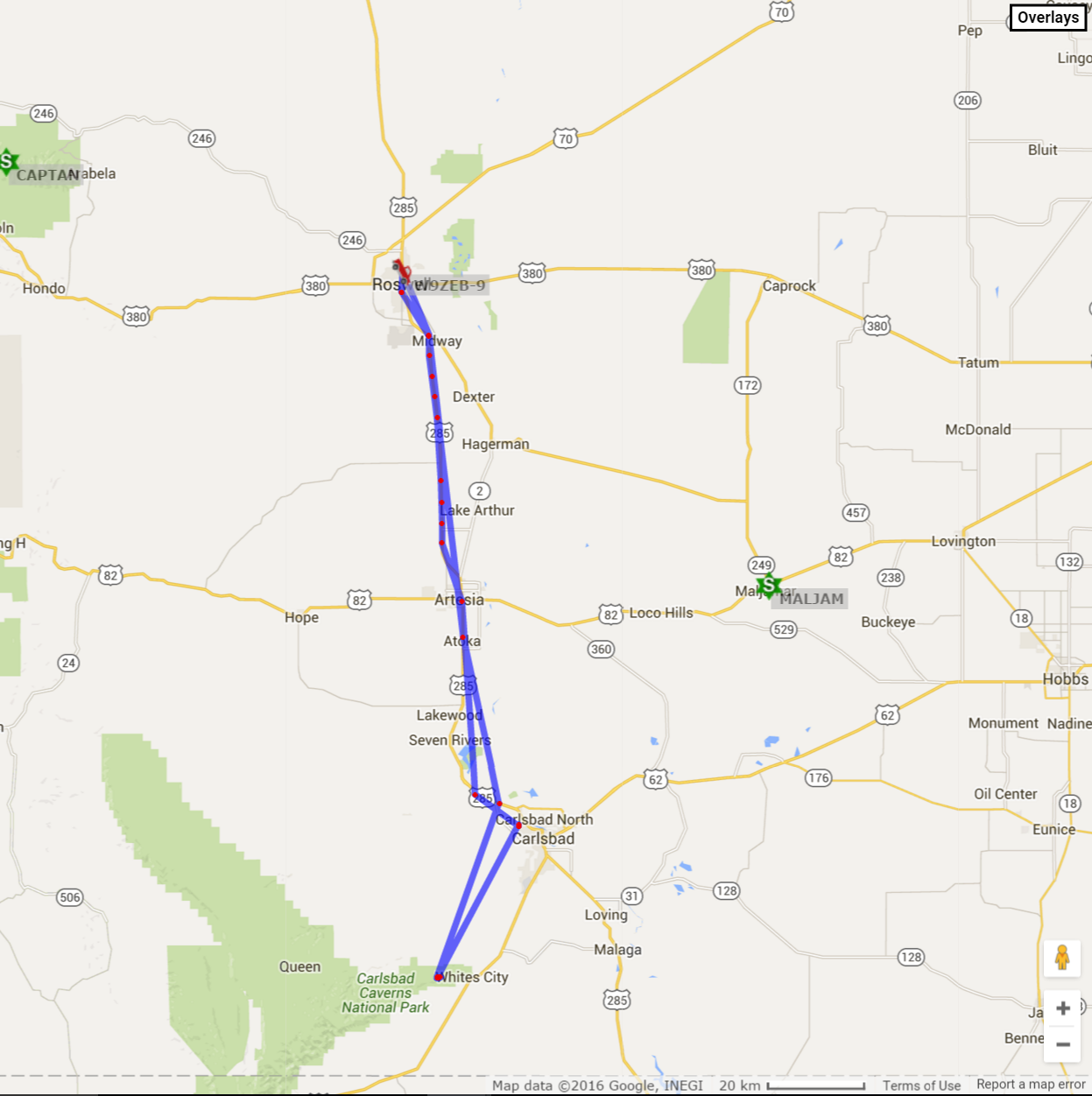 My Daughter is THRILLED to be putting the states from this trip on the map... Can't you tell?
All colored states are from this single trip. 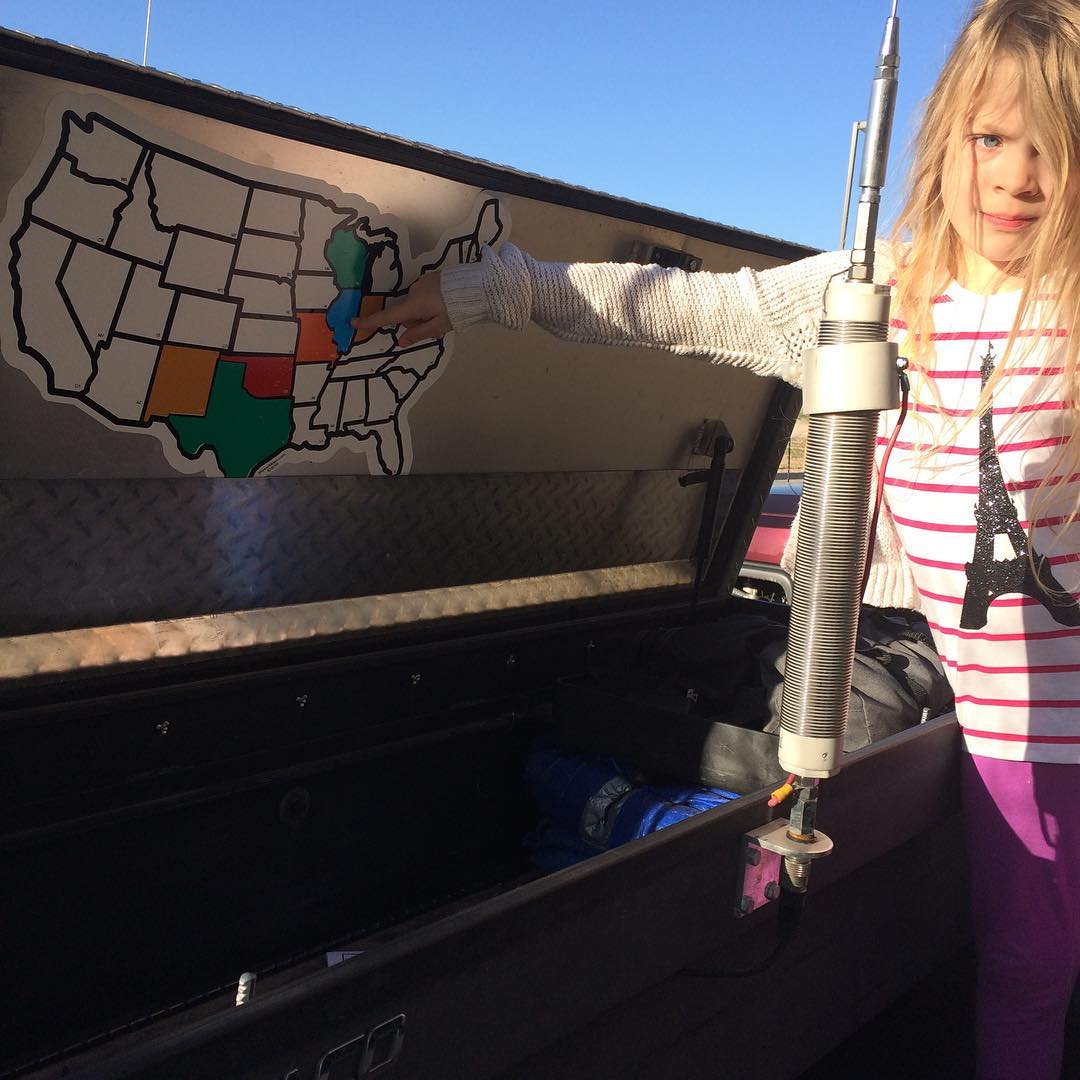 Hey @Lars sorry I didn't get to meet up with you. I came down with the flu (for the 2nd time this year!) on Thursday and have been in bed ever since. Did you guys have a good time?! Anymore pictures?

stringtwelve said:
Hey @Lars sorry I didn't get to meet up with you. I came down with the flu (for the 2nd time this year!) on Thursday and have been in bed ever since. Did you guys have a good time?! Anymore pictures?
Click to expand...

The trip was great overall. I'm working on getting all the photos my wife took pulled together :)
You'll just have to come down to the Lone Star Toyota jamboree in Gilmer, TX in May.... https://www.lonestartoyotajamboree.com/
Reactions: Lifestyle Overland

While we were at White Sands, Keith (Driving Wall-E) and I both tried to activate the White Sands National Monument for the ARRL's National Parks On The Air. Which is an event going on all year to get hams to go to National Parks, and other areas to make contacts at the site. In the first four or five minutes I racked up 5 contacts on 20M upper side band. Keith hadn't made his first contact when a Park Ranger came up and asked if we were using ham radios. She then informed us we weren't allowed to do that due to Hoffman AirForce Base, and the Missile test range. Not being one to argue with Law Enforcement, I shut everything down, 5 contacts shy of getting a cool certificate to hang on my wall. :(

Later research shows there's no indication anywhere that the Park Ranger was correct. So I feel a bit bummed, at the same time I want to avoid popularity with law enforcement. I'll have to activate the Padre Island National Sea Shore this weekend instead :)

Here are some of the photos I took..... My wife has a much nicer album, that she took with a proper dSLR, while these were all iPhone photos. :) 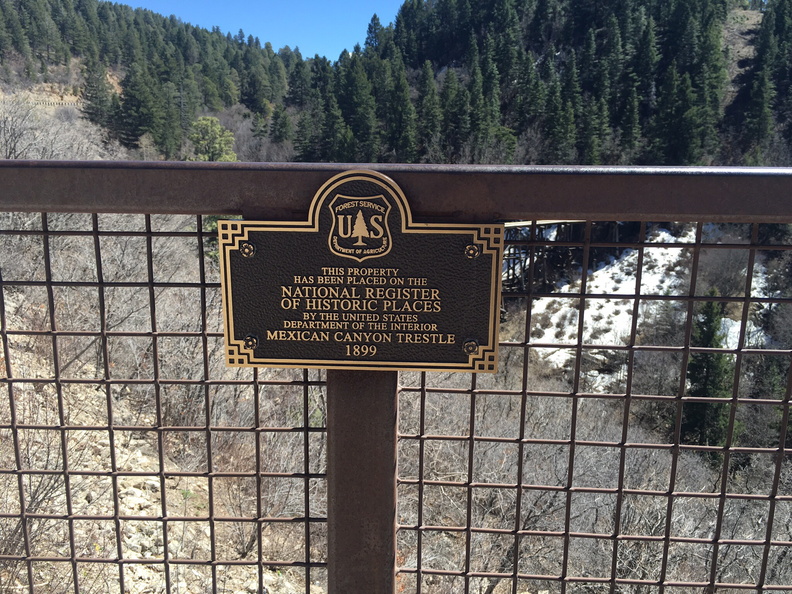 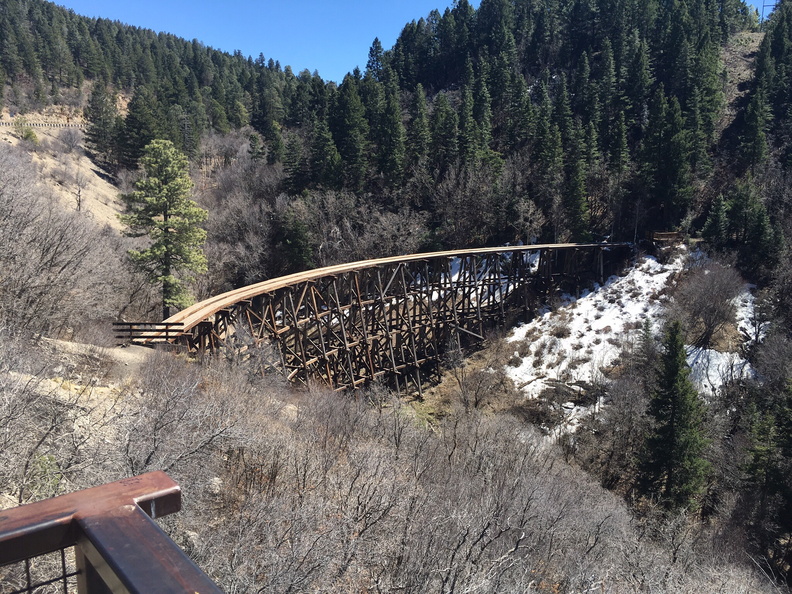 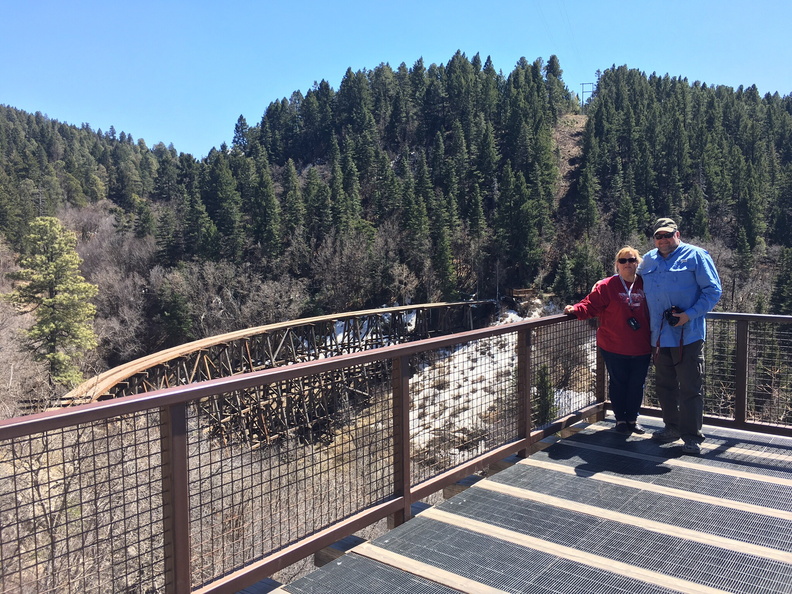 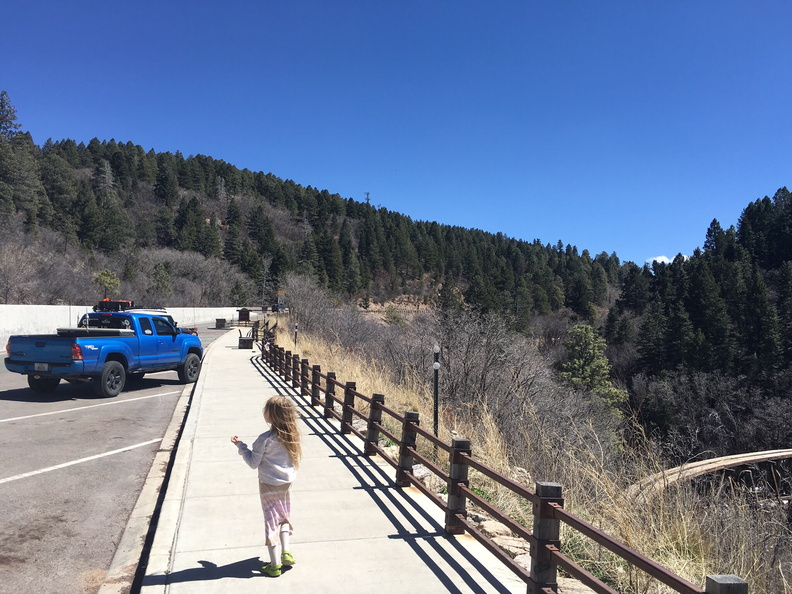 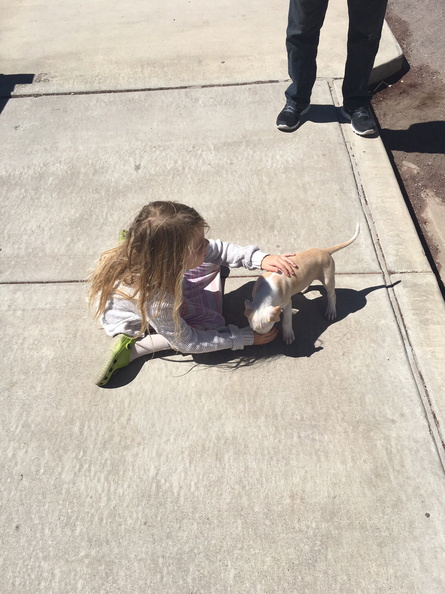 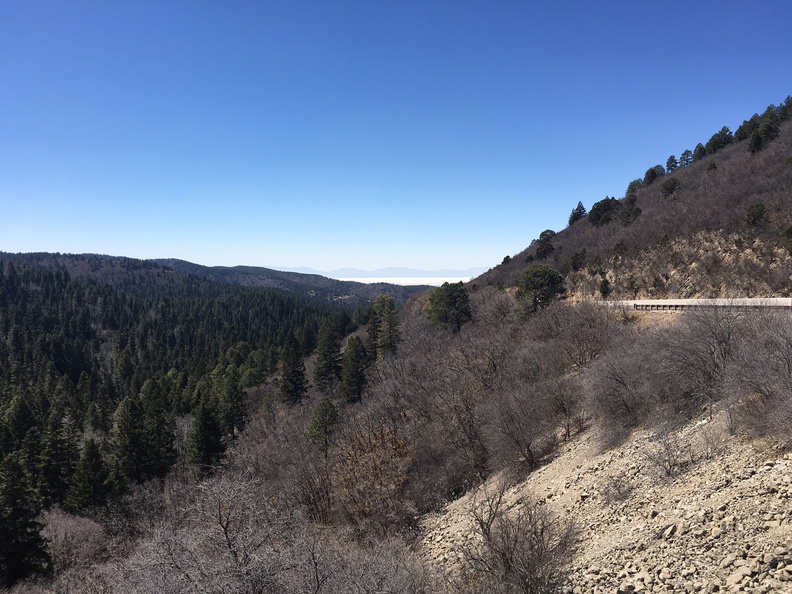 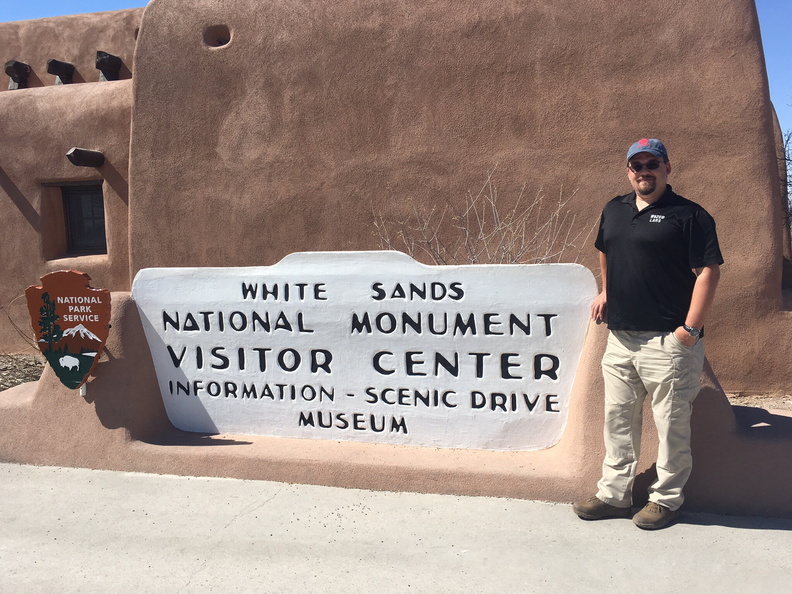 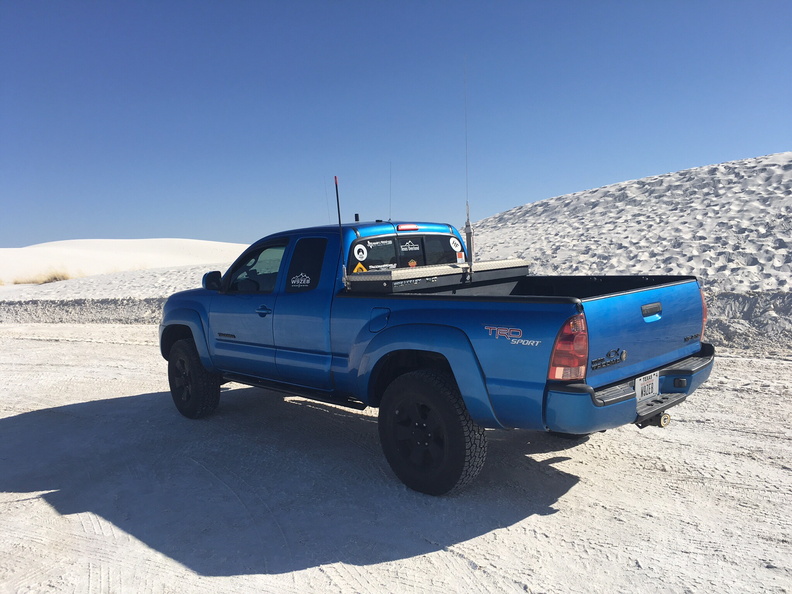 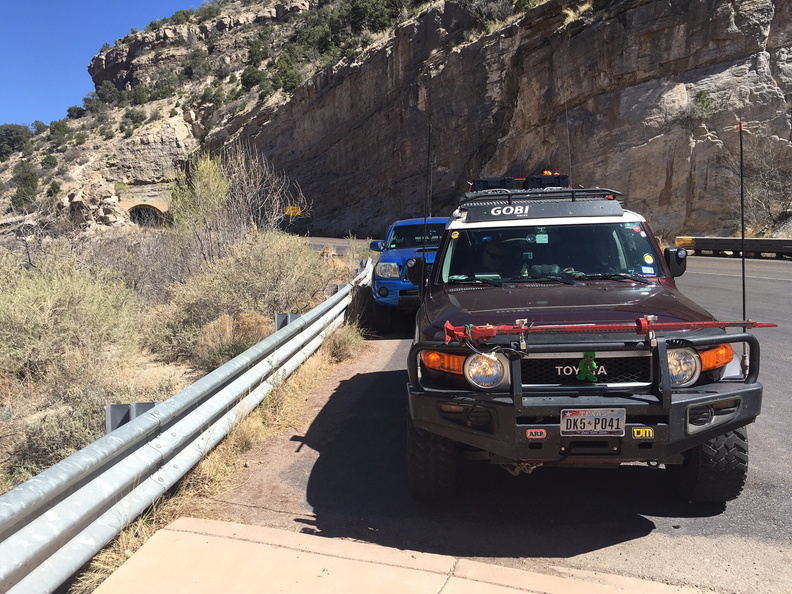 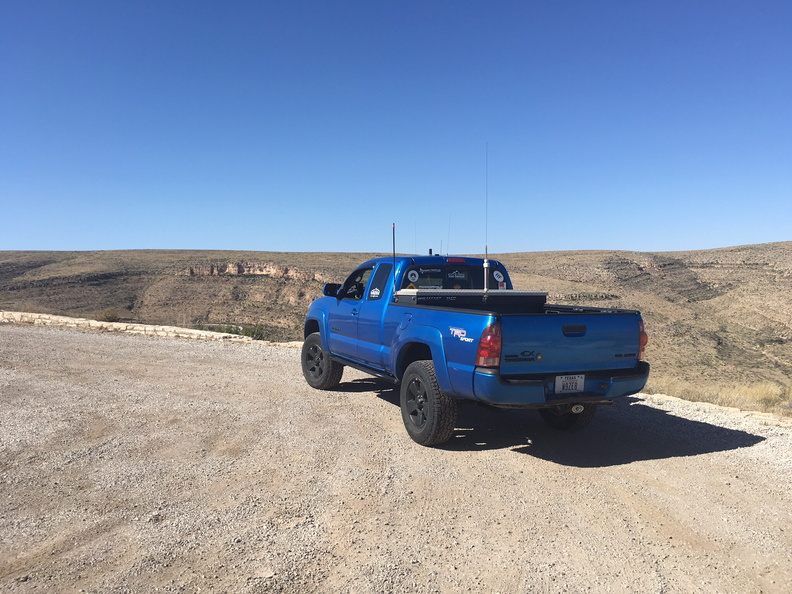 And Some Funny Bits We Saw 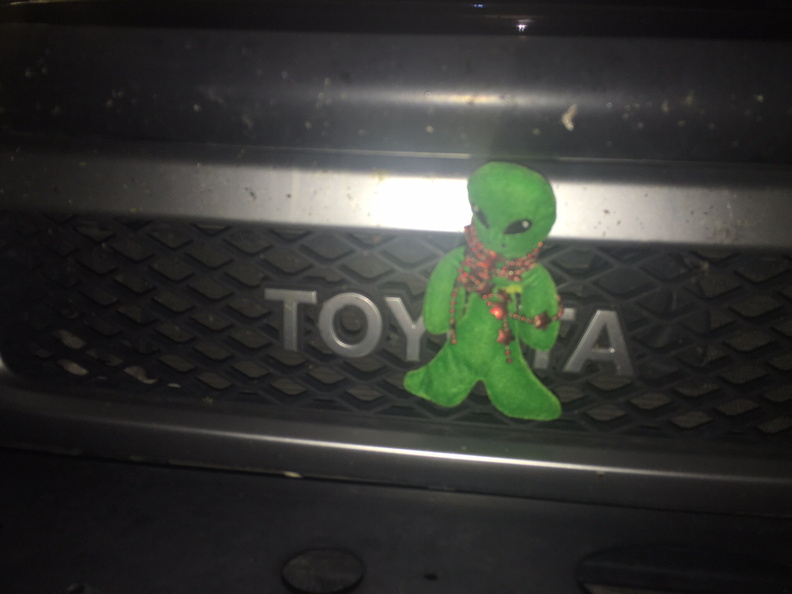 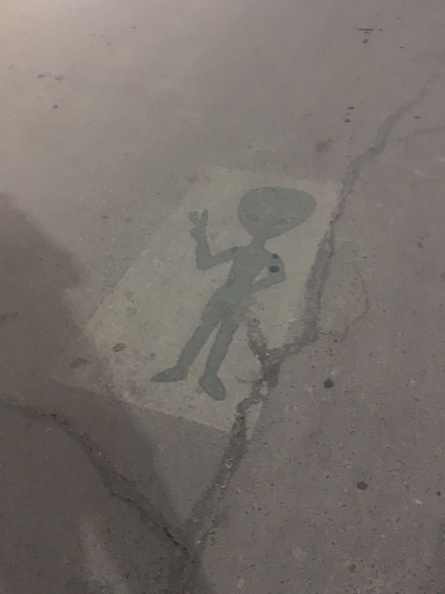 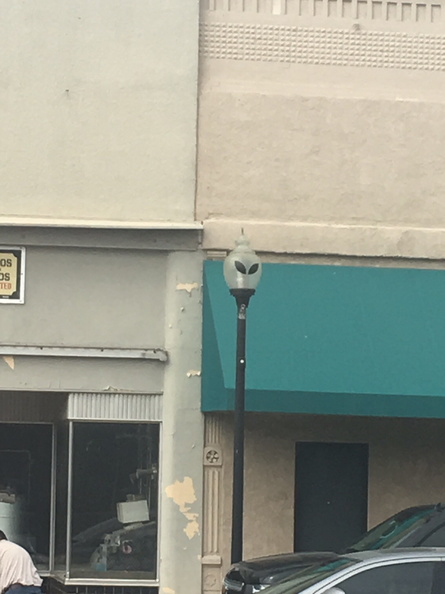 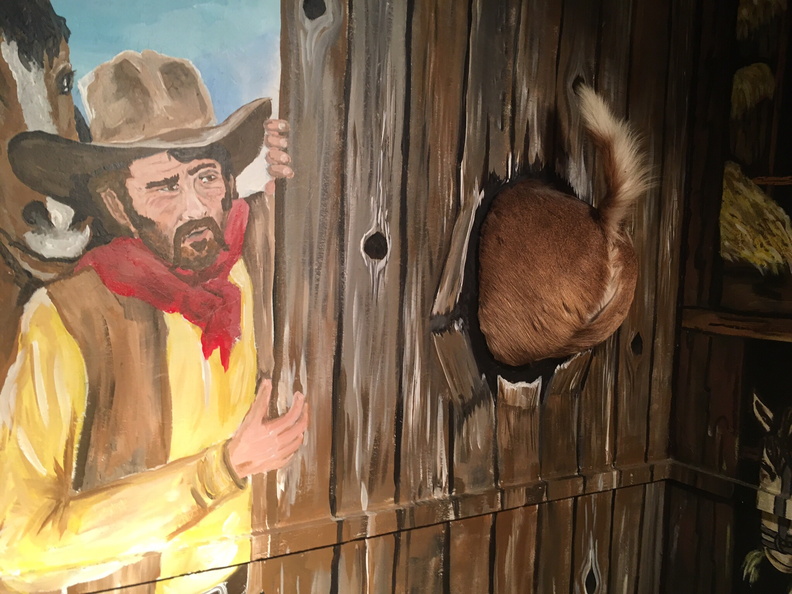 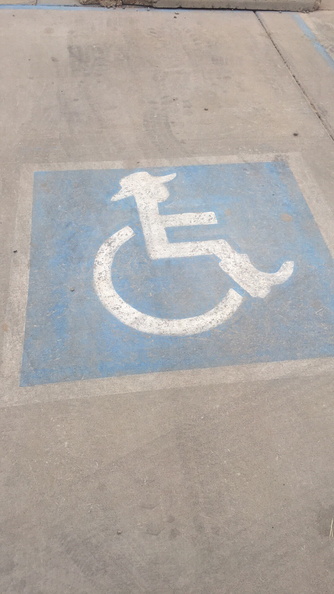 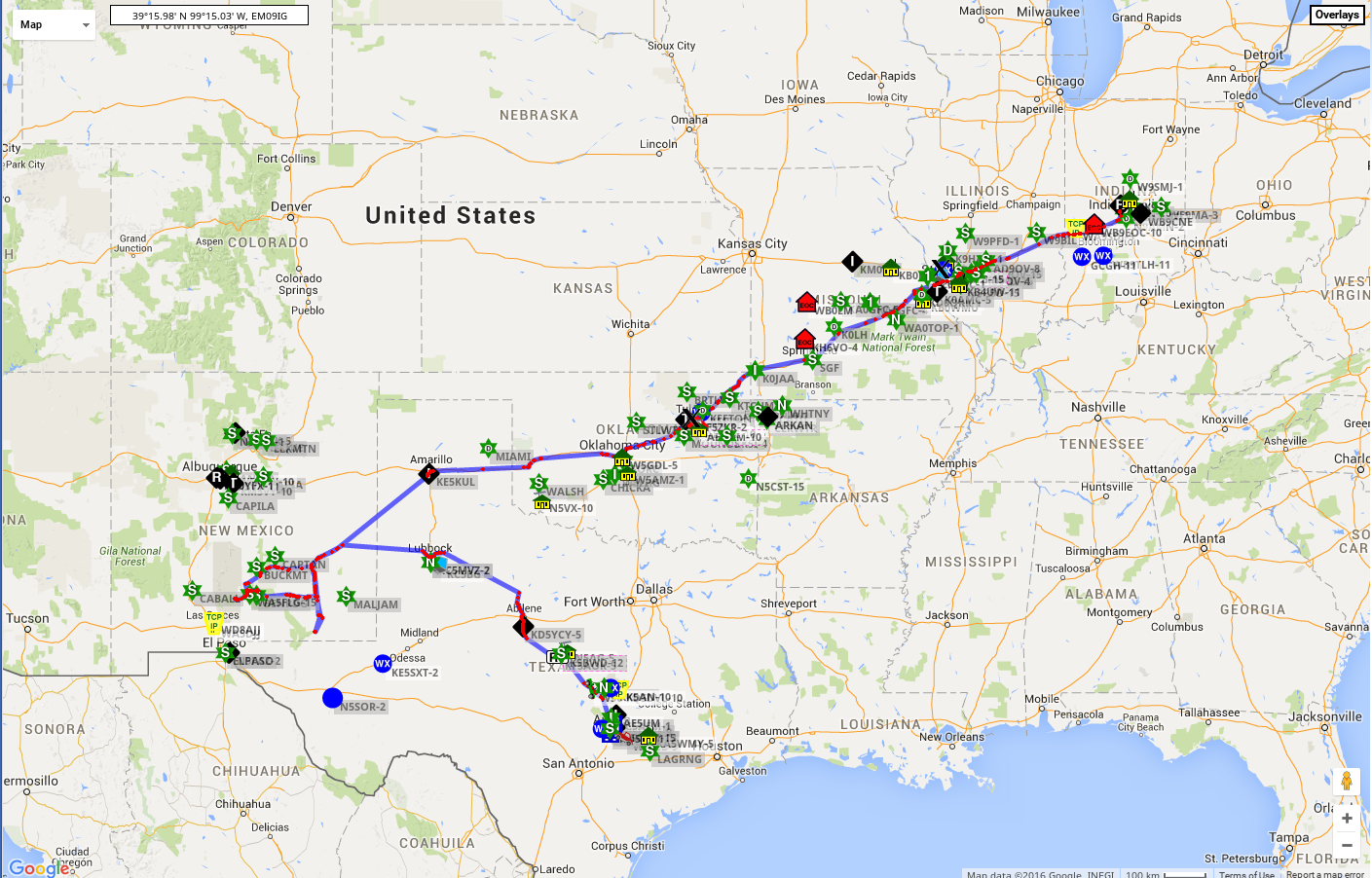 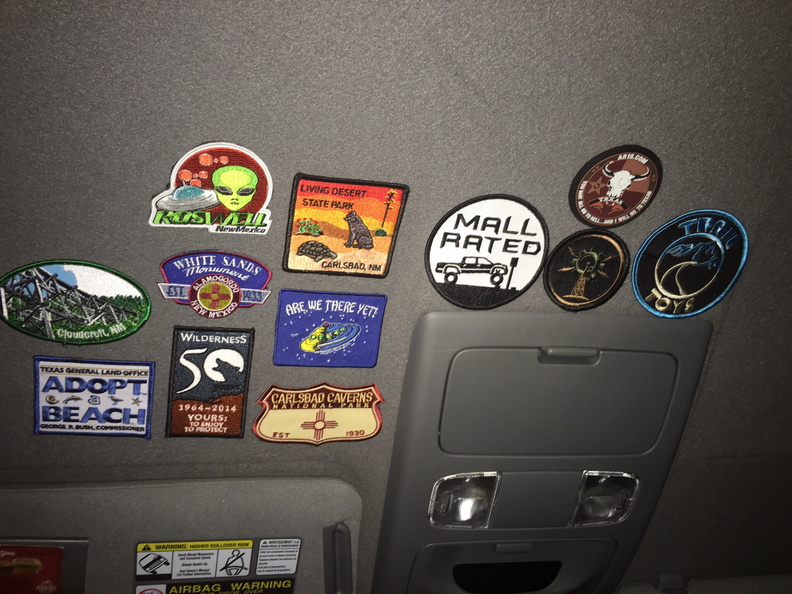