Anybody here use hammocks instead of tents? What are your pro's and con's? I've always used a tent because there's the dog, wife, kiddo, and myself to shelter, but I'm going on a solo trip for 10 days and have been exploring the idea of hammock camping.

I'll chime in since no one else has. I own a "jungle hammock" I picked up in my army days but have never used it to camp, although I have used it while camping. The main deterrent I can see to using one for camping is having the trees available to properly setup a hammock. That is especially problematic here in the desert. The times I do head to the hills and camp in a forested area I could see the possibility to use one, but the trees will dictate where.

If you could make it work the advantages are similar to using a RTT. You are off the ground away from creepy crawlies and wet ground in the event of weather. With the right setup for the temperature (hot or cold) you could be snug as a bug in a rug....just make sure you get it right. Otherwise it could be a miserable night.

I'd say it's worth a try, but have a backup the first time...just in case.
Reactions: Crispy

My next trip is to Oregon and there should be no shortage of trees to use. I was thinking about bringing my tent for backup. Hahaha.
Reactions: Roxxie, 20DYNAMITE07, brad312 and 2 others

Make sure you post a trip report.
Reactions: murps and Crispy

I'm not much of a writer, but I'll post tons of pictures for everyone here. [emoji13]
Reactions: Luis Merlo and murps

NorCalCrisp said:
I'm not much of a writer, but I'll post tons of pictures for everyone here. [emoji13]
Click to expand...

That'll do pig, that'll do.
Reactions: Roxxie, Pippinized, Robby and 1 other person

I got a hammock for camping years ago and havent looked back. I got one with a mosquito net that zips up. And i have a rain fly and ive never gotten uncomfortably wet.

The one important thing that i found out the hardway, is that your back will be cold. Freezing.

I have a down alternative bag, and when i layed down it would compress to absolutely nothing and whatever was facing down would be ice cold in minutes.

You def need a pad or a tiny blow up mattress, thats what i got.

They even make stuff for winter hammocking. Like a sleeping bag with two open ends that you put your hammock through.

My hammock and straps could almost fit in my pockets. I love the system.

And if you need a tent you think, they make hybrids. Basically tiny platforms on string of varying sizes. And also ones that hang from a center point. Pretty awesome stuff. Let me see of i can find some pics for you.

There's a forum specifically about hammocks, and mostly about camping in them at http://www.hammockforums.net/forum/forum.php

It is amazing all the cool stuff available, and like the off-road/overland market, there are a ton of folks making very specific bits and pieces for hammock camping. As @doobie_dave mentions, sleeping bags compress, and there is air passing under, so anything less than 70° is going to feel cold. They make "under quilts" that wrap around the bottom of your hammock to help.

For a bizarre introduction to hammock camping, take a look at the YouTube videos by Shug, a professional clown/juggler/cruise ship entertainer, as he takes you on a crazy trip

Reactions: Brewbud, Arcanus, TerryD and 3 others

Steve said:
There's a forum specifically about hammocks, and mostly about camping in them at http://www.hammockforums.net/forum/forum.php

It is amazing all the cool stuff available, and like the off-road/overland market, there are a ton of folks making very specific bits and pieces for hammock camping. As @doobie_dave mentions, sleeping bags compress, and there is air passing under, so anything less than 70° is going to feel cold. They make "under quilts" that wrap around the bottom of your hammock to help.

For a bizarre introduction to hammock camping, take a look at the YouTube videos by Shug, a professional clown/juggler/cruise ship entertainer, as he takes you on a crazy trip

I picked up a Warbonnet Blackbird double layer 1.7 and have a tarp for shelter. I still need a sleep pad to slip in and an underquilt. I'm going to try with just the pad and my sleeping bag.
Reactions: Steve

I have an Army one the BIL gave me to try this spring. I love the concept, but am yet to actually try it.

I'm looking forward to it. All I have is a sleeping pad and bag. There should be plenty of trees to hang from in Oregon for me. I like that I won't have to worry about the terrain or the ground being moist.
Reactions: hardtrailz

Why did I not see this earlier??? Prior to owning the X, my outdoor adventures were via my feet packing the crap in. Over the last 20 years I changed ALOT of my kit out, but for the last 8 years, one thing has stayed. The hammock. I started simple enough a Hennessy hammock. But after the first few uses I found anything below 70 sucks in it. So I went with insulation. Jacks r better, 30* top and under quilt. Great setup for 7 of the 12 months here. In the winter however I would always hunker down in a Kifaru shelter with stove and regulator bags. That is until I found hammock forums and yes, shug. That dude is nuts. Plain and simple.
Anyways, I ended up getting my first winter insulation and tarp. The insulation was a -10F Hammock gear top and bottom quilt, and the tarp a warbonnet superfly. Still using the hennessy hammock, but I had it modified by 2QZQ with a removable bug net, peak bag, and a few other things. Worked great, but I wanted to upgrade the hammock, which warbonnet hooked me up with a XLC dual layer. It has since been modified with whoopie slings and dutch hardware. I also added dutch gear to the insulation and tarp. Took 8 years, 5 different tarps, 2 hammocks, a dozen different setups, but I found what works for me and what I like. My daughter now uses the 2qzq modded hennesy and one of my warbonnet tarps with the JRB insulation as her setup. So its still seeing use. but she is limited to about 40 in it.

A few things, get a nice beenie, ever with nice insulation your head will get cold. Practice getting situation. As dumb as this sounds, nothing destroys a good night sleep like having to tweak your setup when the sun is down. Learn to do it 2nd nature and great, amazing sleep will follow. I sleep better in a hammock than I did at home so for about a year when the girl left me I actually mounted points in the bedroom to hang the hammock. they are still there and Ive used them a few time even after she came back....

Hope your trip goes well and please give a trip report, but here are some of my hammock photos to give ideas.

My go to showing the amazing hammock gear insulation on a solo hike to desolation lake. I was the only fool out there, temps were just around 0. 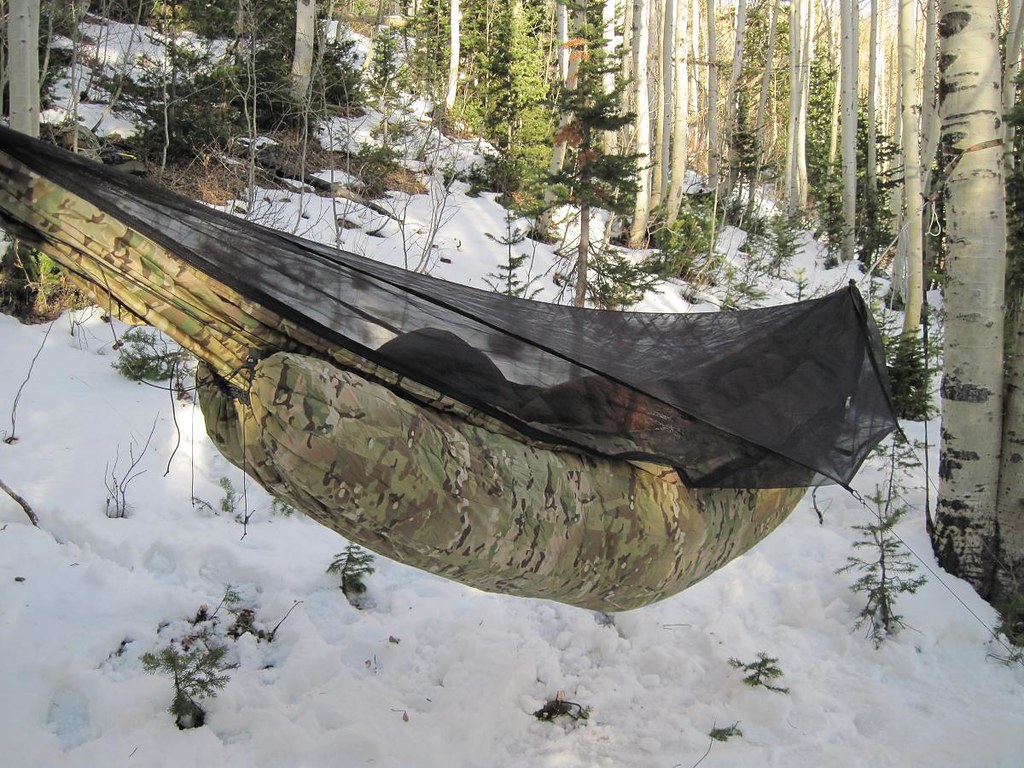 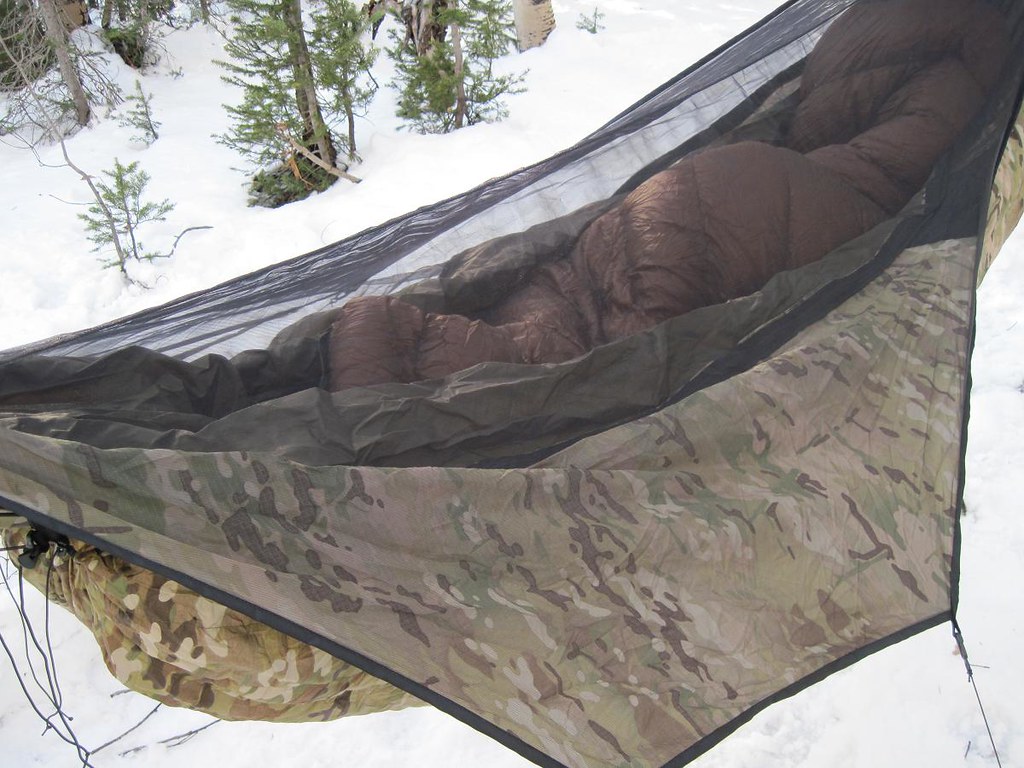 The hennessy with warbonnet extras. 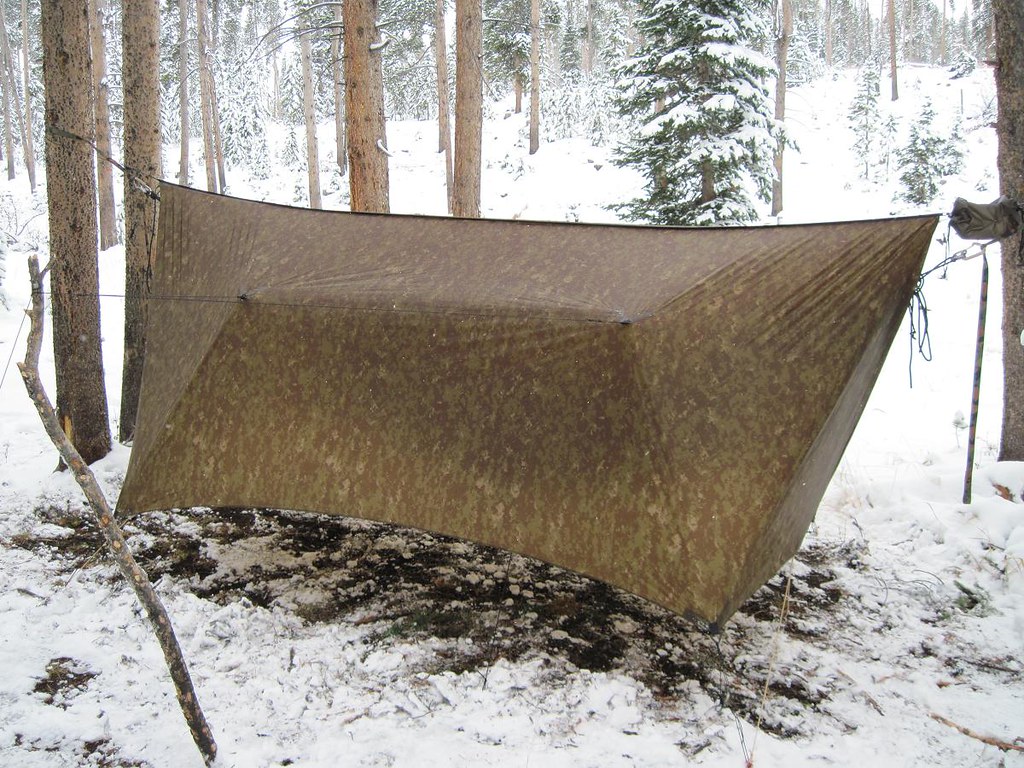 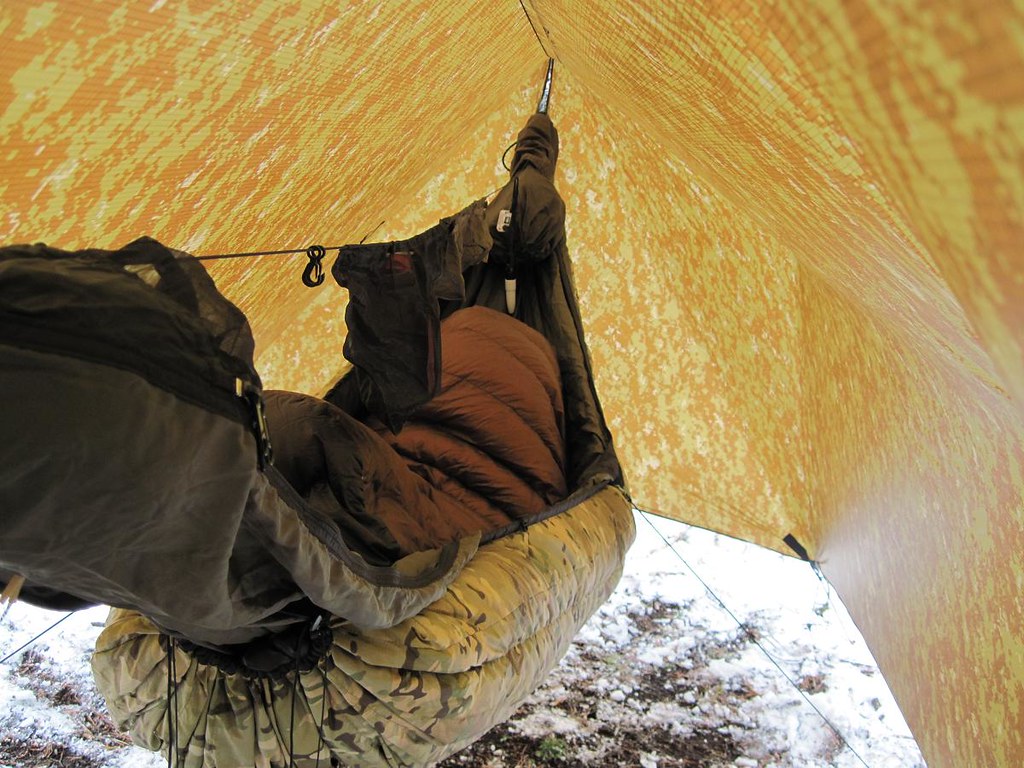 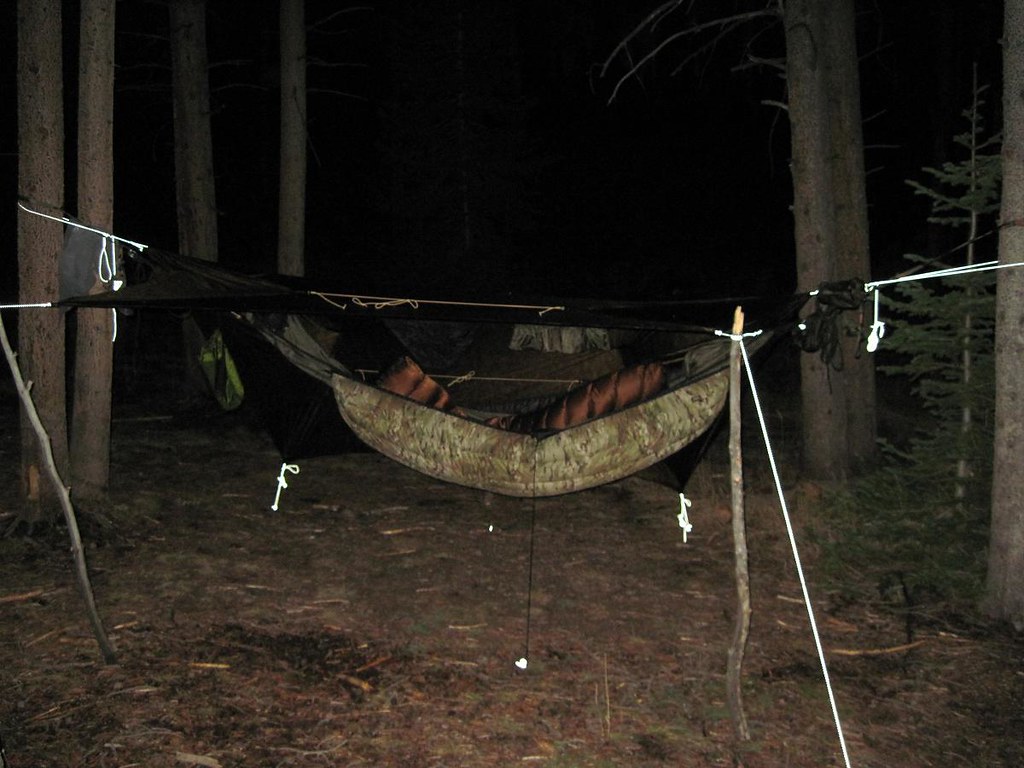 The old setup... still great however. 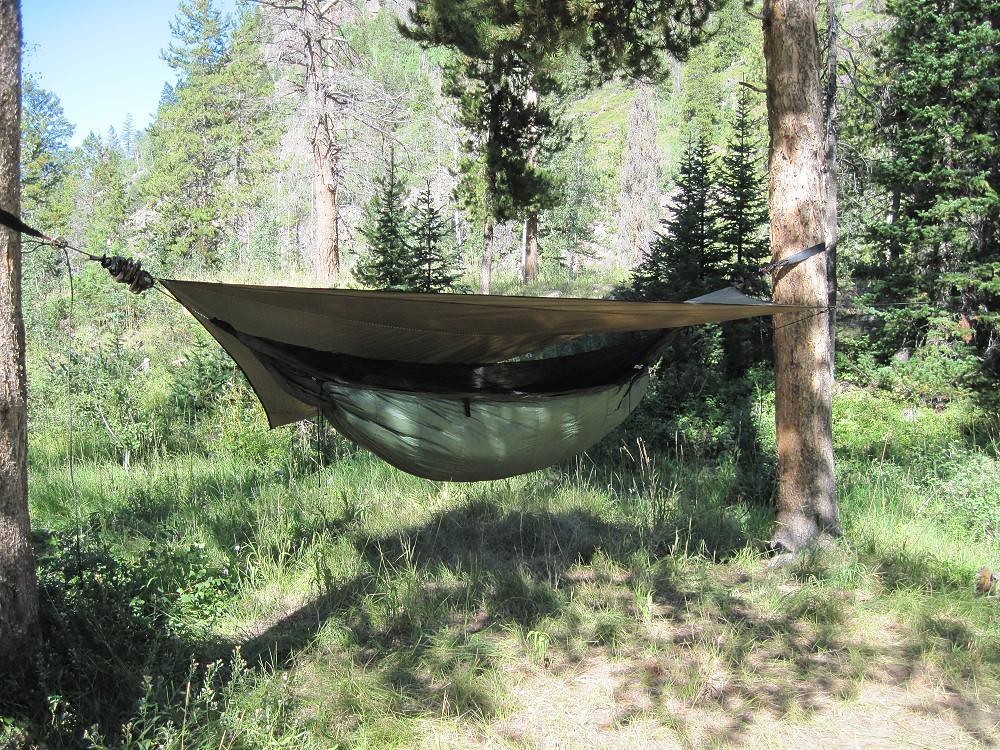 Reactions: Road, Railman, 20DYNAMITE07 and 3 others

@utspoolup great post, and surprisingly, I understood everything you said. A few months ago I'd have been like at most of the terminology.

I don't know if I could sleep in one. I can't sleep on my back, and don't think the work well for sleeping on your side or belly.
Reactions: murps

Anyone heard of the Hydro Hammock ?
Reactions: Voodoo 1
B

I am a Clark guy. I had a couple spine surgeries and hammock camping saved me. I love my Clark and haven't looked back.

CON:
they provide little insulation if you dont wrap oneself like a cocoon

Pro:
I can get the angle I need to sleep

everything packs into such a small space

so easy to make I've made several of my own, here my son is testing it out

I don't want to sleep in a tent ever again. I slept in my Warbonnet Blackbird for 10 days during my Oregon trip and slept like a baby.
Reactions: southernfire97 and expeditionnorth 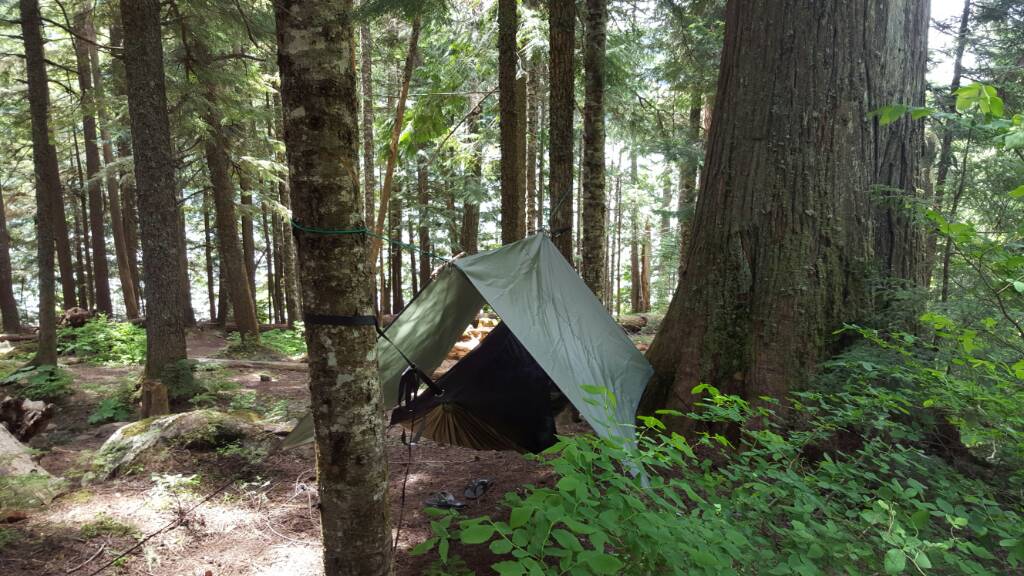 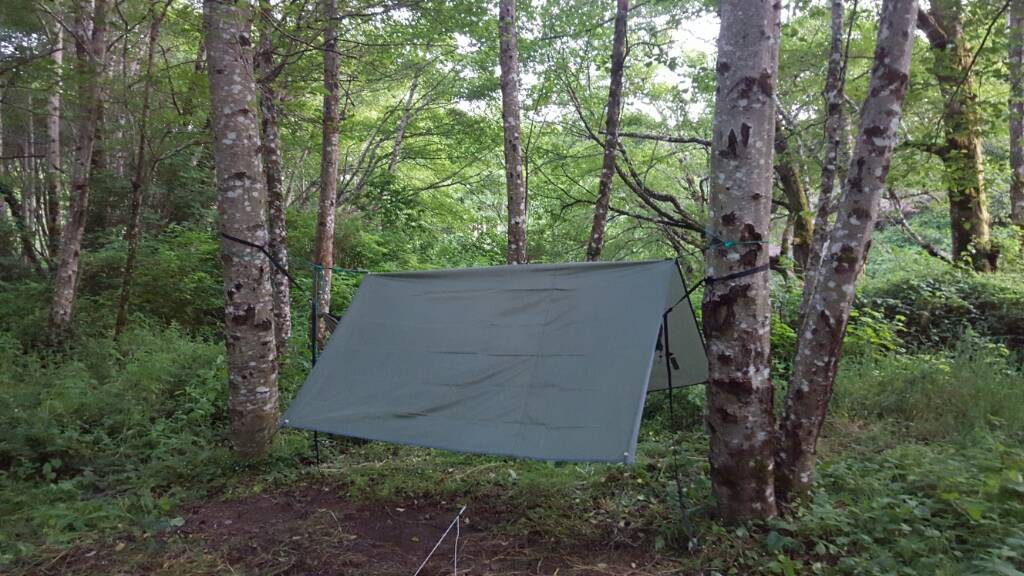 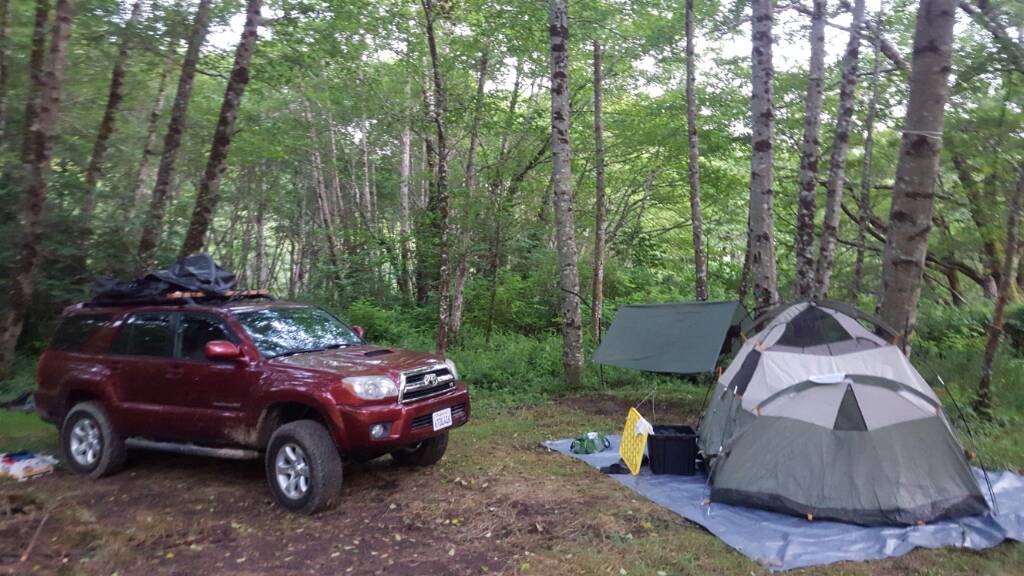