elizer said:
I have two elements with magnetic mounts. I have a rear engine van and its tucked in right when you lift up the hatch. I also carry a standard extinguisher.
Click to expand...

Mounted mine in the center console, using two Large Grip Hook (Everbilt) from HomeDepot...wanted to grab it in the middle , without offset/rattle

Those element extinguishers are interesting. Added to my shopping list.

Downs said:
We use those same mounts on our fire engines and trucks but in a rollover they may not hold very well. Nothing holds the extinguisher from sliding up and out of the mount.
Click to expand...

The ones I use have rubber 4 "buttons" on each arm for a total of 16 plus the 2 big heavy rubber straps. If you bend the metal arms to fit the extinguisher correctly and pull the straps nice and tight if the extingusiher comes loose it will be the least of your worries.

I've never in 25 years had one even be a little loose so I'm happy with them. 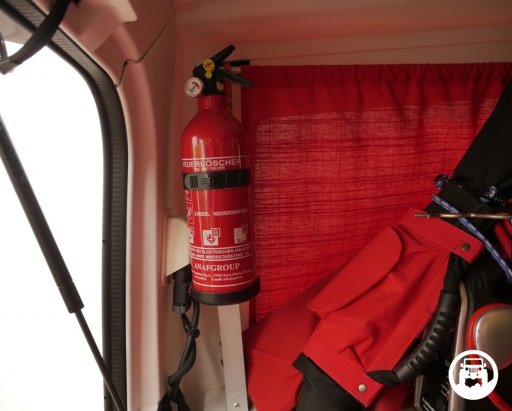 Every several months you should take your extinguisher out of the bracket and shake it to shake up the power inside. Constant vibration the powder settles and compacts and the extinguisher will not work properly.
On another note, Halon fire extinguishers ONLY WORK IN A CLOSED COMPARTMENT. Like the closed engine compartment in a boat. You would shut the blowers off an trigger the halon. It takes the oxygen out of the air so the fire goes out. If it was used in a cabin of a truck all the windows and doors would have to be shut. Engine fire keep the hood shut. Halon should never be used in a compartment like a trailer where people are. They will not work out in the open.
Reactions: augenholz

Has anyone ever used an Element E50 extinguisher on a fire? I'm curious as to how well they work.

ptgarcia said:
Has anyone ever used an Element E50 extinguisher on a fire? I'm curious as to how well they work.
Click to expand...

I carry one in my truck, but have never used one. In fact a friend and I are considering buying a spare so that we both have an opportunity to try it and see how it performs on a real fire.

I carry two of these in my vehicle.