Today we took the opportunity to get out and explore a little, the plan was to go up the Middle Fork of the Boise until we spotted the perfect Charlie Brown Christmas Tree. To do this in an expedient manner we went up a very dangerous road, (A road where a friend went off and lost his son), "Imagine Bolivian Deathroad" over a reservoir. The route starts about 11 miles outside of Boise, ID city limits. The road becomes sketchy approximately 6 miles after this. Going in was no problem it was a weekday early afternoon, we came across two other Rigs (Toyotas funny enough). 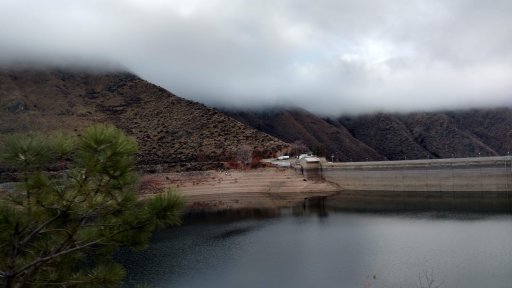 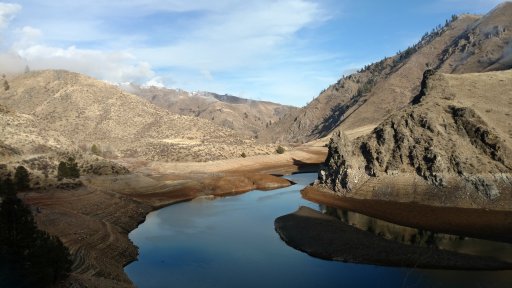 We then proceded past Twin Springs "resort" and along the Middle Fork of the Boise River, the temps being near freezing make all the little and big hot springs give up their secret! 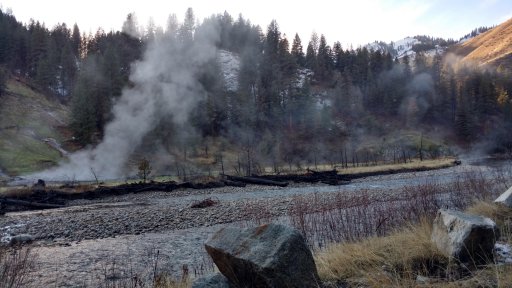 This section of the river is absolutely gorgeous, bald eagles hold sentry over this land. (Middle Right on top of the crag)

As we proceded up the road we were only seeing ponderosa pines, which my significant other doesn't believe to be a proper Christmas Tree, so we were a bit naughty and deviated from the road which we told others we would be on (Never do this). We turned west and started going up and up out of the 4000' valley we came across a couple acceptable Ponderosas, but I knew that on the western exposure we would find more trees and most likely a Fir. As we climbed we began to come across patches of snow, then the road was covered, 8" at the top... We stopped at the top and let the kids play, their noise spooked the heard of elk all the hunters were after in the valley below! They headed safer into the even higher country I kid you not hundreds of them! Wouldn't you know it a couple hundred yards below the summit along the road were several small Firs!! Wifey hiked down and made her choice so I dropped the Cruiser down so as to more easily plop the tiny tree atop. This was a mistake. 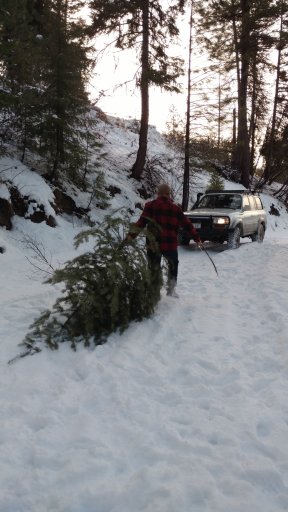 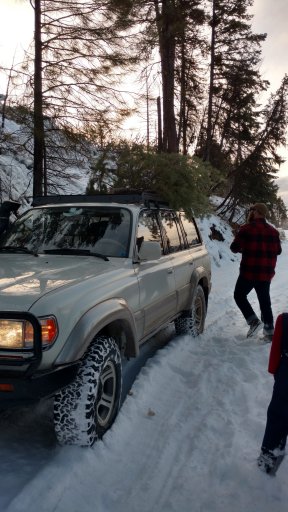 The original plan deviates here, even more, we had intended to drop down this western exposure to the North Fork of the Boise River and take a safer track out to Idaho city, but from our vantage point, we could see snow headed our way via some almost black clouds. We made the decision to do a three-point turn and head back up the hill and on down the hated road as we knew it was snow free. After several attempts in Low Range and only shuttering and sinking into the snow, I decided to try high gear and lots of throttle, this worked, It was a tense couple of minutes but we made it back up and over the top.

This moment of stress was nothing compared to the ride out the hated Arrowrock road, as we made it back past the Twin Springs "resort" a thick fog settled from high above the peaks, it was now pitch black and we could only see two or three vehicle lengths ahead. While it wasn't the worst of situations the thoughts of our friends going over the edge and losing a child weighed heavy on our minds even though neither of us mentioned the thoughts. Needless to say, we took out time and slowly navigated the winding reservoir road. We made it to the dam and stopped to breathe a sigh of relief and pee.
Reactions: Adventure Dave, Bowtied13, CR-Venturer and 1 other person
You must log in or register to reply here.
Share:
Facebook Twitter Reddit Pinterest Tumblr WhatsApp Email Link
Top Bottom