Our next trip will be to Europe biggest Adventure and 4x4 event. This is at Bad Kissingen Germany and similar to the Overland Expo.
It will be a four day visit and a nice trip there I guess. Just around 400km to drive.
If we have enough time, better said, if the Van is ready in time, we will drive up there in two days and do some little roads on our way.
This is the link to it.
Adventure & 4x4 event Bad Kissingen

We will be there from wednessday evening till sunday afternoon.

Well, maybe we will see and meet some european Overland Bound member there. We could make a nice party there.

Sounds like a great trip. Have fun and post pictures. Ve vant to see how za germans do an expo.

Ok, we will, do pictures and video's.
I still need to make the Wales video hehehe. But hey, that is ok, will have time soon to do so.
One of the nice things is that the expo and the camping area are both a pleasure to be. What they sell at the Expo, you will find at the campsite.

after lots of work we are of and away. When internet connection is ok I will report here.

Enjoy the trip Robert, and be safe!

Well, back home from a wonderful longer weekend. Better said, almost a week.
First of all, we had a little problem about a spare part that had to come in on tuesday. So, it actually came early, I could build it in farly quickly and with just a little delay, mostly due shopping and filling up LPG and Petrol, we headed towards Germany.
I thought, well we are late, so probarly we are going to have some traffic jams on the way. But, lucky us, none so ever.
After a few hours drive on several Highways and a quick break on a parking lot we ended up at Felsberg in Germany near Kassel and set camp.

We found a little campsite and even as it was located in a beautiful setting, it was just a very ugly campsite. But, we just stayed for the night, so who cared.
Still, if you look well, you did find some nice things to look at.

So for the first time we did set camp, and we tried everything, and more, but we already found things to improve and different ways to do so. Which was good, as we knew now, tomorrow at Bad Kissingen setting up camp would go better, smoother and nicer.
But this was our first trial.

The Tarp still needs some adjustment. I wasnt pleased by the sloppy look of it. 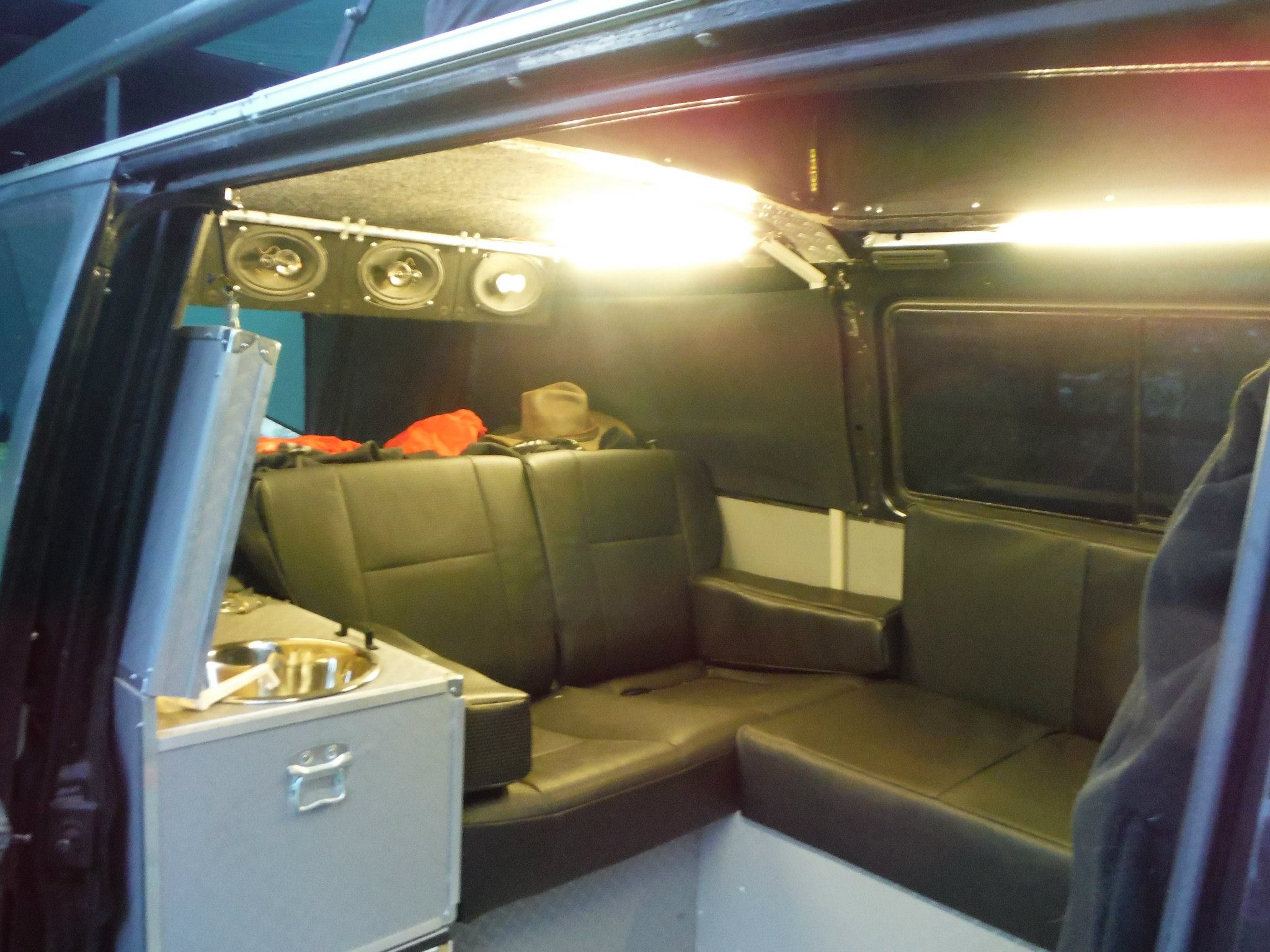 Interior looks nice now. Even in use.
And our "cockpit" is now more free as it ever was before.

Camp has moved from the side to the back of the Van.

At the back, due of the Tarp we have a nice and cousy spot to sit when rain or bright sun is there.

and without the Tarp the tent and Van look nice.

In the morning I tried some different little things for the Tarp and I guessed, at BK we will have it better and nicer.
A good breakfast and packing up we were almost done for the last part of our trip. But, a squeek in the trailer set everything on hold and we had a look underneath. We found that during the last build of the trailer, I, stupid me, didnt aligne the axle right. So one wheel was touching the body of the trailer. Scraping of the rubber of one tyre. Lucky us, it wasnt bad, so we could safe the tyre and fix it.
After that we had to speed up a bit as we did knew that at BK we had to be early if we would like to have a good spot.
So instead of heading there over smaller country roads, it was still some Highway to drive.
Coming at Bad Kissingen, we found that the best spots were already taken and if you would like to have those, you need to be there at sundays. A week before. Well, we cant, too bad.
Anyway, we set up camp and everything went smooth.

After some hours it was more crowded and after a day, we were completely packed in.

The next day we went up for our first day of visiting the actual event. Even if you can see all the things they sell and show in the actual show, in the campsite, you still like to go up to the Event itself.
On the friday we had a great talk with a Storyteller and Filmmaker, called Andrew St Pierre White and we did a clinic with him about filming and telling a story with video.
That is why I think, I should learn more and more about it and do things over. So, a promise here, to film more next year.
After the clinic we had again a very good talk with him and his wife Gwyn. And we invited them to our spot, as they wanted to film in the camparea. So, they came and we had a good BBQ and terrific talks about Overlanding and all that kind of stuff.
The saturday and the sunday were in the sign of buying, but that didnt work out well. As I couldnt find any proper suspencion kit for my Van. So, I bought one online during the evening. I hope it arrives this week.
We bought some little things which will make live easy. Bandages and repair stuf. So minor things which will be big if you need them.
During these days we met a lot of people. The neighbours on the campsite, firends who came and had a visit. We grilled, talked, laughed a lot and it was again a good long weekend.
On the sunday, I just took some time to make some little impressions about the campsite. Hope you like them

On the sunday we said goodbye to all our new found friends, neighbours and more and went back home.
We are always a bit lucky as we have friends living about half way the trip. So we visited them and had a good chat and last BBQ.
Then it was really time to go home. Driving Highway again, talking about all the things we saw, we liked we like to adjust on the interior, to the Tent and more. And finally we came home.
Parked the car, put the trailer on or drive and then we hit the sack. It was a perfect weekend. And as we were home, sound and safe, it turned out to be a perfect weekend.

We have to do loads of things to the Van and Tent. But, we know now, we did a good job about that, and are happy with it. We found loads of new ideas the copy. And we will do so as well.

In 2016 we will go again, with all the things we learned, it will be even better.
See you then.