Sharing my 2016 RAM Rebel build as it's about to evolve a bit in the coming months before Overand Expo East.

First, I bought it new in 2016 and it's been a really great truck. My other vehicle was an '08 JKU Rubicon, and is now a 2018 JLU Rubicon. That build thread is here: https://www.overlandbound.com/forums/threads/damons-rubicon-jlu-build.13585/

Since I already have the Jeep, my truck is mainly used for hauling bigger loads, cross country trips with the family, and less severe trails than the Rubicon. The 2016 has a limited slip rear locker, 33's stock, and an air suspension to get more ground clearance on trails and is pretty capable, but is not at the capability level of a Power Wagon. (Side note, the new 2019 Rebel now has a locking rear diff)

I started by adding an ARE cap to the bed and a Yakima roof rack and Megawarrior basket. I'm the Product Manager at Jackson Kayak and launched and am Brand Manager of Orion Coolers and now Orion Kennels, so I'm carrying large plastic items either on the roof, in the back, or on a trailer.

After that I added a DECKED drawer system to the back, which helps in keeping gear organized, but eliminates the wheel well geometry in the bed, creating a completely flat platform if I'm alone and wanting to sleep back there on a Thermarest or something. On the left side of the DECKED I keep tents, Goal Zero battery and solar, and daily living things. In the right DECKED drawer I keep recovery gear like traction ramps, shovel, machete, straps, things like that.

I have around 60k miles on the truck in a couple years. It's done great on big adventures like driving from Tennessee to a moose hunt in Newfoundland, bear hunt in Quebec, antelope and mule deer hunt in Wyoming, kayaking adventures, archery and overland events, etc.

I've used the truck towing an XVenture XV-2 Trailer, and a teardrop from 865Campervan. Both tow like nothing behind the Rebel.

Sometimes I'll also use Pakmule hitch carrier. They're the best I've found -- 500 lbs capacity, and easy to carry and load/unload from the hitch by yourself.

My next steps are changing out the tires from the stock 33" Toyos, to Nokian Rockproofs. They'll go on the next time it's in for service.

I recently changed the Yakima roof rack from round bars and MegaWarrior rack to their new Jetstream aero bars and Offgrid rack. I'll have a video of that change to share soon.

I'm changing the awning from a single Yakima to a pair of 99" CVT awnings, one off either side. On one side I have their wall tent and floor as well. With dogs and baby I just like ladders, and I need my roof to be useable space for loading kayaks and coolers. So with this new setup we can have one awning for hanging out under, and me to use as booth space at events, and then living under the other in the wall tent with cots, Pack N Play for our baby son, dogs in and out, etc.

I'll update here as it evolves, but here's some pics from past adventures. If you're considering a full-size truck as an overland rig, the RAM Rebel is worth a look. 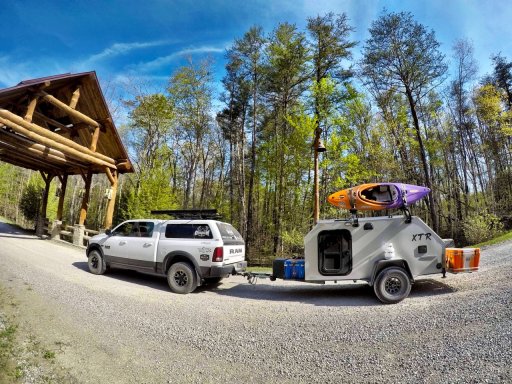 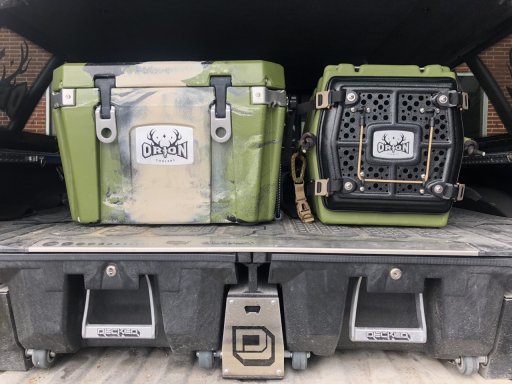 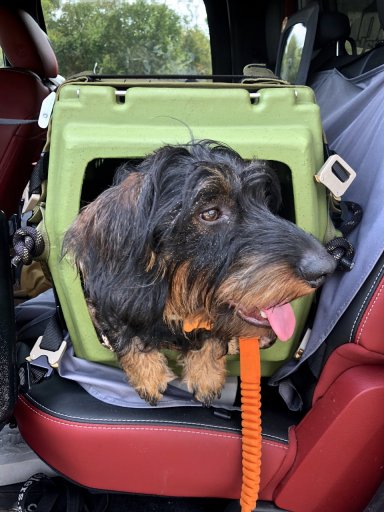 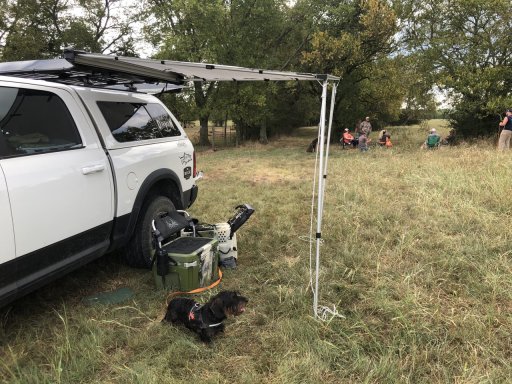 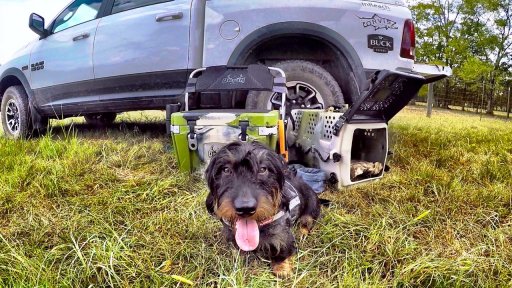 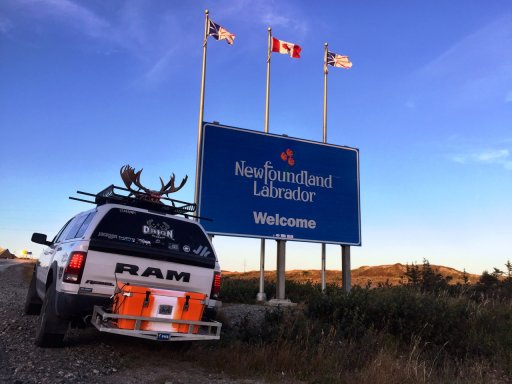 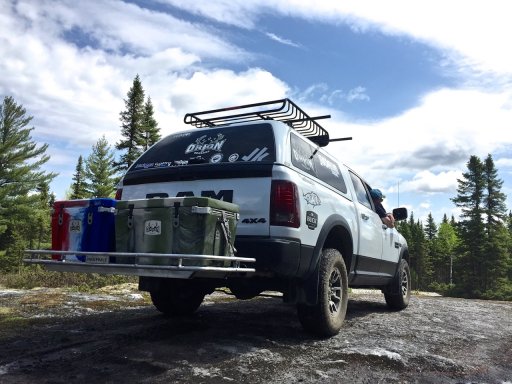 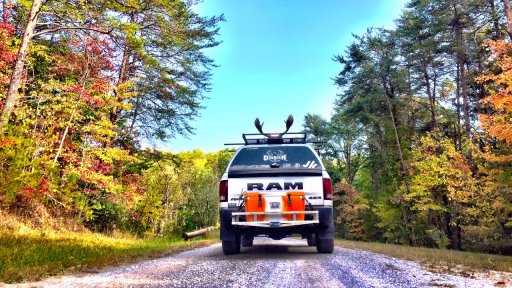 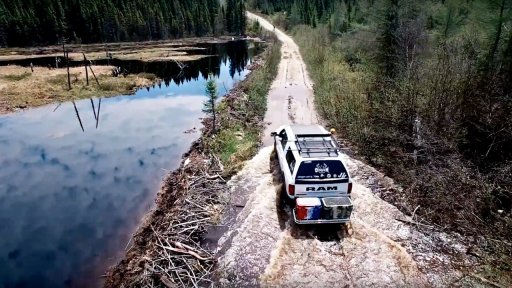 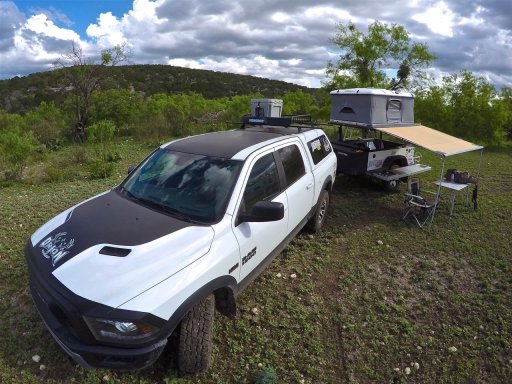 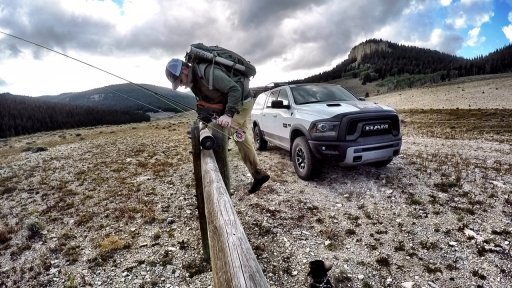 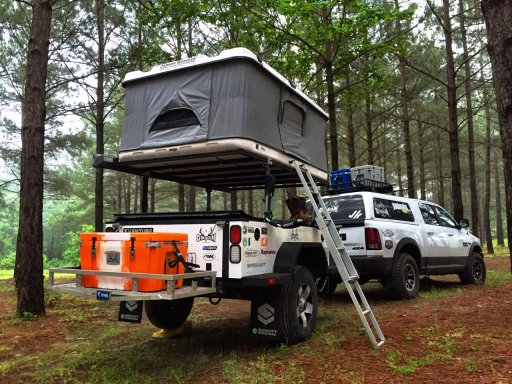 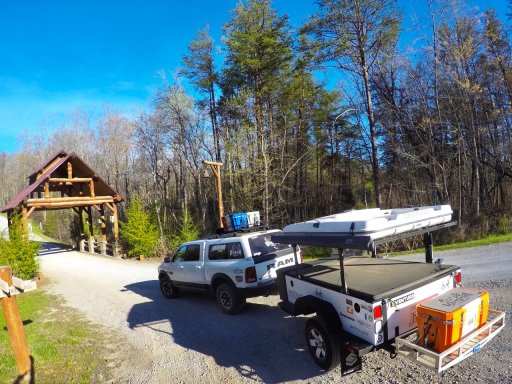 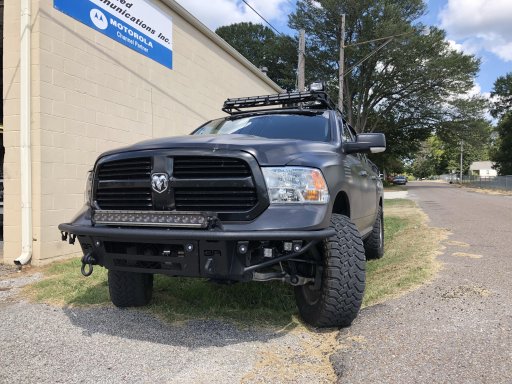 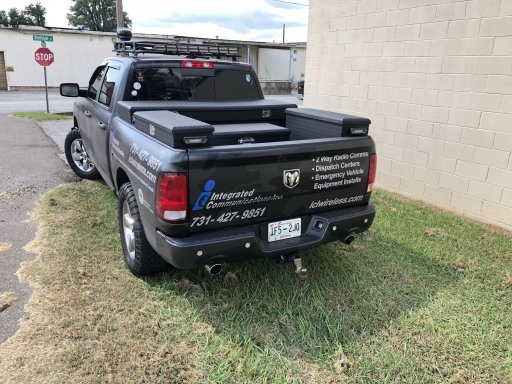 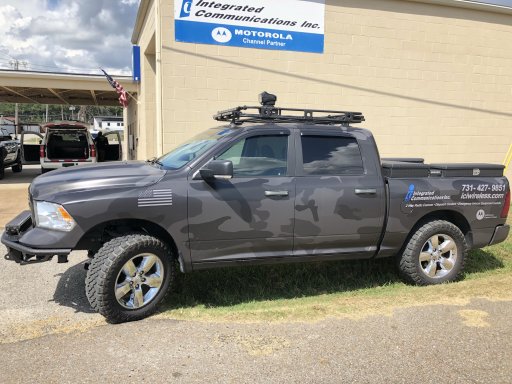 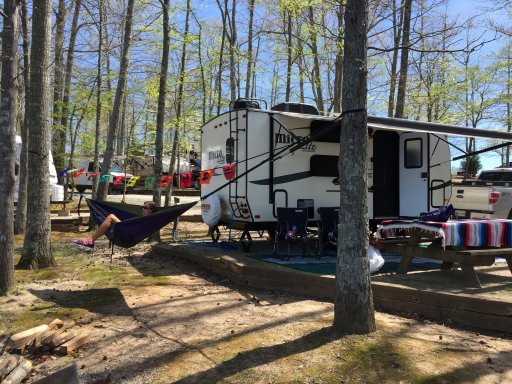 Cool Rebel. This is my 2016 RAM 1500 build. I usually pull the camper and set up a base camp, but we choose when not pulling the camper to ground tent camp. It has 35" Falken MTs and is due for a new set. It will be getting a Rough Country 4" lift with Nitro Shocks. I haven't decided on wheels just yet. I may keep the factory ones.

It has a Smittybilt roof rack and a Body Armor Desert series front bumper.

I am a vehicle upfitter in Jackson Tn. and we sell Feniex lights and 8EVP lights. They both have an offroad line. The lights onthe rack are Feniex emergency lights. I have an 800 bar that is amber and white, and 2 400 bars on the front, 1 blue and white the other red and white, they both have the capability to go steady white. The rear has 2 800 bars. 1 blue and white and the other amber and red. Blue and white goes steady white and the red and amber can be used as a directional arrow for traffic. The front bumper has Feniex AI series 40" bar that has the capabililty to dim and to focus from flood to spot with the turn of a dial and has the option of GPS mode that changes from flood to spot based on programmed speed. I have Feniex Cannon lights underneath for rock lights. They have three modes. All white, all steady burn color (front red, middle white, rear blue) and the flashing color. I have 2 Rigid lights mounted on the rear side boxes for taillights, bed lights and rear spots. It has 4 8EVP cube lights mounted on the fron bumper the are amber DRLs and white driving. I've also mounted a Golight remote control spot to the rack. I've mounted a 6" 8EVP flood to each side of the bed. The switch system is a 4200 controller from Feniex and I also have an sPod controller.

The bed has been Rhino lined as well as all the boxes.

Future plans are the rear bumper and sliders from Body Armor.

Update on the build.

1) New pics show the Off-Grid. It's 'OG' grip attachment for shovels or paddles is much easier.
2) Now have 2 CVT awnings on either side. That lets me put an awning off one side, and build living/camping room on the other. This is helpful at outdoor events where I have a booth and need to display product on one side, but also camp in the booth. They come on and off very easy from the track system integrated into the Yakima Jetstream bars.
3) OE tires finally ran out of life and changed to Nokian Rockproofs. 10-ply beefiness. 33", and now spare is also full size 33". Not sure why they'd include an undersized spare from the factory on Rebels, but they did. There was clearance underneath though for the full size 33.
4) Added White Knuckle Offroad Sliders. Awesome full strength sliders that bolt down around the frame rails. Took a few hours to install with a friend, not that bad. Provide a good standing step, full strength jack points and excellent protection. 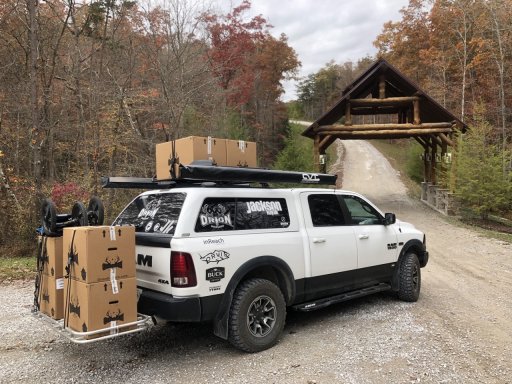 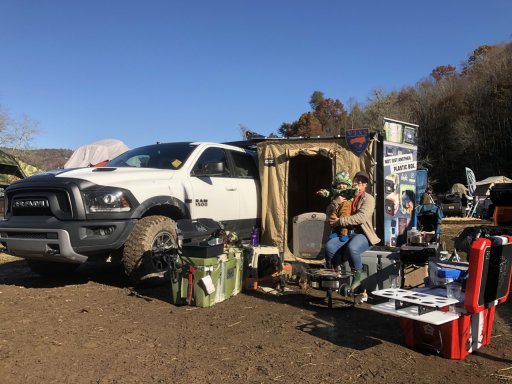 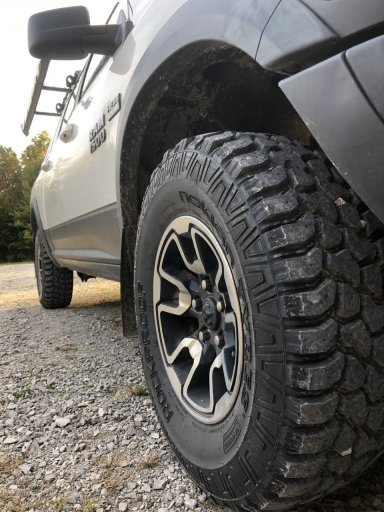 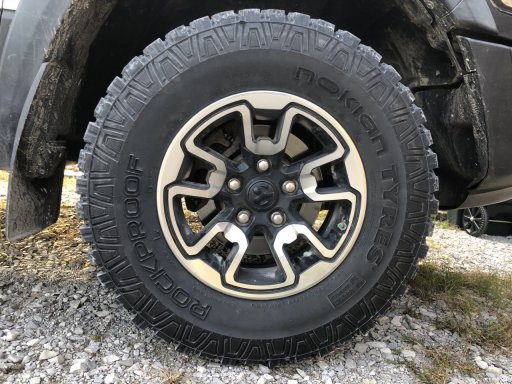 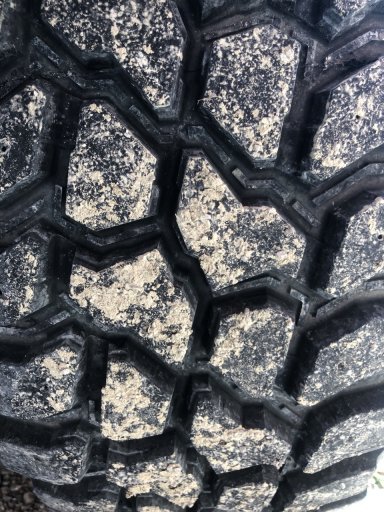 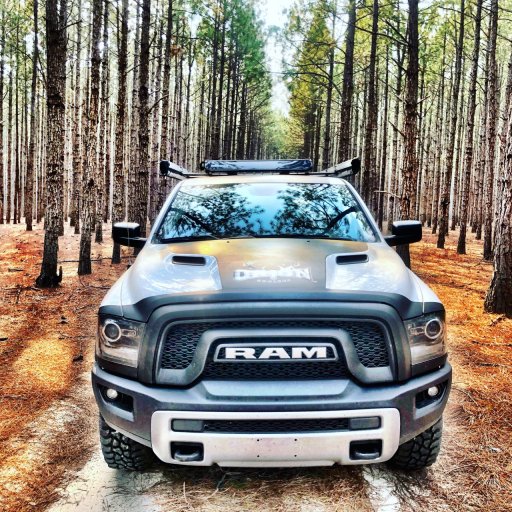 Nice looking truck. I think you have way to many coolers, I can take one of those bad boys off your hands for you
Reactions: dbungard